The Herald's bid to break the silence

The New Zealand Herald's current campaign on youth suicide is one of the most sustained and substantial media initiatives of recent times. Mediawatch asks the prime movers of 'Break the Silence' about reporting sensitive stuff in a high-profile way, and how the Herald deploys the country’s biggest investigative reporting team. 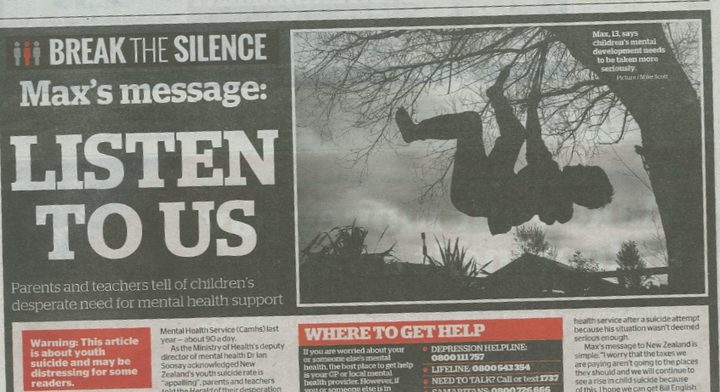 Major news organisations in New Zealand have been cutting back under economic pressure for years. The ranks of full-time journalists capable of carrying out major investigations of issues of real public interest have thinned out.

But The New Zealand Herald - and its publisher NZME - has bucked the trend by creating and backing a team of investigative journalists.

Herald planning editor Chris Reed told Mediawatch the ‘I-team’ is now 13-strong. It brings reporters like David Fisher, Matt Nippert and Kirsty Johnston together with data experts and specialist videographers throughout the newsroom.

"I'm a strong advocate for everyone in the newsroom having the chance to do this kind of journalism," said Chris Reed.

Listener journalist Rebecca Macfie told Mediawatch last week the Herald's in-depth work was impressive but it can be hard to find on the Herald’s website. The chief editor at the NZME Shayne Currie acknowledged that at a recent conference on the state of journalism.

But the work has certainly been front and centre lately in a campaign addressing the scourge of youth suicide: Break the Silence.

Chris Reed says the series was sparked by a series of self-inflicted deaths in the far north last year.

"Other media were going there and doing 'shock horror' stories about 'the suicide capital of New Zealand'. We wanted to take a more considered approach," he said.

The Herald has carried Break the Silence stories and updates from the campaign every day since the start of July. On nzherald.co.nz there are now dozens of stories in a special section dedicated to the issue, with NZME's radio station websites also supporting the campaign.

Running over five weeks in print and online, it is one of the most substantial and sustained investigative local journalism projects in the multimedia era - and the role of the media has been an important part of the backdrop.

The campaign was supported by NZME's other media outlets including its radio stations. Photo: screenshot

"Silence on suicide became orthodox in New Zealand in the mid-1990s after the number of teens killing themselves overtook elderly suicides for the first time," said the Herald in a piece launching the series.

"The media started aggressively covering youth suicide and experts disagreed on the consequences of this newfound spotlight. Researchers nudged officials towards international studies that showed media reporting suicide could cause copycat deaths or ‘contagion’ . . .

Over the past few decades, international guidelines on suicide reporting have relaxed, with progressive researchers claiming earlier studies on the copycat theory were selective and misleading. They say New Zealand’s gag orders go far beyond best practice and talking about suicide will help tackle the stigma that smothers it."

- "What becomes of the broken-hearted?" - New Zealand Herald

"We've tried to analyse why this has been regarded as a taboo topic in New Zealand - more so than any other  developed country - even though our rates (of suicide) are so high," said Olivia Carville.

The high profile of the campaign is clear evidence of its strong commitment to the coverage of this important issue, but its also presents a particular problem.

Many journalists agree with campaigners that the issue has not been adequately aired in New Zealand, and this has held back efforts to reduce the high rate of youth suicide. Editors have long complained the Coroners Act prevents them fully reporting the issue.

But many experts in suicide prevention believe intense and prominent media coverage can actually trigger suicidal thoughts and increase anguish of those suffering. And the law does not prevent the media airing the issue of suicide in general terms, or even specific cases which once they have been through a coronial process in full.

"We have given may different people a voice in this series," said Olivia Carville.

Does that include experts opposed to intense media coverage?

"We've tried strenuously to involve people from all sides of the debate," said Chris Reed.

"Some have chosen not to not to take part. That's their right, but we've given all parts of the discussion ample opportunity to join in," he said. 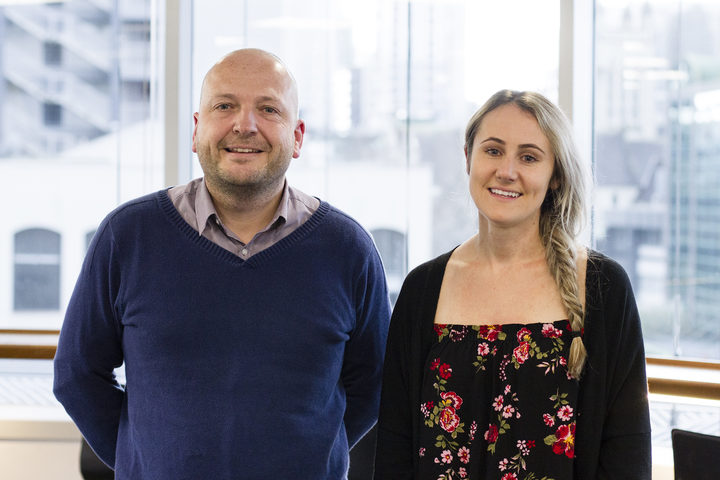 Working at the Toronto Star in Canada in recent years, Olivia Carville reported self-inflicted deaths in much more detail. She acknowledges that the 'precautionary principle' behind restrictions on media reporting is valid and the risk of copycat behaviour is real, but she says it also possible reports which include grim details of self-inflicted deaths might actually reduce the copycat response.

The Herald's Chris Reed told Mediawatch he has never worked on a project where more care was taken over the welfare of the people at the heart of the stories.

The multimedia piece that kicked off the campaign - What becomes of the broken hearted? - is a discomforting account of the fallout from recent youth suicides in Northland. It concludes with a portrait of the younger sister of a teenager who took her own life last year.

"Whatever new suicide prevention programmes are launched next year with the millions of dollars set aside for mental health, it’s come far too late for far too many. But it's not too late for Destiny," wrote Olivia Carville alsongised the image of the girl.

That's tough exposure for a youngster still dealing with loss.

"I became really close to the family. They knew what they story was going to say, what pictures we would use and exactly when it would be published. They're the heroes of this series," she said.

"Destiny is 14 and of course she is vulnerable. But she deserves a voice in this and we didn't make the decision lightly," she said.

The Herald's Chris Reed told Mediawatch he has never worked on a project where more care was taken over the welfare of the people at the heart of the stories. He says the Herald is following up with all those featured in the stories after publication.

Will the Herald be calling for a political response when the campaign ends in two weeks? A demand for more and better mental health services? New approaches and methods?

"We haven't worked out the final part but we will have strong conclusions to draw. We may not call for specific action in every single case but we're satisfied that we have a snapshot of the situation in 2017," said Chris Reed.

"We've been reluctant to make this a political issue or push any agenda. We want positive things to come out of this. Every week we've featured a different charity. One told me they had 250 donations under the Break the Silence banner. That feels like something that's made a difference," said Olivia Carville.

Or if you need to talk to someone else: