Heard the one about the Aussie comedian, the Tongan teenager and the New Zealand TV channel? No-one’s laughing now after Māori TV's top brass stepped in to dump a controversial comedy after one episode. 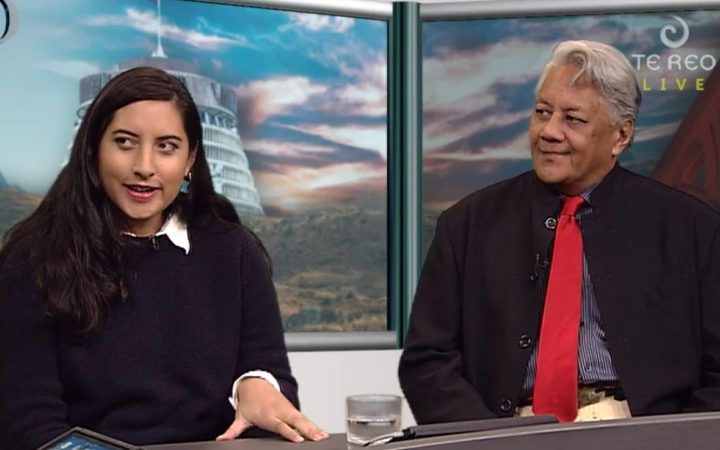 Trish Tupou and Will Ilolahia debate the dumping of 'Jonah From Tonga' from Māori TV. Photo: Screenshot

Jonah From Tonga screened here on Sky TV's Comedy Central three years ago without controversy. All six episodes have also been available on the New Zealand service of Netflix since March 2015 without fuss.

The title character, in fact, first appeared here on TVNZ 1 in 2013 as one of the cast of characters created by Australian comedian Chris Lilley for his mockumentary Summer Heights High.

Lilley - in 'brownface' makeup and a frizzy wig - played the Tongan teenager's schoolyard delinquency mostly for laughs in that show. In the final episode, Jonah was hauled out of his remedial reading class kicking and screaming after his family decided to send him to Tonga.

It was a confronting scene, yet no-one in New Zealand complained publicly about Jonah back then either.

But when Māori Television aired the first episode of Jonah From Tonga - a spin-off series that picks up the character's story - on 29 June, the reaction was immediate.

On RNZ National's The Panel, business leader Peter Fa'afiu - who is Samoan and is the chair of Amnesty International NZ - said: "I don't need a stereotypical Australian lens on Pacific Islanders."

It appeared it already had.

"I was asked by Māori Television what I thought and I put out a quick survey with some Tongan people both young and old. The overall feedback I got was that it's great to laugh at ourselves now and then," New Zealand-born Tongan community leader Will 'Ilolahia told RNZ Pacific’s Dateline Pacific.

His niece, a programmer at Māori Television, had asked him to do the research.

On 29 June, Māori Television insisted the series would continue. Two days later, board chair Georgina te Heuheu announced the board had withdrawn Jonah from Tonga because "the values of Māori Television include respecting all communities".

Māori Television would not be providing any further comment, she said - but many others did.

“What the community told me is basically what’s wrong with having a laugh. I’m saying Tongan people have said that they’re actually laughing at Chris for trying to be a Tongan,” Mr 'Ilolahia said on Māori Television news show Kawe Kōrero last Tuesday.

On the same show, cultural commentator and Fulbright scholar Trish Tupou, who is Tongan, backed the dumping of Jonah From Tonga.

"It may not be to everybody's taste but... when I talk to some of the young Tongans, they think it's funny. I'm really disappointed in Māori TV," she said.

Mr 'Ilolahia complained that politicians and board members had undue influence on the decision to dump the controversial show.

The Māori Television Service Act says ministers and MPs or anyone acting on their behalf must not direct Māori Television in respect of a particular programme without the authority of the board.

And it may not be the last time the board has the final say.

On Radio Waatea last Tuesday, Māori Television's Georgina Te Heuheu said the board was planning to vet the channel's programmes more rigourously in the wake of Jonah from Tonga.

“I think all boards would have an expectation that they'd have advance notice. There’s an upside in reminding ourselves of our purpose in life," she said.

"If you want to consider whether or not ... the Jonah series fits with that purpose, then the answer is really quite simple," she said.

But is it? Screening Jonah From Tonga on Māori Television was a judgment call that involved weighing up aspects of Australian, Tongan and Māori media and culture.

Close vetting of upcoming schedules by a board comprised of former politicians, lawyers and programme-makers puts the programmers at Māori Television in a very difficult position. It also makes it far more likely shows that could cause controversy will never make it to air.

And - unlike the final five episodes of Jonah From Tonga - Māori Television's viewers will never know what they missed, or why.