TVNZ’s multimedia series What Next pondered New Zealand 20 years from now. Over five consecutive nights, it aimed to spark debate about big issues facing us all, and even prod politicians into action. Did it succeed?

TVNZ really, really wanted you to watch What Next, judging by the blizzard of publicity in advance.

There was a slew of ads for it on TV and online. The Sunday Star Times last weekend was shrouded in a wrap-around cover promoting the show. Mike Hosking even ate a deep fried spider live on Seven Sharp to help hype the show. 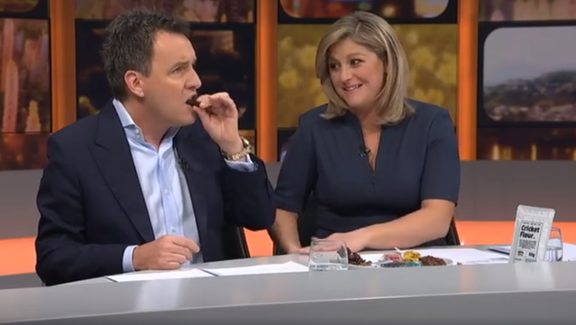 20 years ago, factual programmes about important New Zealand issues were common on TV in primetime.

They're not now, and a series of them screening across five consecutive nights is unheard of.

But What Next was more than a mere TV show. TVNZ called it a LIVE INTERACTIVE TELEVISION EVENT designed to get people at home responding to questions about our environment, our economy, new technology and pressing social issues.

And they'd gone to a lot of trouble building a special set in a basketball court as well as a dedicated website, on-demand platform and a live online polling operation.

First TVNZ reached out to its online audience with a questionnaire a few weeks ago. The findings from that were relayed in the TV show nightly and viewers were then asked to respond to more questions about those topics during the show, with the results given out at the end.

Each programme was followed immediately by a panel of five futurists having a live on-set chinwag on Facebook about the issues raised.

The show was was presented by John Campbell and by Nigel Latta, who fronts almost every TVNZ factual show on prime time these days. In fact, Latta's own company makes his shows for TVNZ. 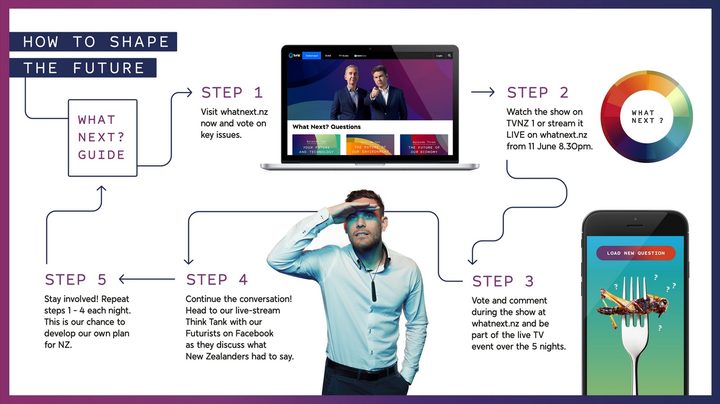 The interactive plan for TVNZ's 'What Next' Photo: screenshot

They teamed up with the University of Auckland which took the opportunity to push its brand and the boast it was "New Zealand's leading university." And the public also had a big stake in What Next. NZ On Air put $1.2 million into the project.

Was it any good?

What Next’s opening show was all about the breakneck pace of technological change throwing up dilemmas: were driverless cars, robots surgeons and auto-piloted planes good things?

When voters at home proved almost evenly-split on that, the hosts claimed “half the country was saying yes - and half saying no."

It might have been if we had any idea how many people actually said so, but viewers weren’t told the number of voters. The What Next website broke down the answers by age and by gender, but there are no numbers there either.

Sometimes the questions themselves were a problem. 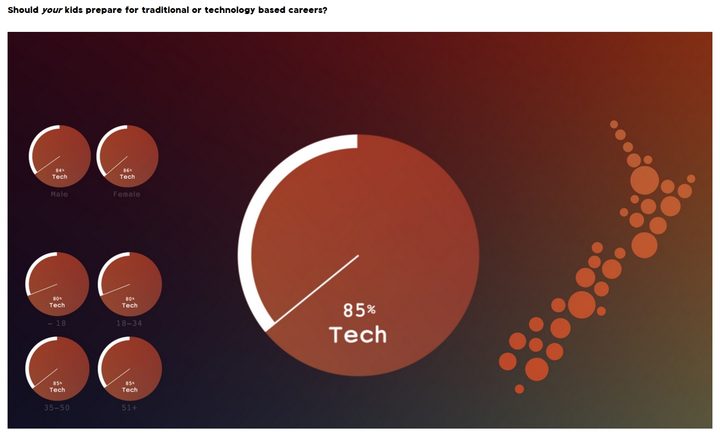 "Should your kids prepare for traditional or technology based careers?" Photo: screenshot

Given that both presenters and five futurists had been telling viewers the robots were coming for their jobs, it’s hardly surprising they'd respond like that.

To gauge the public appetite for bold changes, viewers were asked each night to sign up to Plan A (keep on doing what we do now) or Plan B (policies for radical change).

Usually viewers picked Plan B, but were they prompted by the people on the show saying over and over that radical changes were coming in the next 20 years whether we want them or not?

Prof Ian Watson from the University of Auckland was consulted by the programme’s makers on one of the recurring themes: technology wiping out traditional jobs.

He told Mediawatch the Plan A/Plan B method might indicate New Zealanders' appetite for change, but the strength of Plan B responses suggested they were coloured by the programme's persistent focus on the speed and pace of technological change.

He also had reservations about the contribution of the five futurists who featured heavily in the series.

"I thought most of their contributions were rather vague. There wasn't a lot of detail in what they said, though It was nice to see these ideas being discussed in the mainstream media ," Prof Watson told Mediawatch.

Stuff.co.nz's Steve Kilgallon said the futurists "spoke in a bizarre mixture of management speak and platitudes"

Veteran broadcaster Brian Edwards - a pioneer of live studio-based current affairs in New Zealand  - described the show as a ‘turkey’ on his blog after the first outing.

"Scrap the studio extravaganza and reduce the number of contributors, so that we get depth and development of ideas rather than headlines from each of them," he wrote.

On The Spinoff, editor Duncan Grieve hailed What Next as “something of a landmark” after just two episodes.

"This is arguably the most public-spirited piece of programming TVNZ has run since the scrapping of the charter, and the fact it was watched well enough to be near the top ten of recent weeks’ ratings – suggests it hit its intended audience," he said.

However, the five futurists were at times "glib" and over-earnest, he reckoned.

He could have added that they were all too agreeable. They scarcely ever disagreed, though they occasionally contradicted themselves.

On Tuesday, Maui Lab's Sacha McMeeking confidently claimed Kiwis would take mass job losses caused by coming waves of automation in their stride. But just minutes later she said poverty caused by economic reform in recent years had embedded inequalities and unfairness in our society that needed to be addressed urgently by the government.

What Next certainly got important issues like what we should we farm in future and how we should structure social welfare in front of TV viewers in prime time.

But in all the time spent discussing the Universal Basic Income, no-one ever addressed the question of how the level of it should be set before viewers were asked to vote on trying one out in New Zealand.

The hosts said 15 countries were trying it, but we didn’t hear how it worked there. And no-one mentioned that a UBI already exists here countrywide for people over 65: national superannuation.

On Thursday, a promised "road-map" for the future failed to materialise in the final episode.

Instead, there was talk about pathways, journeys, vague visions, challenges and opportunities. Much of it was meaningless.

Nothing much was said about consumption, productivity, public and private debt or what might happen in other countries which could affect us between now and 2037.

Getting serious issues aired on prime-time TV was the main achievement of What Next, but the opportunity to find out what people are prepared to support or sacrifice in the future was missed.

In one episode, Sacha McMeeking simultaneously puffed up and patronised the audience.

"We are people who punch about their weight and climb insanely huge mountains," she insisted.

Let's hope we can make a broadcasting system that can get to the point if it spends more than a million dollars to air important issues on a national channel.