No editor had a better night at last weekend’s Canon Media Awards than Miriyana Alexander. Her Weekend Herald won ‘Newspaper of the Year’ and she won a fellowship in the UK to study so-called ‘fake news’. Mediawatch asked her if that’s really a problem the media here need to worry about. 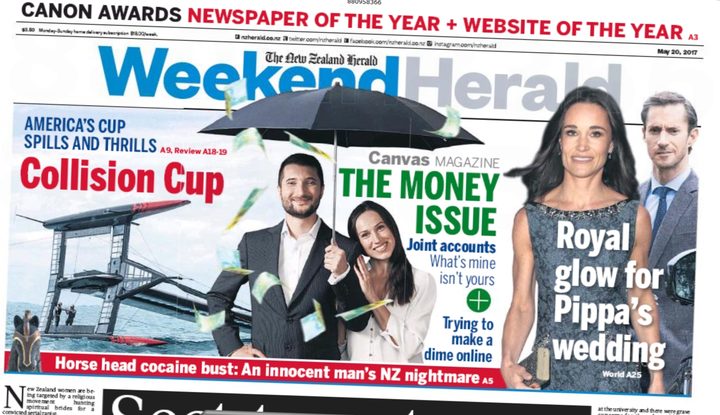 The Weekend Herald trumpets its newspaper of the year award on the front page. Photo: PHOTO / RNZ

Fake news and "alternative facts” have been hotly debated after recent elections in the UK and France. Revelations that Macedonian teenagers were getting rich putting false US political stories online sparked alarm when surveys showed many peopled believed the yarns popping up on their social media feeds during the election campaign there.

Miriyana Alexander says we must take the issue seriously here ahead of our election.

"People are now using that term "fake news" to describe a story they simply don't like. Trump is a master of that and Winston Peters has started doing it. I think it does muddy the waters," she told Mediawatch.

"Our lawyers have had to get in touch with Facebook several times because people have set up fake New Zealand Herald sites and attempted to rip off our masthead and circulate fake news under that," she says.

"They've done that and linked to real stories on the Herald site. When that happens we do have a real credibility problem," she says.

Who's doing that? And from where?

"Our lawyers are looking into that," she says.

"The onus is on us. Surveys say trust in journalism is supposedly decreasing and we - the journalists - are not trusted. That's ironic because at a time when fake news is spreading around the world, we are the organisations holding true to ethics and trying to do good journalism," she says.

The income from those ads - and from people paying the cover price of $3.50 - make it a good earner for publisher NZME.

It is a distinctive publication based on original and local journalism which people are prepared to pay for - even while the company gives away its news for free online.

So is the Weekend Herald a model for all papers struggling in the digital age?

"It is a huge issue that we pay for great journalism but we are giving it away," she says.

"We will look back in time and think: What were we doing, giving away this fantastic journalism for free? It's a flawed business model really. You can't go to the dairy and pay a couple of dollars for a can of Coke and then go to the supermarket and get it for free," she says.

But making readers pay for it is no simple matter in the digital era, she adds. 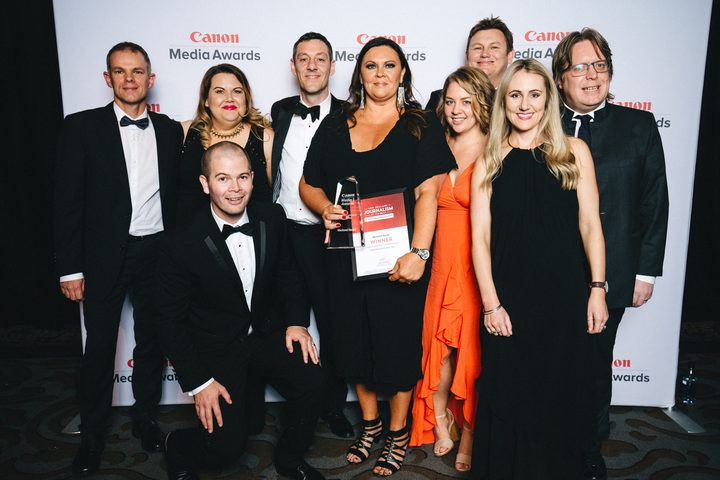 Miriyana Alexander with the newspaper of the year award flanked by other New Zealand Herald journalists at the Canon Media Awards. Photo: supplied

Take the Manchester bombing. There is so much news about that available online for free that it would be impossible to persuade people to pay for that.

"But unique content should be paid for. There's got to be a way that we can charge for some of that, especially sport   and lifestyle," she says.

"Citizens have to play their part in this too," she adds.

Like the Herald, the UK-based global operation The Guardian offers almost all its content online for free. But online readers of the site are constantly urged to support the journalism they're reading by making an online contribution.

"We and the Herald get criticised for some of the the things we do, but a place without journalism would be a sad place. People can support that by buying papers and paying for journalism," she says.

The Herald has an investigative journalism unit, which includes specialists in data visualisation. They also bagged prizes at the Canon Media Awards last weekend.

On Nine to Noon this week, former Herald editor Gavin Ellis praised the work of one of them.

Kirsty Johnston examined dozens of water extraction consent deals and showing how bottling companies paid a fraction of the costs ratepayers are charged for water supply.

While her story dominated on the Herald's front page, it had slipped off the Herald's homepage after a short time. Within hours this story of genuine public interest was hard to find on the site and mobile app at all, said Gavin Ellis.

"We have a top-class investigative unit at the Herald producing stories like that. We put it in the paper but online it disappears quickly because other news happens. People are looking for stuff that is fresh," she says.

She says the Herald has made a commitment to showcasing unique content and stories. NZME recently bought an online news production system developed by The Washington Post and has redesigned its website. Miriyana Alexander says this boosts the online presence of its best journalism.

Merger up in the air

The Herald's publisher NZME has an uncertain future after the Commerce Commission declined to authorise a merger with rival publisher Fairfax Media. Both companies filed a notice of appeal to the High Court this week in a bid to overturn the decision.

Last year, Miriyana Alexander put her name to a letter urging the Commerce Commission to give the merger a green light. She wasn't the only one: the editors of all major papers at both NZME and Fairfax Media signed it.

Why would editors back a proposal which would replace two teams of reporters covering business, sports, politics with just one?

"People didn't look past this decision to realise business could not carry on as usual. I think it is a sensible thing to do right now because there's no doubt there will be changes anyway".

She points to vulture funds circling Fairfax Media in Australia. A new offshore owner of the parent company is unlikely to care much about its New Zealand mastheads, even though they still turn a profit.