The Commerce Commission has declined a merger which would have created New Zealand’s biggest news media company. Mediawatch looks at the reasons behind the decision and what may happen next. 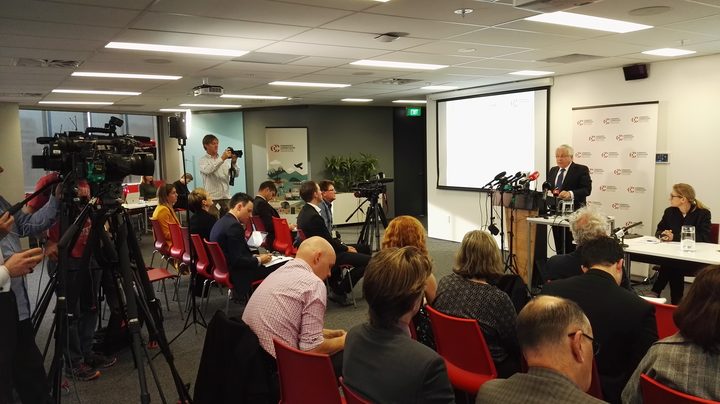 If Fairfax and NZME had been able to merge, their company would have dominated the markets for national and local newspapers, as well as the readership of New Zealand news online. It would also have owned half of the country's commercial radio stations.

The bosses of the two companies have painted a bleak picture of their future prospects alone.

“There is no status quo of the business that we have today,” NZME chief executive Michael Boggs told the Commerce Commission bluntly.

Greg Hywood, the chief executive of Fairfax in Australia, flew in and told the Commission it would be "end-game" without a merger.

In November, the Commerce Commission said it was inclined not to approve the merger because one single company would reduce competition in digital advertising and the quality, variety and diversity of our news.

A flurry of subsequent submissions from the merger partners and their consultants and lawyers did not move the Commission.

Today it said it also "disagreed with some of the scenarios they put forward about their respective futures without the merger." 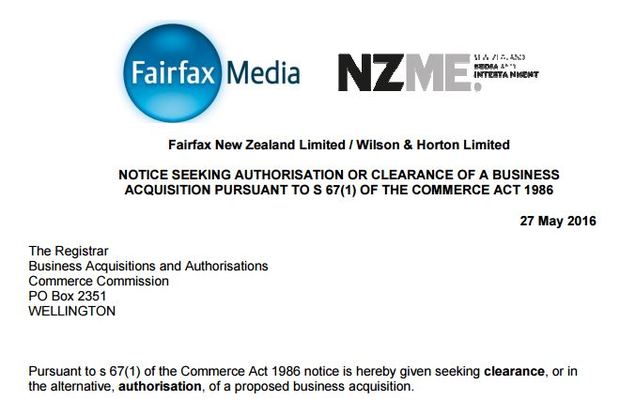 The news media giants' application putting their case for a merger. Photo: screenshot

Why they wanted to merge in the first place

NZME owns The New Zealand Herald and its website, along with other regional newspapers and radio stations, including Newstalk ZB, Radio Sport, ZM and Radio Hauraki.

Together the companies employ more than 800 journalists in New Zealand.

Fairfax and NZME's newspapers still provide the bulk of both companies’ income, but their merger application said newspapers’ ad revenue had slumped in the past 10 years. Many of Fairfax Media's daily papers are recording double-digit annual falls in circulation.

A merger would have allowed Fairfax Media and NZME - which are both still profitable - to cut costs and duplication. Time and again they said it would "extend the runway" and buy them time to develop a sustainable plan for the digital age.

NZME and Fairfax argued the income from digital advertising - ads on websites and social media feeds and apps - is now crucial to their businesses.

At a stroke, a merger would remove both companies main online news competitor: each other.

But a new and bigger company would still have faced falling revenue and increasing digital competition in the future. They are now competing for that with many other media businesses, and online giants Google and Facebook are getting the lion’s share.

What will happen next?

NZME and Fairfax could appeal the decision in the High Court.

Section 67 of the Commerce Act says the Commission can authorise a merger even if it is anti-competitive, if it would result "a benefit to the public". In its draft determination, the Commission said significant loss of "media plurality"outweighed any benefit of the merger may bring.

The merger partners argued the Act doesn't allow the Commission to account for "public detriments" at all, let alone unquantifiable ones.

"It should focus on economic efficiency considerations and disregard broader social policy goals that are not within the scope and purpose of the Commerce Act," they said.

But an appeal would be a costly, uncertain and time-consuming move.

News gathering resources - and possibly even some newspapers - are likely to be be slashed.

Fairfax Media's first statement promises “an even greater focus on cost efficiency ”and “reshaping how we deliver our journalism to local communities”.

Jobs - including those of journalists - will be lost in further rounds of cost-cutting, especially in the regions.

“We believe - no, we know - that the rapid dismantling of local newsrooms and journalism at scale in this country is inevitable if this merger does not proceed," Fairfax and NZME editors warned in an open letter to the Commerce Commission in November 2016.

"It's not going to be Auckland and Wellington and Christchurch that suffer, it's going to be Marlborough, Nelson, Timaru, Manawatu, Taranaki - the smaller places," Fairfax's chief editor Sinead Boucher told the Commission last month.

Fairfax Media cut The Marlborough Express to three days a week this month. It could be a sign of things to come for daily papers elsewhere.

NZME has already sold off all its newspapers south of Whanganui. Its five remaining regional papers could end up being sold or closed.

Outside investors - including overseas funds - may make offers for a stake in NZME, which is listed on the NZX. Fairfax Media's parent company in Australia (also reportedly the target of a takeover there) will have to decide whether to retain the New Zealand wing of the business.

Fairfax and NZME may now seek to merge with other media or technology companies with more complementary holdings. The telcos Spark and Vodafone may be looking for content partners to increase their clout in the media marketplace. TV3's owner MediaWorks and even state-owned TVNZ may have similar interests in hooking up.

Fairfax and NZME were once excluded from public funding earmarked for broadcasting, but they can now receive limited New Zealand on Air funds for digital journalism. Expect both companies to pitch for a bigger slice of taxpayer money for multimedia journalism.

Media companies here may also deepen existing relationships that serve their mutual interests, such as the KPEX advertising joint-venture which unites TVNZ, MediaWorks, NZME and Fairfax Media. They are already sharing content to an unprecedented extent.

When the merger proposal first emerged a year ago, a comprehensive 120-page proposal emerged soon after. Clearly the leaders of both rival companies had been talking closely for some time. Do they have a Plan B which means both can survive in the future?

While this mega-merger is off the table at the moment, the era of "co-opetition" among corporate "frenemies" is well under way.