Winston Peters aims a low blow at The Herald

Winston Peters accused The New Zealand Herald of peddling "alternative facts" on immigration and questioned the ethics of two of its "immigrant journalists" this week. Did he have a leg to stand on? 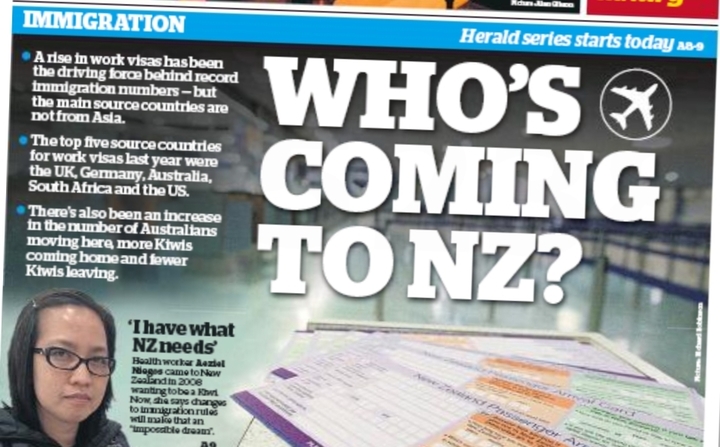 "Who's coming to NZ?" asked the Herald's front page on Wednesday, kicking off a series of stories sparked by the latest official figures showing immigration had hit another record high.

"A rise in work visas has been the driving force behind record immigration numbers," said The Herald, "but the main source countries are not from Asia.”

New Zealand First's leader Winston Peters thought the story was wrong, but rather than write to the paper to point this out he put out a press statement accusing the Herald of peddling "alternative facts".

“New Zealand Herald propaganda written by two Asian immigrant reporters . . . is completely wrong and based on flawed data,” he said in the the statement

Winston Peters said data from Statistics NZ based on arrivals to the country was misleading. Figures from the Ministry of Business Innovation and Employment show the main source countries for work visas are in Asia, he said.

He claimed The Herald's story didn't take into account that many overseas arrivals change their visas while in New Zealand - including those who come on student visas - and end up as long-term migrants.

He's not the only one to say this week the new figures don't give a full picture.

"Statistics NZ’s data is largely based on ‘'stated intention’' by migrants as they arrive," said Fairfax's Vernon Small in an article in The Press about the politics of immigration.

"According to the number-crunchers, the vast majority of work visas is approved onshore, so they do not necessarily show up in the information collected at the border. And once someone is here, there can also be changes in how long they stay and in the types of visas they move on to," he wrote.

The two journalists Winston Peters singled out are Lincoln Tan, who has been with the Herald for many years, and Harkanwal Singh, the leading data journalist at The Herald who specialises in interpreting and illustrating complex information for news stories.

In The Herald on Thursday - under a "Winston is wrong" headline - the pair pointed out they had used the same data politicians have been quoting for months about migration.

Plans to cut immigration by tens of thousands - as Labour's leader is suggesting - and to raise the quality of incoming workers - as the government wants to do - have all been based on the permanent and long-term migration data from Statistics NZ, they said

Their report slated by Winston Peters also acknowledged China and India are among the biggest source countries for permanent residents.

Singh and Tan also insisted they had not ignored students from India and China transitioning to new visas in their report. There are graphs in the online data visualisation showing the key patterns.

So, to the Winston Peters saying we didn't mention student to work visas. Here's the second chart in the vis.

Record numbers of people are coming to New Zealand intending to stay, including returning Kiwis who are already citizens. Many arrivals are from Asia; on short or long term visas but not all will become long term residents of permanent migrants.

There’s nothing new about any of that.

What is new is a rise in the number of long-term direct migrants from other places for a variety of reasons, possibly even Brexit and Trump.

Winston Peters can cite different data and come to a different conclusion about what the Herald called “the driving force behind record immigration numbers”.

But this week he went after the reporters - and not the facts.

He singled out two senior Herald journalists for their ethnicity and accused them of being biased as well as bad, with no basis.

"You've got two immigrant reporters  . . . who seek justify their existence and that of mass immigration coming mainly from Asia coming into the country," Winston Peters said on RNZ's Morning Report last Thursday, while at the same time rejecting claims the attack was racist.

"The specific data set and visualisation used are not the only possible ones, and reasoned criticism of the data and analyses is entirely legitimate," said Auckland University statistics professor Thomas Lumley.

But "Winston Peters claimed that the Herald story was “fake news” and attributed the conclusions to the reporters being Asian immigrants themselves. The first claim is factually incorrect; the second  - in the absence of convincing evidence- is outrageous," he said.

The Herald’s editor Murray Kirkness (an Australian immigrant) hit back in the paper on Thursday accusing Winston Peters of Trump-type tactics.

He urged Winston Peters to get a grip on the complexity of this election year issue.

And that's the very thing the journalists he attacked  - based on their ethnic origins - were actually doing for readers of The Herald who may cast a vote later this year.

In his piece penned before Winston Peters' intervention - under the headline - Migration debate triggers a logic bypass, Fairfax's Vernon Small wrote this about the political debate about the latest record numbers:

"The familiar political crimes are in play – keeping it vague or, as the old saying goes, using statistics much as a drunk uses a lamppost; for support rather than illumination".

It wasn't long before he had a shining example of just that.