One boy grabbed the media’s attention by confronting peaceful protesters at an Anzac Day service in Wellington. But Bill English made no headlines when he gave voice to a prominent pacifist from the past at a ceremony in the capital soon after. 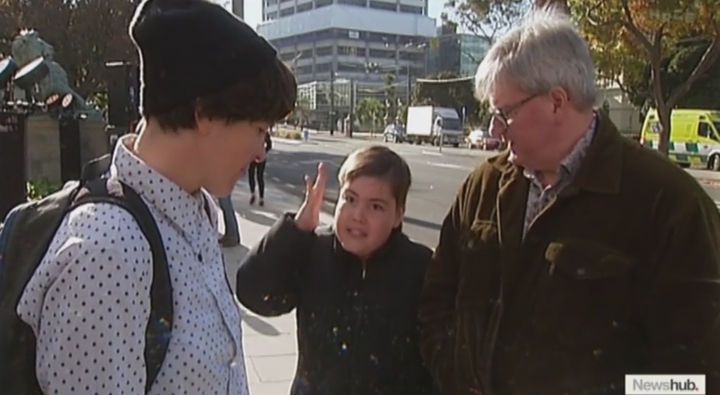 On Anzac Day, members of Peace Action Wellington laid a wreath in what Newshub described as "a simple silent protest" about civilian deaths in Afghanistan.

But few people around the country would have known about it if a 12 year old had not confronted them during a  Newshub interview.

Jason Broome-Isa did not hold back, accusing the protesters of milking the media presence:

"You're not here to remember the dead. You're here to say: 'It's free publicity and let's make the most if it,'" he told them.

The media certainly made the most of what Jason had to say.

Newshub posted raw footage of the entire encounter online under the heading: 'Give me strength': Anzac protest boy's full barrage. Newshub later reported that screened across the ditch on Sky News.

RSA president Barry Clark praised Jason on Newshub’s AM show and he also claimed the protesters were only after media attention. 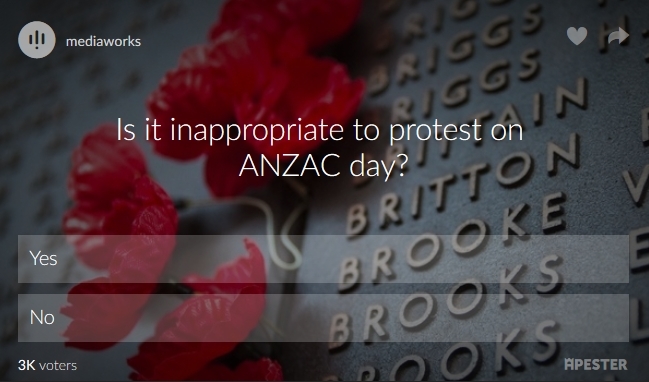 The online poll on TV3's AM show sparked by the confrontation at Wellington's cenotaph. Photo: screenshot / MediaWorks

TVNZ, by contrast, ignored the story altogether, probably because it had been captured exclusively by the cameras of its rival.

RNZ's Checkpoint reported that the protesters said he had already confronted them before the Newshub camera was rolling and his son Jason got involved.

"What we're remembering on Anzac Day is people who gave their lives for freedom and part of that freedom is the ability to protest.

"As long as people are acting within the law, they're allowed to express a point of view," Mr English said.

Burton became a resolute christian pacifist who was jailed for his beliefs.

The day after the Second World War was declared, Burton condemned it before a crowd outside Parliament - a stone's throw from the cenotaph where Wellington Peace Action made their point peacefully on Anzac Day.

While RNZ played excerpts of Mr English reading the poem, Newshub was the only media outlet to link Burton's work with his pacifism.

When questioned over choosing a poem often used for pacifist demonstration, Bill English said he "hadn't looked into the history of it" but thought it was important "people understand the realities of war".

And in that, Mr English actually echoed the protesters in Wellington earlier in the day whose presence had wound up Mr Broome and his son so much when the Newshub camera was rolling.