John Clarke lampooned politicians and the powerful in New Zealand and Australia, but he also skewered the media from time to time with his subtle style of satire. Mediawatch looks at that - and how the media here marked his death. 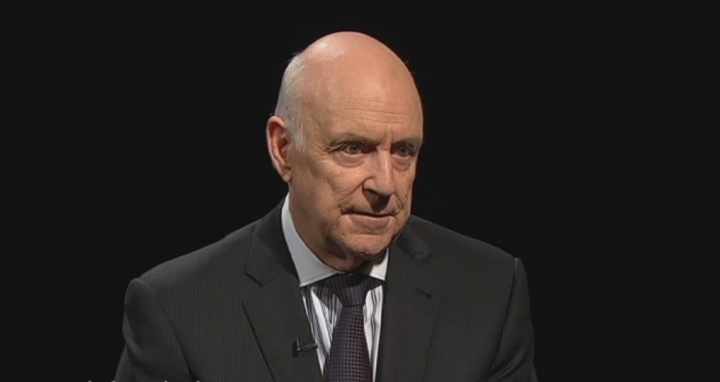 For people of certain age, John Clarke was part of the national furniture even though he left home forty years ago for Australia - and became a household name there.

His death dominated of the news website of Australia's ABC, pushing the latest US Russia tensions over Syria and a state of emergency in Egypt down the homepage.

In 2012, he presented a documentary series which dissected - and criticised - Australians' obsession with sport. Few 'foreigners' would have been able to get away with that. 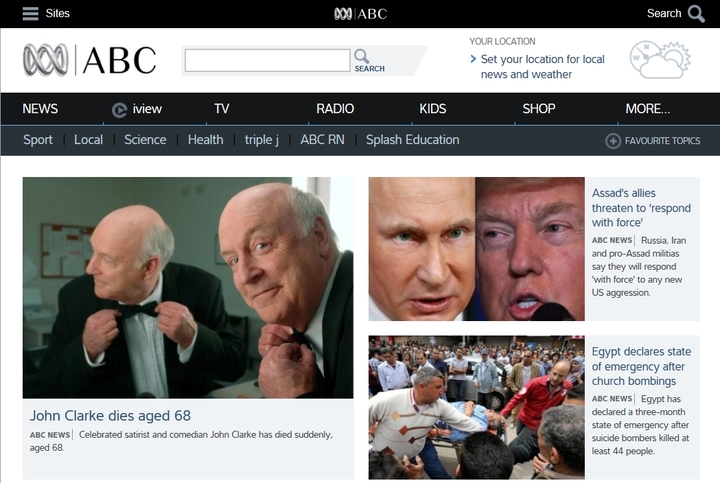 John Clark's death puts Putin and Trump in the shade in the website of ABC News. Photo: screenshot

While John Carke has been remembered in both countries as a comedian and a satirist who lampooned politicians and other people in public life, he also poked the borax at the media.

In one of his weekly satirical news interviews for ABC television after the election of Donald Trump last year 2016 - with sidekick Brian Dawe - he skewered the news coverage posing as news director Howie Diddit.

Just last month, he was sending up the disposability of online news and the scourge of so-called “fake news” - as online news director Xavier Breth:

Back in the late 1990’s, John Clarke had a poke at journalism in the Sydney Olympics mockumentary series The Games, which he co-wrote and starred in.

"Look, Jack, if you want to drop a fact into one of your scintillating articles at any point, you know where we are," said John Clarke's character, before hiring a Bob Hawke impersonator to fool him with some fake news and destroy his credibility.

"Here’s to Australian journalism," he crows, raising a glass of champagne in the final scene.

Lots of clips of old Fred Dagg stuff were embedded in online news stories here in the days after his death, and programme after programme played snippets of the gumboots song this past week.

The Listener and North and South hauled old John Clarke gems out of the archive and onto Bauer media's site noted.co.nz.

When Footrot Flats creator Murray Ball died recently, TV3 screened the movie from 1986 for which John Clarke coincidentally supplied the voice of Wal Footrot. But the tributes to John Clarke have - so far at least - been thin on the ground from the medium that made his name. 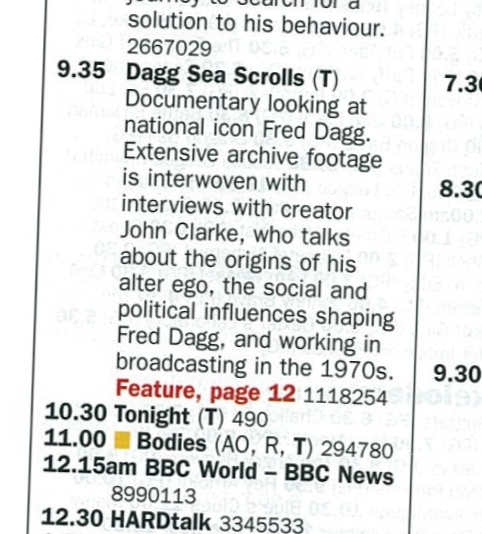 This doco screened in 2006 would have made a great tribute this week. Photo: PHOTO / RNZ

Last Wednesday at 7:30, TVNZ 1 screened the classic Country Calendar episode from 1974, the NZ On Screen website put some videos up on its homepage . . . but that was it.

Back in 2006, TV One screened the hour-long Dagg Sea Scrolls with lots of archival Dagg gags as well as John Clarke himself talking about life in New Zealand at the time his alter ego became so well known and well loved.

That would have made a better tribute to those wanting to remember the man and not just his comic creation from forty years ago.

Three years earlier, Kim Hill flew to Melbourne for a Face To Face interview which would have done the trick too.

Breaking it to us not so gently

The startling news that John Clarke had died had the media reaching for the red BREAKING NEWS banners for their websites last Monday.

They bore the bare fact of his death and promised “more soon,” though many people seeing the bad news that way probably didn't want to know more about what his friend Tom Scott called “a terrible surprise” on RNZ National shortly after the news broke.

Newstalk ZB’s site flashed up a portrait of him as Fred Dagg from the 70’s and called him iconic. So did The New Zealand Herald website, which also juxtaposed a Fred Dagg picture with a more recent one of John Clarke looking like an elder statesman of satire in the suit and tie he wore on his weekly Clarke and Dawe routines on ABC TV.

"Watch the late John Clarke as iconic character Fred Dagg,” said TVNZ's One News Now site, imploring browsers to click on a morselised TV clip from the 1970s lasting less than a minute.

“Younger people may say: 'Who?' at the news of John Clarke’s death, but Dagg dominated New Zealand during a time of relative isolation from the wider world,” the site claimed.

Dagg "dominating the nation" may sound like a stretch but he certainly did have an impact on television.

"At the time this was happening, there was one channel in black and white. Apart from people reading the news in a dinner suit, there were hardly any New Zealanders on it," said John Clarke in The Dagg Sea Scrolls.

John Clarke himself wasn’t shy about laying out his views of the medium which made him a household name.

In 2008 he told North and South magazine's Matt Philp:

“Television is regarded by those who control it as being an industry run by a small group of geniuses for a large group of dumb people, when the opposite is manifestly true. It is possibly going to be a medium that goes out of existence before it gets really useful, which is a bit of a shame -- and a serious indictment on management.”

As it’s turned out, television has outlived John Clarke, though no-one who works in it and knows him is happy about that.