Blenheim-based newspaper Marlborough Express will soon publish on only three days a week, after more than 130 years as a daily paper. Is this a sign of things to come for other local papers with a small circulation and falling sales?

Fairfax Media has announced the Marlborough Express will be published on Monday, Wednesday and Friday from May.

The company said it would introduce a new “e-newsletter” next month - called the Marlborough Express Daily - each weekday, while the company’s existing free weekly community newspapers Marlborough Midweek and the Saturday Express would continue.

Fairfax Media said news from the region would continue to be available on the news website stuff.co.nz and social media site Neighbourly, which was part-owned by Fairfax Media.

New sections offering “relaxed lifestyle reading”, guides to local events and culture, local history and heritage, and analysis of local issues were to be added to the three weekday editions of the paper.

The change was first flagged last year when the paper launched a project called 'Express of the Future'.

The staff, local businesses, advertisers and readers were asked for their input. Fairfax said new local content features were based on their feedback.

"At some point in the future, we will not be able to sustain a daily newspaper. The time has come to change," she warned.

The most recent circulation figures show the Marlborough Express now sold about 5600 copies each day. The figure was down almost 10 percent on sales in 2015.

The Marlborough Express urged readers to get in touch with ideas last year. Photo: screenshot

Ms Boucher said in a statement today the challenges the Marlborough Express faced were not unique to the region or New Zealand.

“The reality is we can’t continue with a daily newspaper in Marlborough for much longer, but we have been an integral part of the community for 150 years and we want to stay that way,” she said.

“We hope it will prove to be a more sustainable model for our local journalism in Marlborough. By shifting the Marlborough Express to a morning publication and reducing the number of days we print we will be making significant savings in distribution and production,” Ms Boucher said. 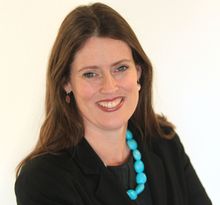 Joanna Norris, Fairfax’s senior South Island editor - who was also editor of Christchurch's daily The Press - was in charge of the project, but she told Mediawatch last year it should not be considered as a template for other regional and local papers.

"But there will be things we learn from this that could be applied elsewhere. We need to have a sustainable business model to publish journalism around New Zealand," she added.

Other local Fairfax papers with a circulation of less than 25,000 - including the Timaru Herald, Nelson Mail and Southland Times - recorded falls of between 3 and 16 percent last year.

By contrast, the Allied Press-owned Otago Daily Times, which is introducing a paywall for online readers soon, has recorded more modest falls in its circulation in recent years.