Bill English hinted at changes to superannuation last weekend when he told reporters to "wait and see." His plan to bump up the retirement age was done by dinnertime on Monday, taking much of the media by surprise. 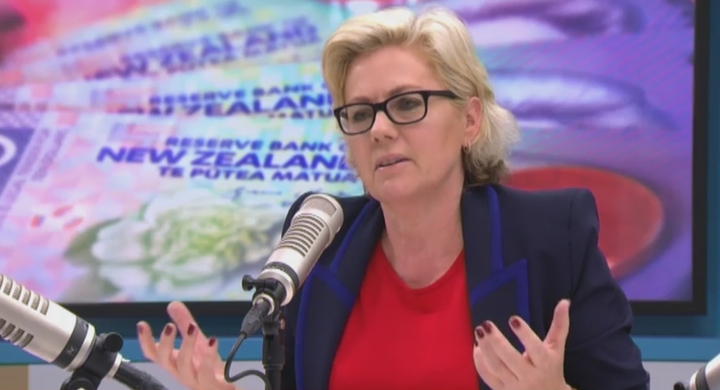 "This needs leadership. Somebody's gotta have some balls to put this thing on the table," retirement commissioner Diane Maxwell said on TV3's AM show last Monday.

"Someone's gonads need to go on the line, host Duncan Garner said, warming to the theme.

Back in January, on RNZ's Outspoken debate on the future of work, Ms Maxwell had warned those in charge "have to put their big pants on".

Now we know why.

The received wisdom from political pundits and journalists was that tinkering with retirement entitlement was electoral suicide - no matter how acute our ageing population may make the problem.

Not for nothing had John 'finger on the pulse' Key declared change would come over his dead political body, said the pundits. Labour dumped the policy after defeat in 2014 because it was too toxic, they all agreed.

On Radio Live, Mark Sainsbury ruefully reckoned politics has ruined any chance of a decent superannuation debate before one had even begun.

In the New Zealand Herald, political reporter Claire Trevett put it like this the morning before Bill English's announcement:

"Memo to Prime Minister Bill English: When your campaign platform is one of certainty and stability, it doesn't pay to torpedo it yourself by hurling in a great dollop of uncertainty."

When the PM didn't get her memo and announced the change anyway, she responded with another piece pointing out this was like feeding kryptonite to Winston Peters and strengthening his hand.

Soon after, the piece was amended online like so:

"English's announcement was akin to feeding Popeye his spinach."

Putting it on the table 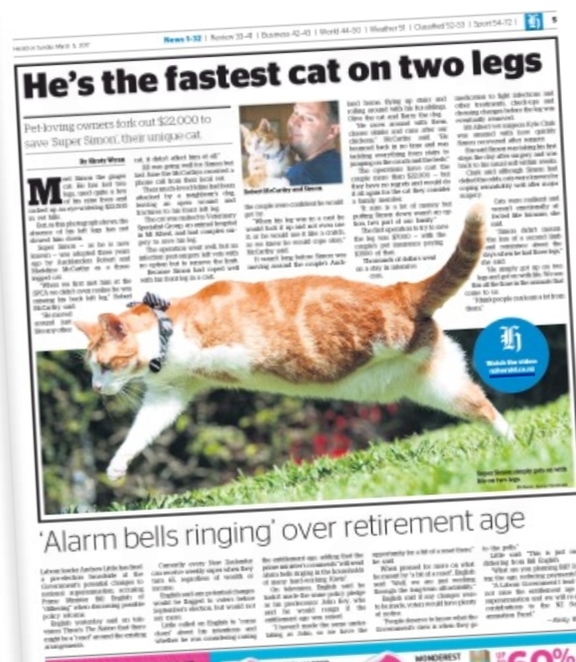 The issue first cropped up just before 10 am on Saturday morning in the year's first edition of TV3's publicly-funded politics show The Nation.

Near the end of a long interview about the election year ahead, host Lisa Owen asked the PM if superannuation was set in stone, and he raised the prospect of a "reset".

"Tell me more," she pleaded, several times in several ways.

"Wait and see," he replied, several times in the same way.

One week later, claims an inter-generational war has kicked off echo throughout the media. This weekend's papers carry anguished accounts of The Boomers vs Generation X, Y Z and the Millennials.

Were the media ready to respond like coiled springs to the sudden emergence of an apparently election-deciding issue last weekend?

On TV3, Newshub at 6 opened that night with the shock news that Super was in play, but TVNZ1 News had nothing about it at all that hour.

It led instead with news that a transgender weightlifter had been cleared to take part in a women's competition.

The only PM in its bulletin was Australia's Malcolm Turnbull, under fire for not showing up at Sydney's mardi gras. Mr English's hint of Super reform was in RNZ's news at 11 am. It topped the RNZ bulletin at noon and stayed in the top spot right though until Monday.

It didn't make Newstalk ZB's bulletins on Saturday, though at 3 pm it carried the Conservative Party leader's concerned reaction to the news about Laurel Hubbard.

The following day's Sunday Star Times had a story at the foot of page 6 with reaction from opposition leaders below one about Richie McCaw leaving some stuff behind a house he had sold. The Herald on Sunday reported "alarm bells ringing" about Super on page 7 . . . under a much bigger yarn about a two legged cat. 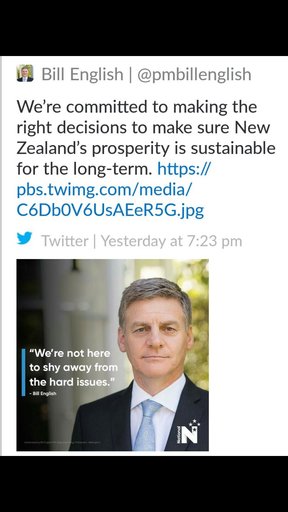 After The Nation replay on Sunday morning, there was nothing again on TVNZ 1 News that evening, which led instead on the scourge of pornography.

The PM's Super "reset" hint could have made for a blockbuster edition of TVNZ's weekly New Zealand on Air-funded show Q+A, but that doesn't start up again until next week. The political year is now well under way. Surely our tax dollars should be at work by now?

Mr English and his people were clearly thinking about how to present the potentially unpalatable news he was preparing to announce - unbeknown to the media - when preparing for his regular round of Monday morning news media interviews.

A tweet appeared on the PM's feed on Sunday night with a statesmanlike picture and the message: "We're not here to shy away from the hard issues".

Right-wing pundit and lobbyist Matthew Hooton tweeted back, urging the PM to sack whoever writes his tweets. The tweet duly vanished on Sunday night, and the PM admitted on both TV3 and TVNZ the next morning he himself had no hand in its creation or deletion.

He was, he explained, "between phones" and not entirely across his Twitter.

The Herald's Claire Trevett pointed out that the tweet was ironic as the PM spent Monday morning "trying to shy away from the hard issues on his regular media slots".

"Wait and see," he said over and over, even when reporters asked: "How long?"

But that question was answered decisively after 4pm on Monday at his press conference, after which he was back on his social media game.

He - or his people - tweeted a statesmanlike video explaining why upping the retirement age in 2040 was  the right thing to do.

But Mr English wasn't the only one rapidly resorting to cyberspace. Within an hour of the announcement, Matthew Hooton made the following request at fyi.org.nz, which helps users make requests for official information. 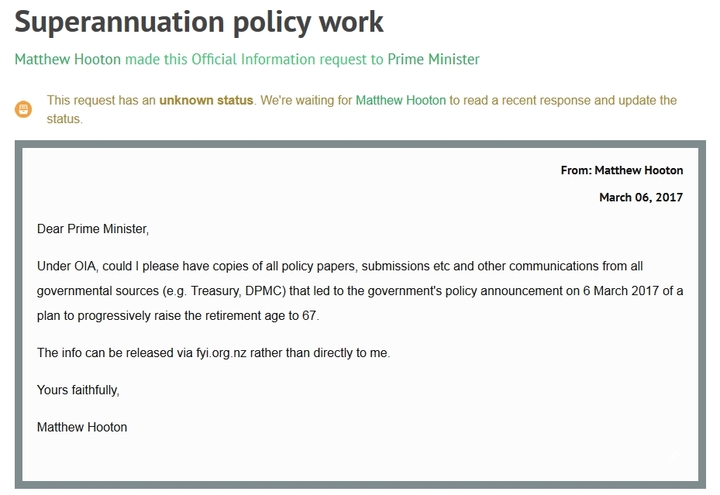 Similar requests from political reporters can't have been far behind, especially as some reckon Bill English botched the unveiling of his policy and had to be pushed into announcing it early.

Former PM John Key once admitted he and his ministers sometimes held up the release of awkward information if it helped them handle the issue politically.

It will be interesting to how long the media have to "wait and see" before this information is forthcoming - now that we're under new management.