TVNZ's new prime-time programme about money is bankrolled by a big bank and it has a host who helps out the broadcaster with its marketing. So is it all one big ad - or a just another new way to fund a factual show?

Mind Over Money kicked off on TVNZ 1 last Monday in a prime slot straight after top-rating Fair Go.

It's fronted by Nigel Latta, a psychologist who's become TVNZ‘s go-to guy for TV shows about big issues including crime, immigration, parenting, and inequality.

For TVNZ, Nigel Latta was a natural choice for this current series all about how we manage - and mismanage - our money.

"A good outcome would be for people to have a conversation about money . . . and maybe to go and get a plan and get some advice from someone," said Nigel Latta in TV Guide.

Kiwibank is clearly hoping to be that “someone”.

The series was Kiwibank's idea and it bankrolled the entire production. It's the first time TVNZ has made a series to order for a commercial client picking up the entire bill.

“The team at Kiwibank have been hugely supportive. They trusted us to do our thing and were just generally amazing. And I'm not just saying that because they paid for the show, I'm saying it because it's really true. Nice one Kiwibank.”

But TV shows are expensive, so what's in it for Kiwibank?

That answer would be one of the things Kiwibank wants from the arrangement - an impression in the minds of potential customers that Kiwibank cares more about them and their money than other banks.

Not only is TVNZ making an entire series for a commercial client for the first time, it's using a presenter who also helps with its own marketing. 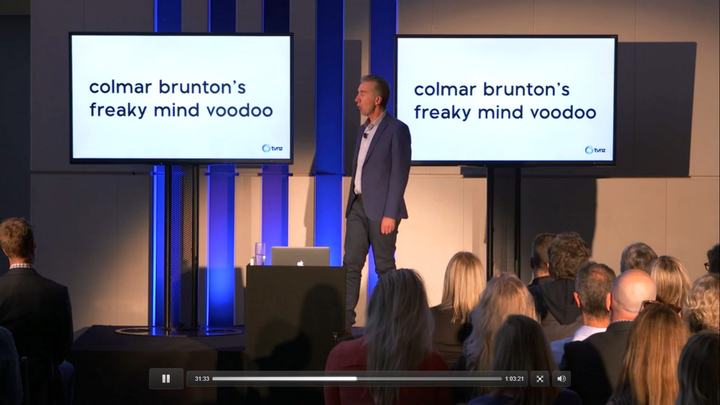 He said the research revealed compellingly-told stories on TV make consumers think better of a brand - and can change people' minds.

One of the slides summarising Nigel Latta’s talk that day - which can be seen in full on the 'sales' section of TVNZ's website - says this: 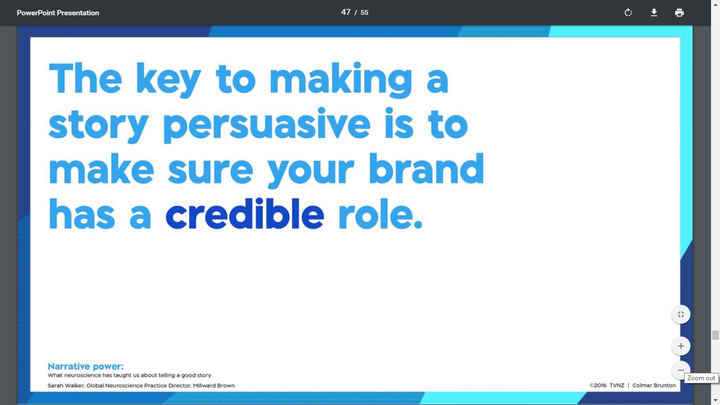 One of the key messages Nigel Latta gave to a TVNZ Sales audience. Photo: screenshot

While Mind over Money episodes are book-ended with messages making it clear Kiwibank is involved, the shows don't directly promote Kiwibank’s products and services.

But does the fact it only exists to promote Kiwibank's brand compromise the content? 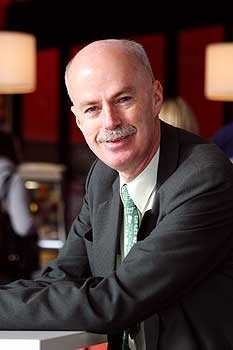 "I don't think it does," said Prof. David Tripe, an expert in banking at Massey University's school of economics.

"I was expecting lots of marketing buried in it. The programme was relatively clear of commercial messaging. This was about people's behaviour," he said.

"Parts of the programme about improving financial behaviour offer some guidance. That can be a good way of helping people remedy their situation," he said.

But he noted the ads and the website promoted in the programme's breaks were "significant marketing elements".

"That certainly does become a recruitment tool and that's why Kiwibank has splashed out to do this," he said.

No bank would ever pay for a programme which delved deep into banks, their profit margins and the role they play in our economic life, he said

"I'm unconvinced that Kiwibank's behaviour differs from that of any other banks," said Prof. Tripe.

A article about Kiwibank's role in Mind over Money appears in business magazine Idealog. The article itself is also a piece of Kiwibank-sponsored content. Kiwibank also recently sponsored articles and videos about the economy on the news, culture and comment website The Spinoff.

Their survival may depend upon reinventing relationships with customers, he said.

If so, should we steel ourselves for more 'messaging' in the media from the banks which - like Mind over Money - go far beyond traditional advertising?

"They need to be attuned to what's happening in the market around them," says Prof. Tripe. "I'm not sure they're very sophisticated at that yet."