The local voice Kaikoura has missed

After 18 years on air, Kaikoura's only radio station shut down recently. Its founder tells Mediawatch Blue FM could have been a godsend for people desperate for news they could use after the quake. 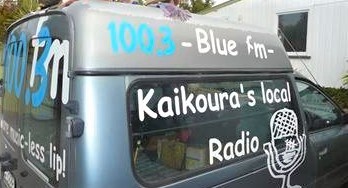 Kevin Heays was having a hot pie when Mediawatch called at 8:45am. As a regional councilor and former mayor up to his neck in post-quake relief work, who would begrudge him a breakfast of champions during a rare break?

"I would be up in the studio with a bottle of water and a cold pie if it was still going," he said.

He was talking about the modest HQ of Blue FM, the local station he founded 18 years ago but which was closed in September when the frequency was sold to a Blenheim-based music station playing only recorded music.

It began life as a low-power FM station, but ended up broadcasting from Clarence to the Hundalees on the 100.3 FM frequency.

For a while it was run from a pub he leased. Foreign backpackers having a beer were encouraged to get on air and even play their own music.

"If you can hear it, you can be on it. That was the mission," he told Mediawatch. "We had more fun than a bunch of ferrets down a hole".

Unfortunately, no-one in the town can hear it now - just when it could be most valuable.

Mr Heays said he set up the station with civil defence in mind. It had a generator and a mobile van with a loudspeaker that used to take to the streets broadcasting the signal.

"It was mainly a publicity stunt, but it could link into PA systems anywhere. I could broadcast into it and out of it," he said.

In Christchurch in 2011, little local low-power FM stations which survived the shake broadcast crucial local information when other communications were knocked out.

Volcano Radio in Lyttelton, for example, became a de facto community centre as most of the main street was destroyed, including the cafes where people usually met.

Mr Heays said Blue FM would be doing the same now if it was still up and running.

"We've done this before when we were cut off by flooding. people who have lost a dog wouldn't get on the national news or the EQC centre but it's important to local people," he said.

The provision of local radio should be included in official reviews of the civil defence response to this week's quakes, he said.

"Taihape, Te Awamutu - places like that - should all have a local station as part of the civil defence outfit. That could be a lifesaver."