Mock shock over horrid Henry in the Herald

Paul Henry's interview with the New Zealand Herald last week revealed him as a sweary, politically-incorrect entertainer with a huge ego who turns his nose up at the great unwashed. But we already knew that. The response actually revealed more about the news media. 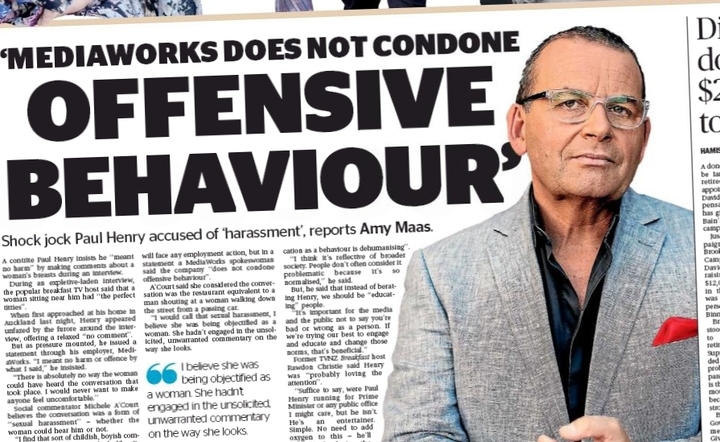 Paul Henry's sweary and crude interview in a rival paper dominated the Sunday Star Times - even though he mostly said the sort of stuff he's said several times before. Photo: PHOTO / RNZ

'Potty Mouth Paul: Has he gone too far?'

That was the teasing headline on the front-page banner of the NZ Herald last weekend. Alongside was a picture of Paul Henry, who has a long history now of saying provocative things on the record.

However, there was nothing in the paper’s news pages about Paul Henry “going too far.” The potty-mouthed pronouncements were tucked away in the Weekend Herald’s glossy supplement 'Canvas', where the editor’s column told reader: “Over the course of several glasses of pinot, Paul Henry spouted forth on his dislike of the masses, how he feels trapped in his job and his views on women’s breasts. Read it – and judge for yourself.”

The Paul Henry article was by Herald writer Greg Bruce, and it summed up a three-hour encounter with the broadcaster. The intro warned Paul Henry’s behaviour was “on whole new level” and “content may offend”.

There were lots of astericised F and C words in the quotes. And Paul Henry used the word “titties” 11 times during an account of a conversation he had with a Mediaworks publicist – after he’d had a good look at a woman who happened to be sitting nearby in an Auckland restaurant after the main interview had taken place.

Why would Henry give a candid interview last week to paper he doesn’t like and doesn’t trust?

For publicity. His employers at Mediaworks know the print media will harvest the online clicks from his controversial comments – even though he's only saying stuff he’s said before.