Gerry Brownlee made headlines and even offered to quit after bypassing airport security back in 2014, but the release of previously-withheld information contradicting his version of events didn’t interest much of the media two years later. 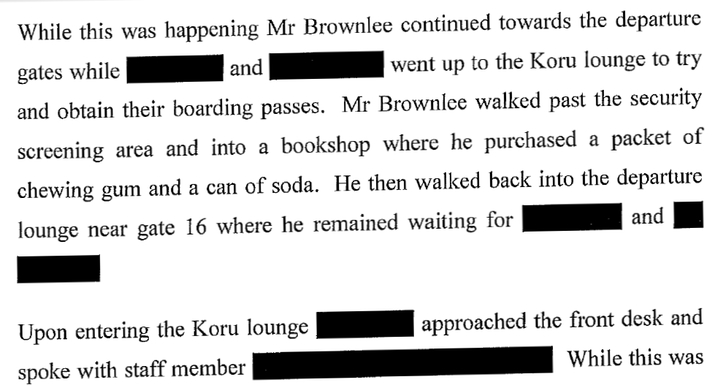 Details from the official investigation which took two years to see the light of day. Photo: screenshot

Gerry Brownlee was the minister responsible for civil aviation when he took a short cut through security at Christchurch Airport in 2014, telling staff he was in a hurry.

He later accepted responsibility for “a brain explosion”, was fined $2000 and even offered the PM his resignation.

But while all that made plenty of headlines at the time, the full story was only revealed last week.

Some of the findings of the official investigation finally came to light after the Ombudsman ruled they must be made public. Newstalk ZB’s political reporter Felix Marwick and the Otago Daily Times' Elspeth McLean had pursued the matter.

The previously withheld details (PDF) showed permission wasn't given to Mr Brownlee and two colleagues to take a shortcut and Mr Brownlee used the spare time to buy gum and a can of drink from the airport shop before getting a boarding pass.

The report also revealed Mr Brownlee could have been charged under both the Civil Aviation Act and the Crimes Act and could have faced a jail term.

"This shows a man ready to make up a story to excuse his bad behaviour and to risk the jobs of others to save his own," former cabinet minister Rodney Hide said in his Herald on Sunday column last weekend - which had the headline: "A dishonourable mention".

But journalists seemed less interested in what he called: 'Gate-gate".

The Press ran a story on page three which highlighted the investigator’s finding that the minister had "plenty of time" to go through security properly and still catch the plane. The Otago Daily Times ran a detailed story from Elspeth McLean, but with the low-key headline: “Light cast on Brownlee’s airport incident.”

The New Zealand Herald picked up that story and ran it online, rather than write one of its its own and on the ODT's YouTube channel ODT TV, Dunedin broadcasters Lisa Scott and Dominic George reckoned this was nothing Kiwis would care much about:

Other politicians accused of conduct unbecoming who have had their versions of events contradicted have been the subject of questioning for days, and persistent demand for apologies.

MP Aaron “Don’t you know who I am” Gilmore lost his seat in Parliament after press pressure in 2013. Further back, David Benson Pope was grilled for weeks about his use of a tennis ball years before he was a minister - and there was Helen Clark and 'Paintergate'.

The full facts of an incident that could have seen a prominent cabinet minister prosecuted or resign in disgrace would have never come to light without a journalist pursuing the release of withheld information for two years.

Perhaps the media have lost the appetite for the kind of political 'gotcha' stories they used to love.