The takeaway from a low-fact flying fast food yarn

Was it really news that a pizza was dropped onto a picnic blanket by a drone in a field recently? Is an age of food-by-air for the needy and greedy really upon us? Mediawatch looks for the takeaway in the media’s appetite for low-fact fast food yarns. 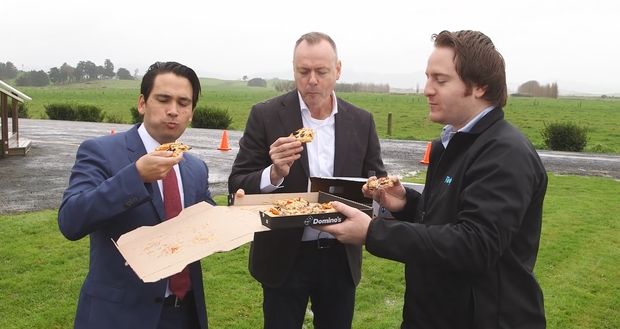 When the transport minister, a rep from a US drone-maker and a Domino's boss shared a pizza near Auckland, they got the kind of publicity money can't buy.

"New Zealand led the world when it gave women the vote and introduced inflation targeting," the Independent in the UK said.

TV3's Story show claimed airborne pizza would soon be "just a tap of a smartphone away". Domino's Scott Bush said they would have hundreds of drones in the air in the near future and Minister of Transport Simon Bridges told TV3: "We will see traffic in the skies."

Pizza drones are go! Domino's gets NZ drone delivery OK," gushed the New Zealand Herald in a story that said drone delivery would start later this year. The story posted Domino's own video of the photo opportunity, its FAQ document and there were quotes from the press releases supplied by Domino's and the minister.

In fact, Domino's has already dropped off pizza in London using a drone, and in Greece as well - though their transport minister wasn’t there to eat it.

As seen on TV

But lacking the PR muscle of Domino's, Mr Drummond's story didn’t get out of Gisborne this week, leaving him as perhaps the Richard Pearse of drone delivered takeaways.

Dave Dunlop's drone drops a coffee on a picnic table for TV3 a year ago. Photo: screenshot

Last year, Mr Drummond's coffee service was foiled by rules restricting his deliveries to open areas within his line of sight. Do the new rules trumpeted by the minister that came into effect in August allow for hordes of drones buzzing through our streets with cargoes of junk food?

No. They allow for commercial flying in rural areas, but not in areas where or pizza shops and customers exist.

Hundreds of articles about the delivery trial were published, but few bothered to mention the current Civil Aviation Authority (CAA) rules.

A CAA spokeswoman also told the NBR that Domino's would also have to meet requirements of local council, iwi and the NZ Transport Agency and Department of Conservation.

"We need to be satisfied that the applicant can meet the stringent requirements and demonstrate that it has a robust and comprehensive risk management plan to run this operation safely," the CAA said.

Pie in the sky

"I can't truly see how commercially viable that idea is because you would have to literally have somebody walking along to keep it in the line of sight, watching it at all times"

Mr Keall said Domino's knows all of this - but it doesn't matter:

"The drone has already done its PR job," he said.

If the job was to trigger the media's insatiable appetite for novel yarns about fast food, it certainly has.