A former editor warns the weakening of the news media threatens our right to know - a right we tend to take for granted. How should the media respond?

Earlier this month, comedian John Oliver tackled the economic problems of modern journalism on his satirical cable TV show in the US, Last Week Tonight.

Oliver said the “food chain of journalism” was breaking down in the US as newspapers downsize their news operations to stay afloat. He told his viewers they were part of the problem, because too few people care enough about journalism to pay for it.

And while a British comedian on a US network struck a chord, a local media identity has been pointing out some of the same issues at play here - but with fewer gags.

Gavin Ellis is former editor of The New Zealand Herald and Nine to Noon's regular media commentator. Since he left the Herald in 2004 he’s become Dr Ellis, researching and teaching trends in modern media at the University of Auckland. He’s also a prime mover of the Civics and Media Project -  a joint initiative of six public agencies aiming for "a well informed civically-engaged New Zealand in 2030."

In his new book, Complacent Nation - published this month by Bridget Williams Books - Dr Ellis says it's getting harder for shrinking newsrooms here to hold power to account.

Official information is routinely assessed for political risk before it is authorised for release by ministers and public servants. Sometimes, it doesn’t get released at all for that reason.

Many journalists have complained long and loud about this. Dirty Politics threw the issue into sharp relief too.

But Dr Ellis believes the problem goes far beyond that. Many public institutions obstruct the free flow of information too. 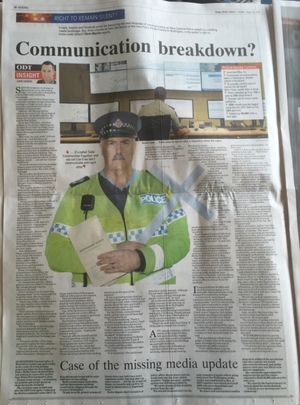 The Otago Daily Times devotes a full page this weekend to its struggles getting information from the New Zealand Police. Photo: supplied

In May, the Police opened a centralised communications office in Wellington. It is staffed by communications professionals and was designed to respond to the increasing number of queries from media operating round the clock in the digital environment.

The Otago Daily Times has noticed the difference. This weekend the paper said comment from local police was harder to get because calls are directed to Wellington. Brief responses by email are received in reply.

"Some Otago police continue to welcome the media interest," said the ODT's Chris Morris. "Others now greet the arrival of a reporter at a cordon with stony silence".

The ODT reports one email in which Southern District commander Mike Pannett says officers should not to comment if contacted by media - "especially printed media".

Dr Ellis told the ODT the system "appeared to be designed to control the message ... and could restrict public debate on important issues".

The right to know under threat 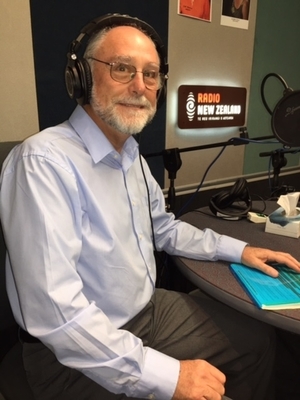 Dr Ellis begins Complacent Nation with the story of University of Canterbury academic Dr Jarrod Gilbert being cut off from information about gangs by a restrictive Police policy, which was amended after Dr Gilbert went public.

"There is a protracted war between the public’s right to know and political or bureaucratic self-interest. It is a war largely ignored by a general public that is either indifferent, or beguiled by the belief that ‘we live in a free country,’ Dr wrote in his new book.

In the book - and on TVNZ’s Q+A show earlier this month, he also said it might take "a nasty jolt" to change that belief.

"The loss of a right. If we had a significant reduction in the right of self-expression, maybe that would be enough", he said.

This week, the Prime Minister flagged that Kiwis' right not to be spied on by the GSCB will be signed away with a change to the law which will also introduce jail terms for people who leak government information.

As if to back up Ellis’ claim about Kiwi complacency about such things, the news featured only fleetingly in bulletins.

"Together, media and audience have created an infernal dumbing down machine that is allowed to keep running because demands for improvement lack the commercial or political force to throw a spanner into the works."

But are the news media today less serious or powerful than 10, 20 or 30 years ago?

"Look at the type of content they carry - and what they emphasise," he told Mediawatch.

"Emotive elements often over-ride the stories people need to know about. I talk about oases of investigative journalism today, and they are really important. But to have oases, you have to have a desert."