OlympicWatch: the perils of Rio

New Zealand media at the Olympic games have painted Rio as a place of peril, while outlets without reporters on the ground seize on clickbait. 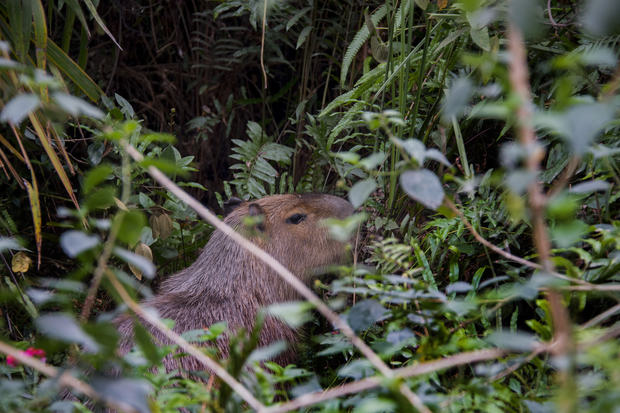 The world's largest rodents lie in wait at the Olympic golf course - just one of Rio's risks alarming the media.  Photo: AFP

New Zealand martial artist Jason Lee and his journalist partner Laura McQuillan had been Rio residents for more than two years when they were heavied by military police earlier this month. Understandably, they feared for their safety and fled the country.

Their startling story seemed to spook reporters here heading for the Games.

Before he flew out, TVNZ’s Rio anchorman Peter Williams told Breakfast viewers he'd be taking off his wedding ring and only carrying an old phone and cash to pay off would-be muggers.

A steady stream of stories painting Rio as a threat to health, wealth and security followed when the Kiwi media contingent arrived, even if the athletes themselves seemed unconcerned.

Lee did say he had seen capybaras on the Olympic course. The world's largest rodents have been striding around the greens in full view.

"They can grow to four feet in length. They can swim and run. They often live in packs of a dozen or more," stuff.co.nz reported breathlessly.

An unfazed Danny Lee told TVNZ he thought they were "pretty cool".

Something in the water

But it was also human nature that alarmed New Zealand’s reporters in Rio as the Olympics got under way last weekend.

"Two Australian coaches have been robbed at knifepoint at Ipanema, and a bullet landed near a New Zealand Olympic staff member at the equestrian centre," TV3’s Newshub at Six reported on opening day.

But the equestrian centre was not actually the target - and there was no bomb. To be on the safe side, bomb-disposal experts blew up an unattended bag near the finish line of the men's road race. 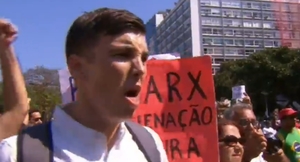 TVNZ's Jack Tame reacts to pepper spray in the air at a protest in Rio. Photo: screenshot

"This day has not been without more violence and controversy," said TVNZ's Peter Williams kicking off One News on opening day.

TVNZ reporter Jack Tame - who is also a New Zealand Herald columnist  - was among those at a protest in support of the ousted president at Copacabana beach.

"Jack Tame has been caught up in the cross fire during heated protests," the NZ Herald reported, though he wasn’t in the middle of a hail of bullets - he'd merely caught a whiff of that police pepper spray unleashed during the demonstration. 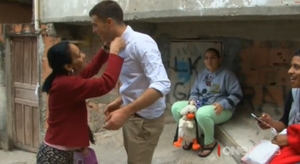 A favela dweller smartens up jack Tame for TVNZ. The man on the right has not just stolen his smartphone. Photo: screenshot

Tame been one of few New Zealand reporters to get out of the Olympic bubble and report on what is happening in the rest of Rio. Last week for example, he went to a Rio 'favela' - or slum.

Favelas can be lawless places, but when a one resident laid hands on Tame in that TVNZ report last week, it was only to straighten out his collar to make him look right for the camera.

So far as we know he got out of there with his cellphone and his cash.

Boots on the ground

By contrast, both major New Zealand news publishers have no reporters there at all. The New Zealand Herald's owner NZME and Fairfax Media both boycotted the games claiming the broadcast rights holder Sky TV had imposed too many conditions on them. This week the case went to court.

Fairfax's chief editor Sinead Boucher told Mediawatch recently their coverage would not be second-hand or second-rate and The Herald has promised its readers Rio coverage “from all angles”.

When it was reported that unauthorised drones were hovering over the opening ceremony, former Herald editor Tim Murphy joked on Twitter that NZME and Fairfax might be at the controls.

Both outlets have certainly got the clickbait covered.

Last Monday, The Herald offered gruesome video of a French gymnast's broken leg: Enough people clicked on that to send it to the top of the “most viewed” list on nzherald.co.nz.

The following day The Herald’s the chart was topped with: Cycling leader in horrific crash. The daily online bulletin Herald Focus ran the footage again with presenter Tony Veitch saying solemnly: "We wish her all the best". 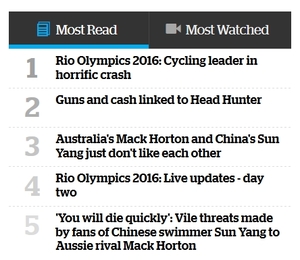 In other words: "Get well soon, and thanks for all the clicks".

Fairfax Media’s stuff.co.nz also posted the video of that crash - and this story about scenes from the swimming aired on British TV.

"When is a hand on the thigh just a bit of cheeky touching, and when is it something more?"

The two former British swimmers are complete unknowns here, yet stuff.co.nz ran three more stories in the following days about their on-screen leg-touching.

Across the table from them, BBC presenter Helen Skelton did not touch anyone but also ended up on stuff.co.nz under the headline: BBC presenter's short skirt sparks controversy. 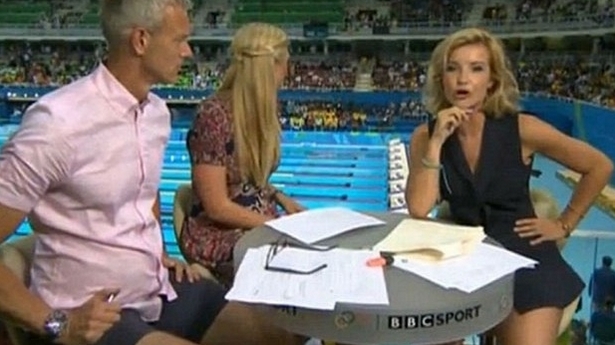 The BBC scenes that caught the eye of stuff.co.nz - and drew hundreds of comments from readers. Photo: screenshot

Nothing was said about her male co-host's shorts which were just as “revealing” as Skelton’s skirt, but not nearly as “revealing’ as outfits worn by the swimmers in the pool at Rio.

Why was New Zealand’s biggest online news outlet bothering with all this about three British people New Zealanders don’t know from Adam anyway?

The item attracted hundreds of online comments in which stuff readers bickered about whether this was really news, and one hit nail on the head with this:

"This is in the list of most popular articles, despite people claiming its a non-event. That's how non-events become events".

That is indeed how it is in the online media era.