Does free-speech = freedom to advertise?

A former owner of the New Zealand Herald recently made news after failing to place an ad in two of Australia's leading newspapers. A Wellington magazine attracted the wrath of readers after accepting an anti-abortion ad. What are the rights and wrongs of publishing controversial advertisements? 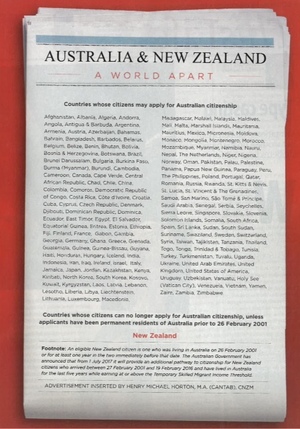 Former Herald owner Michael Horton recently told TV3's Paul Henry that an ad he unsuccessfully attempted to place in The Australian and the Sydney Morning Herald newspapers last year came to him "like a vision from heaven".

But it seems the Aussie papers were not feeling the heavenly inspiration, and neither accepted the ad for publication.

Mediawatch got in touch with Sydney Morning Herald publisher Fairfax Australia and The Australian to ask why they had rejected the ad - which was titled "Australia & New Zealand: A World Apart".

It highlighted what Mr Horton saw as Australia's unequal treatment of New Zealanders compared to citizens of other countries when it came to applying for citizenship.

Fairfax responded: "We can't find a record of Mr Horton's ad submission. Mr Horton is welcome to place his ad with our advertising department and it will be considered for publication according to our standard advertising terms and conditions."

The Australian did not respond. But Mr Horton told Mediawatch the paper claimed to have concerns with inaccuracies in the ad - something he rejected. He said it was more likely to be sensitivity around publishing an ad that called into question Australia's treatment of New Zealanders close to Anzac Day.

Mr Horton is far from alone when it comes to wanting to kick off a public debate with an advert. 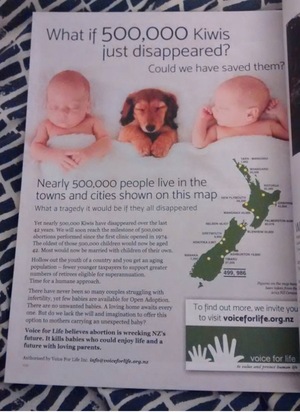 An anti-abortion ad that appeared in Capital magazine Photo: supplied

More than 90 comments on its Facebook page expressed disappointment or anger.

"Capital Magazine, I love you but I was so so, so disappointed to find a full page anti-abortion ad in your latest issue. There is so much troubling language in it, all disguised under the veneer of loving babies. It literally says the words ABORTION IS WRECKING NZ's FUTURE. Come on dudes. I wouldn't be opposed to an informed dialogue around adoption and abortion issues in Capital, but the inclusion of this insidious, one-sided ad really damages the integrity of your magazine in my eyes. Unfortunately, I will think twice next time I go to buy it."

Capital editor, Alison Franks, responded: "We knew this ad would be challenging for some of our readers and the decision to run it wasn’t taken carelessly or lightly. We decided questionable though its message may be, supporting freedom of speech was important. Freedoms like this have been hard-won and from time to time, will lead to heated debate.

"One of Capital’s aims from the beginning was to reflect the excitement and diversity of Wellington back to the community, differences of opinion are part of that. It is important and fair for all communities that contentious issues are discussed"

So does freedom of speech equal a freedom to advertise? Not in Michael Horton's view. He said the Australian was quite within its rights to reject his ad.

"They’ve got that right and they don’t have to give a reason for it. Goodness knows in my time we turned down many ads at the Herald for one reason or another."

And he would absolutely reject an ad if he thought it would offend his readers, he said.