All Blacks for hire in the news

Editors are usually keen on a story if there’s an All Black in it. But sometimes the story is really about the big brands which are backing them. 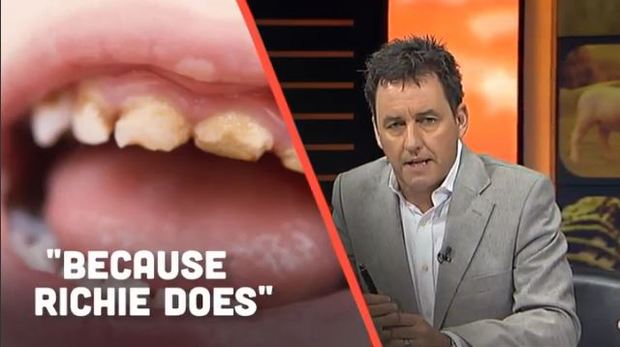 TVNZ's Seven Sharp show covering the controversy over the All Blacks' endorsement of a sugary drink. Photo: screenshot

Recently stuff.co.nz reported health experts were calling for an end to sponsorship deals between sports people and “junk food giants”:

Last week, a five-year-old boy walked into hospital, before an appointment to have his teeth pulled, drinking Powerade. When asked why he was drinking the sugar-filled energy drink he replied "because Richie does".

The story wasn’t exactly breaking news. It had appeared on June 1 when The Marlborough Express reported its District Health Board's submission to a review of the rules for advertising to children.

TVNZ’s Seven Sharp show raised the issue too that night, but the review was not exactly breaking news either. It was launched last October, the same day as a government anti-obesity drive, as Mediawatch reported at the time.

Other DHBs and doctors' groups made similar submissions to it without making any headlines. It was only the mention of McCaw in the Nelson/Marlborough DHB's one that made national news.

Ironically, McCaw has been in the media a lot lately promoting a company producing stuff that is much better for most kids' teeth.

A Fonterra campaign has been appearing on nzherald.co.nz for the past month, built around stories about people getting New Zealand's milk to market. McCaw is not promoting Fonterra products as such, but the company itself. That is pretty clear from the videos embedded in the stories, in which he asks "tough questions" about Fonterra and farming issues.

The online articles are marked “brought to you in association with Fonterra” on the Herald website, but it was not so clear cut in another recent case of an All Black promoting a brand in the New Zealand Herald - and elsewhere.

In May, the Herald ran a story stretching over two pages about All Black Victor Vito and his wife Amber heading to France soon where he will play rugby.

“Victor and Amber Vito were interviewed in their role as ambassadors for food processor Thermomix," the story said. The food processor was prominently pictured too. 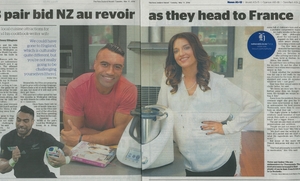 Victor and Amber Vito - and their favourite cooker in the Herald Photo: RNZ/photo

Herald readers were also urged to go to the website for a video which started out with a Thermomix in shot before Victor and Amber Vito were even in the room.

The Herald’s reporter then asked the couple about moving to France, then French food - and before long the Thermomix was being fully endorsed by the couple.

The Herald told RNZ the article and video were not sponsored content, and Thermomix did not pay for the publicity. The interview and video was arranged with the Vitos via email and the Herald did not agree to feature the Thermomix as a condition of getting the story.

This was deemed to be a story about the family of Victor Vito moving to France, said the Herald, not one mainly about the product they were promoting. 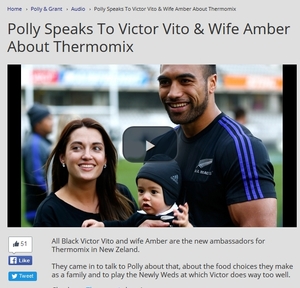 But that wasn't that case when the couple appeared on radio station The Hits, owned by the Herald’s parent company NZME. Under the online version of that interview, there’s a link to the Thermomix website and readers are implored “to check it out by clicking here”.

While there's little genuine news value in the Vitos' enthusiasm for the Thermomix, the cooker was actually in the news at the time.

On May 12, the Herald's website ran a story about an Australian victim under this headline: 'The worst pain you can imagine'.

In the news for the wrong reasons

"All Black Victor Vito has become the Kiwi ambassador for a kitchen appliance that has left dozens of Australian customers injured after being sprayed with high-speed, boiling liquid," said his story for stuff.co.nz.

"When approached by Fairfax's stuff.co.nz, Vito said: "It's nice of you to call but I can't take calls about this type of stuff.' He then hung up."

But the same day all that hit the website, so did a very different story by another reporter headlined:"All Black Victor Vito ups his game in the kitchen".

He proved this by making a risotto for Fairfax's reporter Laura Walters.

"The pair, who were made available as part of their new deal representing Thermomix in NZ, say the new-age kitchen appliance has helped them cut down cooking time while still creating healthy, tasty meals," said her story, which made no mention of safety concerns or reported injuries in Australia.

The Thermomix featured prominently in the online video for this story too.

There’s nothing new about sports stars and their families promoting products in the media, or only being available to the media because a sponsor or agent of some kind has made it possible.

But the label "advertorial" or "sponsored content" should definitely be attached, to signal to readers that it’s really a commercial endorsement rather than news.

It would also help to reassure readers that editors and their bosses know the difference.

It's a tough life sometimes #TeamFairfax If you want to join check out these roles https://t.co/3nHUJ4jjQe https://t.co/5KKRur61DT