A controversial confessional and a confronting campaign

A New Zealand Herald campaign on family violence was overshadowed when its Sunday edition published a confessional piece by broadcaster Tony Veitch. 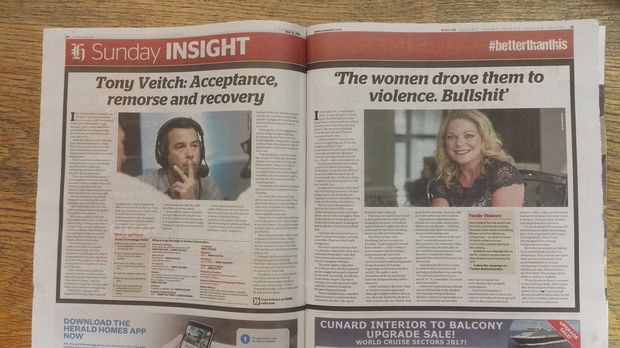 This week, the New Zealand Herald campaign against family violence – We’re Better than This – featured the moving stories of abuse survivors, thoughtful backgrounders on the extent of the problem and first-person accounts about the lingering anguish caused by acts of violence.

"New Zealand has the worst rate of family and intimate-partner violence in the world," said the series' introduction. "Eighty percent of incidents go unreported — so what we know of family violence in our community is barely the tip of the iceberg."

The project, anchored by reporter Anna Leask, was ambitious.

"Our aim is to raise awareness, to educate, to give an insight into the victims and perpetrators. We want to encourage victims to have the strength to speak out, and abusers the courage to change their behaviour."

Unfortunately it was an abuser speaking out  - without reflecting on his own behaviour, critics said - which ended up being the focus of much of the commentary.

The Herald on Sunday previewed the campaign with two strong personal pieces side-by-side. In one, NZME radio host Kerre McIvor said men who hurt women must never blame women for it, and on the facing page NZME sports broadcaster Tony Veitch began his piece like this:

"It is 10 years since I turned from the man I'd always wanted to be, to a man I could not control. In January 2006 I made a huge mistake, a grave misjudgment on my behalf that has impacted the lives of many people and for that I am truly sorry".

The “mistake” he was talking about was a serious assault on his partner Kristin Dunne-Powell 10 years ago. In 2008, Veitch pleaded guilty and was fined and sentenced to community service.

He was stood down from his jobs as TVNZ newsreader and radio host, though he later returned to radio and is now a key personality at NZME, owner of the Herald and a clutch of radio stations.

His first-hand account continued: "Poor judgment on my behalf changed so much that day and I apologise unreservedly for that. I live with what I did every day and as a result of my role in media, I live with it everywhere”.

When it comes to poor judgement it’s hard to go past Veitch’s decision to write the column and the Herald on Sunday’s decision to publish it - especially with the We're Better Than This campaign about to launch.

As Veitch acknowledged, he’s not the only one who lives every day with that "grave misjudgment", but was any thought given to how Ms Dunne-Powell would feel about the article?

The Stuff website published a response from her father that afternoon.

"In the 10 years since Tony Veitch broke my daughter's back, she has rebuilt her life completely," Steve Dunne wrote.

"We are immensely proud of her resilience and the person she is. I have witnessed her pain again today, on what should be a special day for her and our family. The constant reminders of this public case also haunt her as she attempts to go happily about her daily life".

Mr Dunne went on to criticise the Herald on Sunday for publishing another reminder.

"Allowing Mr Veitch's self-serving propaganda (again) astounds us. And positioning him as part of the solution is an insult to all true victims of this tragic issue. If this 'apology' showed genuine remorse, it would have been given privately to our daughter. She has never received one."

In his statement, Mr Dunne also took issue with Tony Veitch’s claim he made “one huge mistake”.

On Tuesday, Fairfax journalists Eugene Bingham and Paula Penfold wrote about six other alleged attacks detailed in a statement to police by Ms Dunne-Powell. This was released to the media, including Mediawatch, in 2009.

The charges relating to the alleged assaults were dropped so Veitch had no chance to defend them - something he said he would have done.

While the allegations never went to court, the Herald on Sunday must have been aware of Ms Dunne-Powell's allegations she was assaulted more than once.

Mr Dunne made clear in his statement, it wasn't the first time the Veitch's employers had downplayed allegations about him, and it had caused further distress to his daughter.

When the charges against Veitch were first reported back in 2008, some of his colleagues at the Herald and ZB went public with their support for him. Paul Holmes even interviewed Veitch, as a friend, for the Herald on Sunday and spoke to his good character on ZB.

When, in 2009, The Dominion Post revealed details of a confidential payment Veitch made to Ms Dunne-Powell, his radio colleagues again backed him on air - and en masse.

One of them was Kerre McIvor. In April 2009, she wrote in the Herarld on Sunday about "dark forces conspiring to bring him down”.

"Kristin Dunne-Powell certainly wouldn't have derived any satisfaction in seeing a sad and sick part of her life put under the spotlight, " McIvor (then Kerre Woodham) wrote.

And we know from her father’s response she wouldn’t have wanted Veitch and the Herald on Sunday swinging the spotlight back onto it again now - and airing a version of events she contests.

Perhaps the paper thought it was addressing the elephant in the (news) room  - but did it undermine its own excellent campaign on family violence?

The slogan for that again: We’re better than this.