Long-serving news chief Mark Jennings has resigned from Mediaworks, the owner of TV3 and half the country's radio stations. Mediawatch looks at his departure - and the man coming from Australia to replace him.​

Mark Jennings was by far the country's longest-serving news boss and it's surely not a coincidence he has left just after the launch earlier this month of Newshub, Mediaworks' new integrated digital-first news service. This effectively killed off the 3 News brand Jennings shepherded though TV3's turbulent existence.

He had been with TV3 since its beginning in 1989. When 3 News was established it had to attract viewers and gain credibility against vigourous opposition from an established incumbent - TVNZ, which formerly had a monopoly in TV news. Ever since then, Mr Jennings has competed with his rival on smaller budgets, but with greater restrictions and uncertainty. 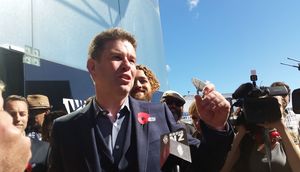 John Campbell at a rally to try to save his show in Auckland last year. Photo: RNZ / Tiana Barns

At a symposium discussing media ethics several years ago, he was asked about the rights-and-wrongs of using hidden cameras. He said getting his hands on any camera to film a run-of-the-mill story was a challenge on any given day, let alone for one raising complex editorial issues.

During the controversy surrounding the scrapping of the popular (but not popular enough for management) Campbell Live show last year, Mediawatch asked Mr Jennings if this was part of a drive to make the company more attractive to potential buyers. He said it wasn't - but added that the company had effectively been for sale almost all the time he had worked there. 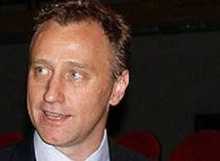 The debt-laden broadcaster was taken out of receivership in 2014 by new chairman Rod McGeoch, chief executive Mark Weldon - a former boss of the NZX - and former TV producer and entrepreneur Julie Christie, a specialist in reality TV who was given an acting role in the company's TV strategy.

It became clear they did not favour the news shows produced by Jennings' journalists, and current affairs shows Campbell Live and 3D were cut, while projects favoured by the top brass  - such as Paul Henry and the Rachel Glucina showbiz site Scout - got the green light. It's also telling that many journalists who fell victim to the changes of direction didn't blame Mr Jennings for it.

Even though he made me redundant (although we all know it wasn't actually him) I say hand on heart that Mark Jennings will be very missed.

The first inkling of Mr Jennings' exit this afternoon came not from TV3's Auckland HQ, but from Australia.

The NineMSN company - an offshoot of the Channel 9 TV empire in Australia -  announced its editor-in-chief and publisher Hal Crawford would be leaving in May to join MediaWorks as "chief news officer".

Hal Crawford said in a statement: “I have seen (NineMSN) transition from a joint-venture to a 100 percent-owned digital arm of a dynamic media company. Now it’s clear it is committed to digital - and digital will be key to the future of the company".

These are thoughts that chime with Mr Weldon's mission to transform Mediaworks from a TV-led news operation into a digital media outfit.

Hal Crawford has experience in newspapers and online news, and is a current member of the Australian Press Council. He has no experience in broadcasting, but in his statement he said he was looking forward to leading Newshub.

The strategy of a fully converged TV, radio and digital brand is unique globally. This is an opportunity to move beyond the delivery method and focus on the stories and the audience.

Sharing the news on new channels

At NineMSN he found his audience getting more and more of its content not from NineMSN or its partners, but directly from friends sharing it on social media networks. Recently he wrote a book called All Your Friends Like This: How Social Networks Took Over News.

In it, Hal Crawford argued people like stories that are simple, emotional, new and which trigger a response which makes them want to share them online.

Hal Crawford's view of what news people share online came out of a project he co-founded called Share Wars, an effort to find out just what it was that people shared the most from the world's biggest sources of online news. These were stories "evolved to attract out attention," he said.

Hal Crawford from didn’t want to be interviewed by Mediawatch until he takes up the job of Chief News Officer in May, but in August last year the ABC's Media Report show asked him: if editors followed his advice, would they end up depending forever on Facebook?

"Yes, but not because it's Facebook," he said. "We are forever dependent on (public taste) and we always were, but we didn't realise it. Even in the days of hot lead, newspaper editors wanted stuff the audience valued, but they were working in an information vacuum. As you see what the audience is doing (online), everything changes".

But where, The ABC Media Report show asked, does that leave the boring but significant stories which often lead bulletins and newspaper front pages, but are not nearly as 'likeable' on Facebook?

Hal Crawford is due to take over as chief news officer at Mediaworks in May. It'll be fascinating to see if he manages to make boring but significant news interesting - and shareable - for New Zealanders.