How things have changed for the media in post-quake Christchurch

The five years since the 22 February 2011 quake have been turbulent ones for the media in Christchurch. Mediawatch looks back at how things have changed. 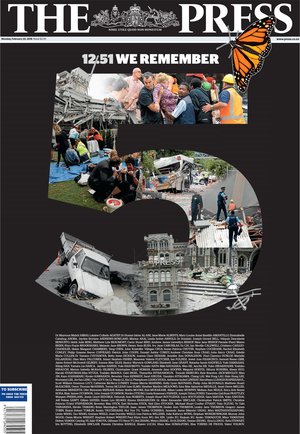 The front page of The Press on Monday. Photo: supplied

On Monday Christchurch's daily paper The Press marked the fifth anniversary of the devastating quake with a front page bearing the names of all 185 people who died that day and the headline "We Remember”.

Some of its readers also remember how The Press responded to the quake five years ago. An edition of the paper arrived at the homes of many subscribers around the shattered city the morning after, as if it was just any other day.

The front-page headline was “Our Worst Day”, but it was also the finest hour for The Press and its people.

The fact that the quake wrecked The Press building in Cathedral Square, killing one of its employees and leaving others trapped inside, made the effort all the more remarkable.

At the time editor Andrew Holden told Mediawatch: “There was no question in terms of the reporters. Their response - looking back at the Square and their collapsed building - was to swing into action, get across the city and file as quickly as they could.”

Above and beyond the call

The Press' new printing plant by Christchurch airport was undamaged and, crucially, still had power. The Press's stable mate The Dominion Post, based in Wellington, laid out The Press and sent it back electronically. But getting it to people’s homes after an earthquake was another matter. The paper's delivery contractors went the extra mile - quite literally.

“They did an extraordinary job. They’d gone out to look at their areas that afternoon and it showed their determination to do the job," Mr Holden said. "In Sumner the roads were out or buckled, they went over Dyers Pass Road and round the back, and they got to Lyttelton”. 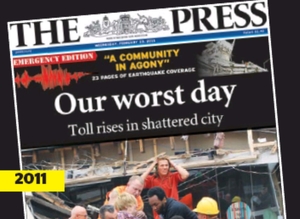 The front page of The Press 'Emergency Edition' on 23 February 2011. Photo: screenshot

While people all over the world were reading The Press reporters' accounts online, many in Christchurch were in the dark. With mobile phones and television not working in many places, and radio batteries running down, news on paper was doubly valuable.

Among those stunned to see The Press on his driveway on 23 February 2011 was the paper’s own TV reviewer Trevor Agnew.

“I didn’t believe that could have happened. They’ll lose money because there’s no advertising, but they can be very proud of it,” he told Mediawatch at the time.

Christchurch’s other citywide paper, The Star, also responded after the quake struck even though its own HQ was damaged. With help from its publishers - at the time APN, owners of the New Zealand Herald - the free weekly published 25,000 daily editions which were delivered to shops and community centres.

TV3, TVNZ, Newstalk ZB and RNZ all broadcast live, continuous coverage on the day, and carried on reporting even though all their premises had suffered damage too. The national networks all lost their Christchurch offices and studios and by 2013 all but one was demolished. 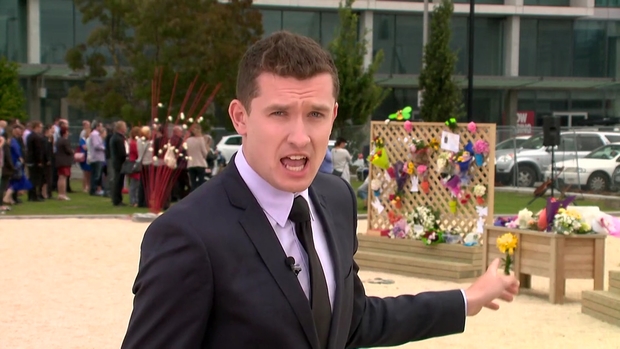 CTV broadcasting live from the site of their former building on the fifth anniversary. Photo: screenshot

Hardest hit was local television station CTV, the best and most established local TV broadcaster in New Zealand. Sixteen CTV staff were killed when the CTV building, that bore the station's name, collapsed in the quake.

At the time, Mr Agnew told Mediawatch the recovering, rebuilding city could really use its local TV station but he feared CTV would never be back.

Now in new premises, CTV broadcasts more local programmes than before from Kaikoura in the north to Waimate in the south. On the quake's fifth anniversary CTV broadcast live from the place where so many of its staff lost their lives. 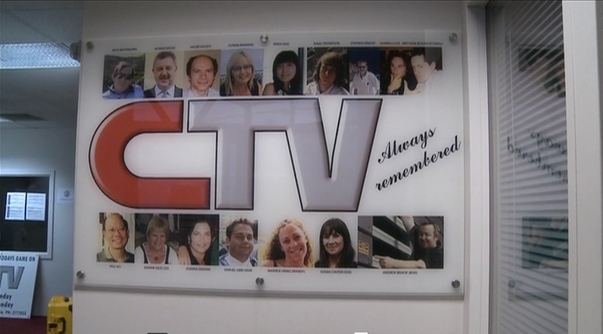 CTV's new premises have a memorial to those who died in its former building. Photo: supplied

CTV broadcasts 30 minutes of local news each weekday, with $240,000 a year from New Zealand on Air's funding for regional TV - just over $20,000 more than the funding it got in 2011. By contrast, NZOA invested more than $5 million in a TV3 three-part drama, Hope and Wire, about the quake.

Volcano Radio in Lyttelton - which was so near the epicentre of the quake - was back on air within a day. Co-owner Carmel Courtney said it became a de facto community centre as most of the main street was destroyed, including the cafes where people usually met. A mobile coffee cart outside the station helped with that.

Volcano Radio eventually closed when an aftershock struck in June 2011. Other low-power FM local stations around Christchurch were silenced too.

But radio broadcaster Chris Diack created a brand new one. Within ten days of the quake, he had secured a temporary FM licence and moved his mobile radio van from Invercargill to a school in Christchurch's eastern suburbs to create Radio New Brighton.

Student station RDU also went mobile, moving out of the University of Canterbury and into a horse truck, which served both as a transmitter and a stage for live bands. Small ones, mostly...

A horse racing venue became the home of TV3 and Mediaworks radio. Executive suites in the Twiggers Stand became editing suites for TV news when they moved into Addington raceway.

"Like a lot of people, we've had to move out of the central city to do work," TV3's Christchurch reporter Jeff Hampton told Mediawatch a year after the quake. It's weird to be editing stories while horses are galloping round in the paddock," he said, adding - tongue-in-cheek that the location at least saved some of the staff a trip once a week.

RNZ and some talk radio stations spent most of 2011 broadcasting from motel rooms, before moving into buildings on the edge of town. Smaller media companies found other solutions. The editor of Tearaway, the national newspaper for high school-age kids - ran the publication from a laptop in Melbourne because the office of its publishing company was stranded in the Red Zone.

Before the quake struck, The Press staff were looking forward to moving to plush new premises in the centre of the city. One year on, they were instead working at the printing plant by the airport, in a series of portable cabins linked by wooden walkways. Senior reporter Martin van Beynen was working elbow-to-elbow with his editor Andrew Holden. The cabins were neither roomy nor airy.

"It literally brought us closer together, bonded us with one purpose," The Press chief reporter Glenn Conway told Mediawatch.

It didn't really matter whether we were doing it in a luxurious office or round a picnic table in Portacom City. When I look back in my rocking chair and pipe and slippers, it will be a career highlight for me. It was a sad, but special and significant time for many of us".

Trauma and tiredness takes a toll

The time for rocking chair reflection was still a long way away at that point. Like others caught up in the quake, many journalists felt the effects of trauma. Some told Mediawatch they felt Christchurch was becoming "a single issue city" for them.

In 2012, the US-based Dart Center for Journalism and Trauma took several Christchurch journalists on a retreat to discuss trauma which, coupled with fatigue and uncertainty about the future, had taken a toll on some.

Sean Scanlon, a news editor at The Press, researched how the experience of Christchurch's journalists affected their reporting. Among his conclusions:

Local reporters are personally and emotionally connected to the story to a greater extent than anything they have covered before because they experienced the disaster and its aftermath with their audience. That is not necessarily bad for their journalism but, channeled properly, can make their reporting more useful for the community they serve."

Adding to the psychological stress on Christchurch journalists has been tension between reporters and swelling ranks of PR staff employed by government, the Canterbury Earthquake Recovery Authority and other outfits.

In 2012, the government irritated journalists by stage-managing the unveiling of the central city blueprint live on the 6pm TV news. The NBR's Chris Hutching, who disregarded the embargo on the information to make a point, told Mediawatch journalists were outnumbered by ex-journalists "moving seamlessly" into PR.

"Journalists need to be more probing than ever at this time. To begin with, they couldn't get enough of us. Now, they don't wan't to know us," he said.

Last month, CERA confirmed it had spent more than $2.5 million on PR in the last financial year.

By contrast, backing for journalism in the region has been scaled back. In 2013, APN sold all its South Island papers including The Star to local company Mainland Media. 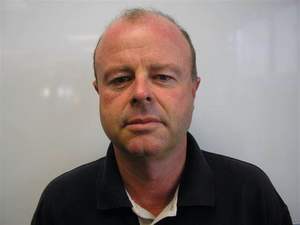 TV3 show Campbell Live was feted by Christchurch's people for the focus it brought to bear on people's problems with EQC and insurance companies, but TV3 owner Mediaworks scrapped the show last year.

Mr Hampton told Mediawatch there are fewer reporters working in Christchurch now than there were before the February 2011 earthquake.

"People in the South Island see the journalists as their advocates, especially after the earthquakes," said Mr Hampton."They've seen us as a place to go to for standing up to authorities. If we are not there, who do they go to?"

Five years after The Press rose to the challenge of covering the quake, the paper published an editorial in the form of an open letter urging New Zealanders to stay interested in and engaged with the city's recovery.

It ended with a warning:

This disaster will not be the last to hit this country. The chance of a quake in another part of the country is high. Every individual, business and policymaker needs to be ready to cope with a disaster of this scale."

As The Press knows only too well, the same applies to the media too.