Running it up the flagpole

Voting is under way in the flag referendum and pundits, politicians and presenters alike have been pushing their preferences in the media - even if they pretended not to. 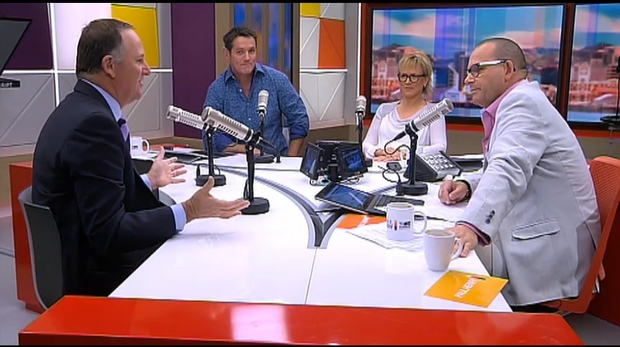 The Prime Minister was on Paul Henry's radio and TV show last Tuesday, doing the regular weekly slot in which he fields questions about big political issues of the week. But John Key was also determined to raise an Irish newspaper's front page tribute to Jonah Lomu which featured a silver fern. John Key said the current flag was no use in this context and he was so keen that TV3's viewers should see The Irish Examiner's image he practically instructed Paul Henry to put it up on screen. 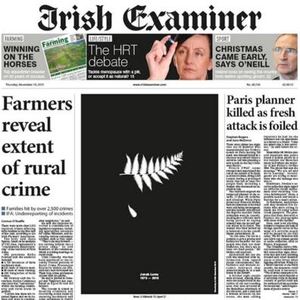 John Key was criticised later for linking Jonah Lomu's death to his preferred flag during the voting period, and he responded with this:

The point I was trying to make this morning is that that was the symbol that was used by the international media to reflect the loss of Jonah Lomu. I think the silver fern is an international symbol.

Maybe so. But does the The Irish Examiner qualify as “the international media"? The paper is from Cork in the south of the Republic of Ireland. It sells fewer copies than the Otago Daily Times or Waikato Times. It's hard to imagine either of them could influence debate if Ireland proposes a new flag with a four-leafed clover.

On 3 News that same night TV3 said the PM had "looked to the Lomu symbol" because a 3 News poll showed a big majority don't want a new flag and political editor Patrick Gower pointed out the plain silver fern the Irish paper used isn't actually an option on the ballot.

While the PM clearly wants to sway voters, should journalists and presenters be doing that?

On TV3's show The Nation last weekend, Patrick Gower refused to say which flag he favoured. His TV3 colleague Duncan Garner has previously said he "couldn't give a toss" about changing the flag, and introducing TV3's evening show Story last Monday, he said it would be "extraordinarily arrogant" to tell viewers what to choose. 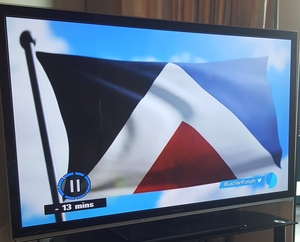 A flash-frame of Red Peak flag on TV3 during a report by Lachlan Forsyth . . . a fan of the design. Photo: screenshot

In a following item about flag design, reporter Lachlan Forsyth seemed to saying the same thing when a flash frame of Red Peak appeared on the screen. Blink and you’d have missed it, but one Mediawatch listener didn’t. He wound back his recording of Story and sent us the evidence.

At the end of Lachlan Forsyth's report, the Red Peak design was displayed on the desk of Story's hosts. Maybe just an accident and not an endorsement, but they need to be more careful if the hosts are saying their programme is neutral.

That night, Story co-host Heather du Plessis-Allan urged viewers to visit the show's website to read a blog by Lachlan Forsyth on the issue, in which he nailed his colours to the mast.

"I am utterly biased in the flag debate, and say you should absolutely vote Red Peak," he wrote. "If flags speak in an internationally accepted language of flags, then four of our five designs are illiterate, and Red Peak is the only one that makes sense."

That, presumably, explains the cheeky flash-frame in his report that night, in which he claimed he wasn't expressing a preference.

Lachlan Forsyth wrote a more considered online piece for Story back in September, before Red Peak became an option in which he condemned the process as "a Clayton's referendum":

Choosing from these four options we’re being presented with is like choosing which strain of flu you’d prefer to catch.

Another broadcaster who disagrees, but was also determined to air his preference this week, was Mike Hosking.

In his Mike's Minute opinion piece last Tuesday he said he'd be voting for the fern flag that's also the PM's preference. Even if polls showed a minority back it now, it will be closer in the one-on-one vote in March, he reckoned. That morning, the PM himself told Mike Hosking the same thing on his Newstalk ZB Breakfast show.

Mike Hosking dismissed much of the debate and discussion happening now as "peripheral bollocks". He may be right, but a lot of it is coming from politicians, pundits, presenters and journalists airing their own opinions while voters make up their own minds.