The number of children in New Zealand killed by violence or neglect in recent years is alarming - and so is the number of official initiatives to address this, which have had little impact.

It's a subject most people don't want to think about too much, but this week Fairfax Media confronted it in print and online. 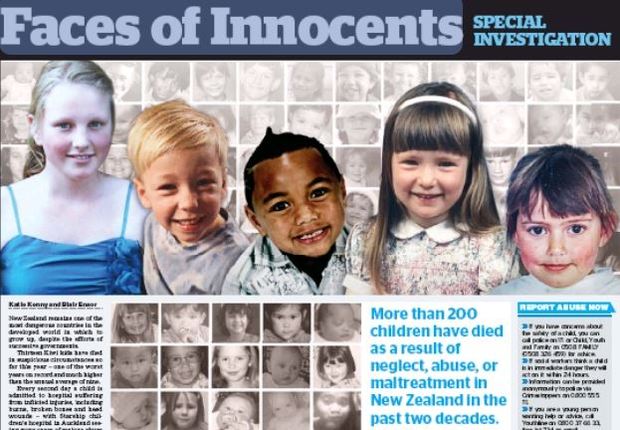 The front page of 'The Press' last weekend. Photo: screenshot

Readers of Christchurch's daily paper The Press could not have failed to notice the children staring out at them from the front page last weekend. Inside, five articles focused on individual children who have been killed, our track record on preventable child mortality and the evidence linking deaths of children to deprivation.

The editorial in The Press said bluntly:

The long-standing belief that this country is universally a paradise for youngsters has been shattered, revealed as a charade by this study of child homicide in New Zealand.

There was a lot more in other Fairfax Media newspapers around the country too, and online at stuff.co.nz. Dominion Post police reporter Talia Shadwell showed the problem is not going away while Christchurch-based crime reporter Blair Ensor reported a record number of children have died in suspicious circumstances in the South Island this year.

While the words and the facts on their own are confronting, so are the accounts in the online video. Under the heading: "The last thing they saw was their mother holding the scissors" one father told The Waikato Times Florence Kerr how two of his children were killed by their mother 16 years ago.

At a time when commercial media companies are under financial pressure, comprehensive coverage of an issue of real public interest stands out, especially when the topic is one which may not attract advertisers or a big audience online. Clearly, a lot of time and work went into 'Faces of Innocents' around the country.

At the centre of the project was a database detailing each child under 14 known to have to have died because of neglect, abuse, or maltreatment since 1992. There were more than 200 of them. Some were names familiar from the coverage of investigations and court cases at the time – names like Coral Ellen Burrows, and the sisters Saliel Aplin and Olympia Jetson. Others were not so well known or remembered. For some there was not even a photograph for Fairfax to publish alongside the bare known facts of their life and death.

A catalogue of misery - or catalyst for change?

Many of the cases featured are now essentially historic. Many of the things being said about the issue were not new - and therefore no longer 'newsworthy' in the typical media sense. But that was part of the reason for the publishing this project.

The 'Faces of Innocents' database began at 1992 because that was when District Court judge Ken Mason released a report detailing deficiencies in the Children and Young Persons Service. Since then, there have been dozens of reviews and inquiries conducted, and restructures and recommendations made. They were recorded in a depressing animated graphic on stuff.co.nz.

So what's the point of pulling all this together now? The article introducing the series says simply:

We do not pretend to have the answers. We will not campaign for anything other than the attention that the faces of the innocents lost deserve.

Is that all? UNICEF has just launched its own campaign this week for the welfare of New Zealand children – called “Make My Future Fair” – which also focuses on failings over the past two decades. This one is urging people to campaign for change.

Fairfax Media's projects editor John Hartevelt told Mediawatch the series had three objectives: outline the problem, examine the broken promises from the past, and then suggest what might be done about it.

"Beyond this week we will add to the database," Mr Hartevelt said. "We will use it to help us understand each case and put it in the context of two decades of prior child homicide. It will be a real touchstone every time there's another case and we are confronted with dead child".

Like Faces of Innocents, UNICEF's Fair Future campaign is an elaborate online project. Wellington studio Storybox has produced a lavish online video featuring the voice of Mike McRoberts and a sentimental soundtrack. Impressive animations of children growing older and confronting problems are used to project key facts about child welfare in New Zealand and UNICEF's own call to action.

Mr Hartevelt said it was now essential to use these online digital tools to get a message across to a contemporary audience.

"We know a gigantic block of text is not likely to get a great response any more. One person may read through 2,000 words of text to get the story - and that's great - but a lot of our audience is highly visual," he said. "They want to spend time looking through all this information, and video is a good way to tell some of these stories too. It give us a greater reach than text on a page".