Dirty Politics players back in the frame

Three people prominent in the Dirty Politics controversy have been back in the news lately, but for very different reasons. One was shadowy political fixer Simon Lusk. But was he squirming in the TV spotlight this week or enjoying the exposure?​

In July last year, TVNZ's Seven Sharp show profiled Cameron 'Whale Oil' Slater as a likeable rogue with friends in high political places. It was criticised by those who'd followed his behind-the-scenes role in the exposure of Auckland mayor Len Brown's extra-marital affair and some of the other up-front nastiness on his blogsite.

Last Monday, Heather du Plessis-Allan was waving a copy of the book in the air and telling veiwers they need to know more about another political fixer featured in it - Simon Lusk. Would her co-host Duncan Garner do a better job of revealing the truth about him and his methods? 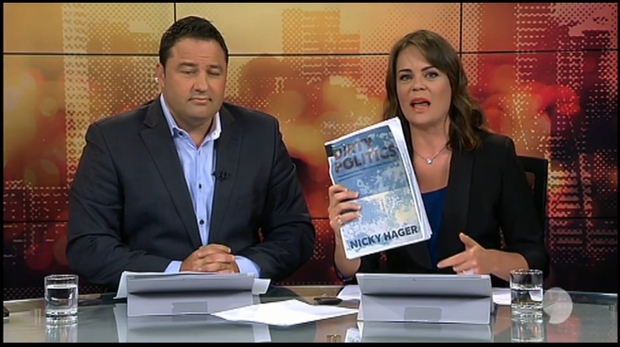 Lifting the lid - or being led by the nose?

Duncan Garner went the extra mile to get an exclusive interview with the man who says he "takes out" political candidates for paying clients. They got up close and personal on a hunting trip together.

The hunting footage on Story was a distraction, and confusing for the audience. Viewers were told they were "in the bush" and bagged two deer with five shots, but Simon Lusk was shown shooting a deer through what looked like a farm gate. 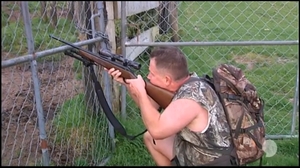 The target appeared to be in a tidy paddock, with a cow or bull in the background. 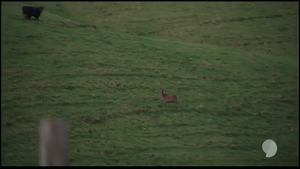 A cow in the background when a deer was shot on Story's hunting trip with Simon Lusk. Photo: screenshot

The hunting footage was interspersed with questions which Simon Lusk answered in the sort of boasts found on his own website. The revealing stuff on Story was in what was said off-camera and elsewhere.

Later in Story last Monday, TV3 reporters quizzed several MPs in Parliament about their relationships with Simon Lusk. The discomfort of some was clear. Evidently the exposure of Dirty Politics hasn't scared off all his political clients. Duncan Garner also revealed supporters of Labour’s Napier MP Stewart Nash paid Simon Lusk to canvas the option of a new political party, and that Simon Lusk had told him Labour MP Phil Twyford would be his next target.

Simon Lusk also claimed on Story he had been instrumental in unseating Mana Party co-leader Hone Harawira in the last election. Unnamed "businessmen" had paid thousands for that, he said. And in conversation with his co-host last Monday, Duncan Garner said money had been paid to get Maori electors to vote in Te Tai Tokerau.

Was political operative Simon Lusk really paying people on behalf of clients to influence an election? Disappointingly, no more was said about this claim.The following day, Duncan Garner posted a statement from Simon Lusk on the websites of TV3’s Story and Radio Live. In it, Simon Lusk said:

Iwi now have extensive databases of members who they can easily mobilise. Assembling a team of 50 or 100 iwi members to get out the vote is straightforward, legal and effective if it is possible to raise some koha.

He added that "if you’re not paying for votes or offering anything in exchange for a vote, or treating," it is not against the law. But that statement didn't answer key questions: How much was paid? By whom? And for what purpose?

The questions didn't come up the follwing night on Story either, when the programme - for no obvious reason - aired Simon Lusk's opinions of a number of politicians and their political prospects. But having failed to establish whether he is a fantasist or a truly influential operator, viewers had no reason to take his views seriously.

In Tuesday's Story show, Simon Lusk boasted business was booming for him and other consultants exposed in Dirty Politics who remain unrepentant, such as Carrick Graham. Some viewers weren't convinced:

If Simon Lusk's business was going well, presumably he wouldn't need to do ads on tele.

The journalist who has revealed the most about the operations of Simon Lusk so far is Nicky Hager, whose house was raided last year by police officers hunting for the hacker known as 'Rawshark'. Nicky Hager is only a witness in the investigation into the alleged hacking of Cameron Slater's computer data - not a suspect - and a High Court judge is currently considering whether the police raid was legal.

Last weekend the Scoop website published more files from the case released after a second request for key evidence bundles. These included affidavits asserting that the raid and its conduct could have a chilling effect on investigative journalism and dissuade future whistleblowers worried about their identities being disclosed.

Setting out the basis for a judicial review, Nicky Hager made this complaint in own affidavit:

My book had, in part, been about people who were paid very well to do unethical and possibly unlawful things. And here were the Police going after me, not them.

Another affidavit in the court files raises questions about the focus of the police investigation.

Computer security professional Adam Boileau, who - according to the summary of facts is an expert the New Zealand Police themselves have used to advise on cybercrime – said it was highly likely Cameron Slater's private data was acquired though his whaleoil.co.nz website.

Noting that other people had set up the site and worked on its upkeep, Adam Boileau wrote:

Such other people are almost certain to have been provided with access that would have enabled them to access the data that was leaked. However, there is no record of the police seeking the names of such people or following up with any investigation of them.

The Whale Oil website was hosted by a foreign company with what Adam Boileau called “a chequered security history”.

"There have been a number of well-publicised occasions in recent years during which that company has been successfully attacked for the purpose of accessing its customers' data," he said.

Over and out for Scout?

While Nicky Hager and his legal team await the outcome of the judicial review, another journalist featured in Dirty Politics has been having problems too.

The book revealed that New Zealand Herald gossip writer Rachel Glucina shared stories and information with Cameron Slater in the past. Amid controversy over the ethics of her now-notorious Ponytail-gate scoop, she left the Herald earlier this year, to start up an entertainment news website called Scout for Mediaworks. 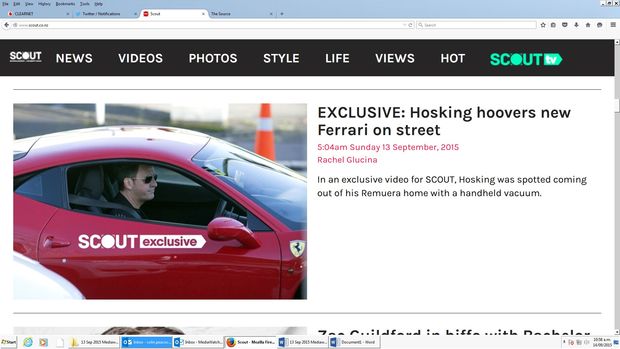 Scout launched in September, promising to be "internet breaking" but now it seems to be breaking down.

Among its less-than-compelling stories this week was one about a TVNZ newsreader wearing jandals on One News and another claiming singer Lorde "flashed her bra" after performing on a US TV show Saturday. She didn't.

Mediaworks are not denying suggestions that they have lost the last of the full-time members of the editorial team at Scout. Sources close to Scout say that Glucina is now the only editorial staff member left in the website's newsroom.

The Spinoff website published a startling account based on insiders' tipoffs and interviews with Scout staff members. Fairfax media says Rachel Glucina is now assisted only by freelancers who work off-site.

Scout is ahead of the rest: Most media took decades to lose all their staff and replace them with freelancers; Scout took just 2 months.