A widely-shared story of shame

The so-called "sexy secret" of a gameshow contestant made headlines this week, even though she's not well known, did nothing illegal and the supposedly scandalous events occurred years ago. So why was she humiliated in the news this week?

The Sunday Star-Times' front page teaser featured a photo of singer Lizzie Marvelly and the headline:

How to tame digital bullies: Lizzie fights the rise of online abuse.

The article made it clear there that online sexual shaming is rife. But it’s not just social media shaming women for their sexual pasts.

The same issue of the Sunday Star-Times sported this headline about a contestant from the TVNZ cooking contest My Kitchen Rules:

Fairfax Media's other Sunday paper, the tabloid Sunday News, filled its whole front page with the same story, which began like this:

A My Kitchen Rules contestant  - portrayed as a sophisticated snob from a plush Auckland suburb  - has posed for hundreds of hardcore pornographic images. 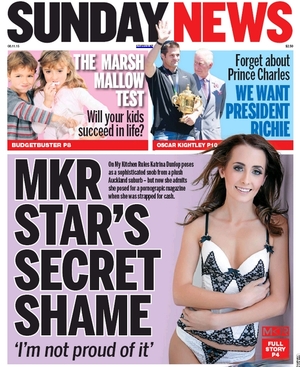 The front page of the Sunday News Photo: screenshot

The story then went on to compare the contestant to others in a roll call of what it called "Reality TV’s secret shame". Included were an X-Factor competitor convicted of manslaughter, drunk drivers from Masterchef and The Bachelor, and a Bachelor contestant previously jailed for fraud.

But as the Sunday Star-Times acknowledged, the My Kitchen Rules contestant's adult photo shoot wasn’t illegal. The contestant said it was a one-off, seven years ago when she was short of money and that wasn't disputed in any of the stories about her "secret shame".

The New Zealand Herald’s website picked up the story from its rivals the same day and ran it like this:

Pretty, Petite My Kitchen Rules contestant has a “sexy secret”

Of course, the one thing the My Kitchen Rules contestant definitely doesn’t have is a secret, thanks to the country’s two major newspapers publishers out-doing social media in the slut-shaming stakes.

And there was more. After the woman and her sister were eliminated from My Kitchen Rules last Tuesday, The New Zealand Herald said the disclosure had hurt the woman's chances.

A story about her racy past being brought up seven years after the fact has been "the worst possible thing" for one half of the Remuera sisters duo.

She aimed this message at her readers:

The responsibility is on the rest of us to think about what we put online and what we click on.

True enough. But it's not just the readers of the papers who need to think about why they should be sharing the so-called "sexy secrets" from people's past just because they can.