The owner of the New Zealand Herald, Newstalk ZB and Radio Sport has confirmed it will soon move its journalists into a single newsroom where they will operate in all media around the clock. NZME says 15 people will be made redundant as a result. Mediawatch spoke to managing editor Shayne Currie in Singapore, en route to the World Cup final. 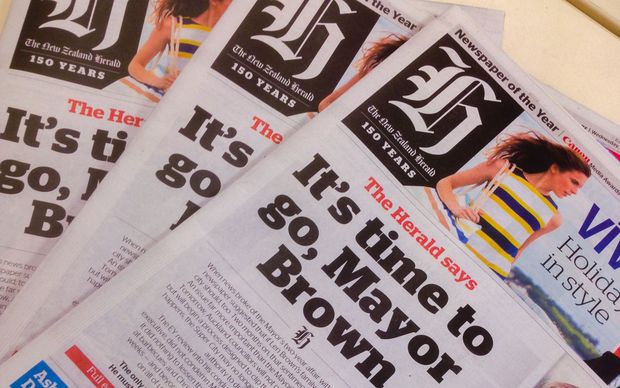 One of New Zealand’s biggest media companies has confirmed it is going ahead with a new multi-media newsroom in Auckland. NZME will be moving its journalists into what the company calls "one integrated, multi-platform, 24/7 operation" by the end of this year.

It means about 250 journalists now assigned to newspapers, online and radio news will be working across all three media and producing stories in text, audio and video. NZME says it’s all about giving the people what they want in the digital era, with more and more people getting their news online and on mobile devices.

But it is also a fundamental shift in working practice. When the move was first proposed in September, NZME chief executive Jane Hastings said in a statement this would "not impact on individual brands” which would "retain their unique perspective and tone".

She wouldn't say more to Mediawatch while negotiating with staff affected by the move, but Jane Hastings revealed some details at a media conference in Sydney in September.

“It’s all about content. Our content hubs are news, sport, entertainment, business and lifestyle - and we’ve got new leaders for those areas,” Jane Hastings told the Future Forum. "The heartbeat of the newsroom that we’re moving to is 7 minutes, 30 minutes, 24 hours: 7 minutes for digital, 30 minutes for radio and 24 hours for the paper the next day".

When asked if staff supported the move, Jane Hastings also told the Future Fourm: "I would say that we've got 50 per cent on board, and 50 per cent who are not on board. But we're really clear on where we're heading and we're inviting people to sign up."

"If they don't want to sign up, there's a big shiny bus outside. It's heading in a different direction and we wish them all the best. But we're inviting people in. We want people there because they want be there and they believe in it," she added.

The new NZME newsroom will be led by managing editor Shayne Currie, who’s also in charge at the New Zealand Herald. On Friday he confirmed there would be “about 15 redundancies.” He also confirmed new editors for sport and business news, and that new writers will be joining NZME: author and contrarian Alan Duff, comedian Raybon Kan and singer Lizzie Marvelly, who has her own media outlet targeting young women, Villainesse.com.

At the time of the announcement Shayne Currie was on his way to London for the World Cup Final. Mediawatch called him en route in Singapore.

“We want our newsroom to be able to respond to the demands of the audience, which consumes news on different platforms," Shayne Currie told Mediawatch.

He says it doesn’t mean that one journalist will a news cover a story for the web, the paper and the radio where once journalists specialising in each medium could all give a story coverage.

“We want our journalists to be proficient on at least two platforms, but we don’t expect them to file a radio story, then write a longform piece and a video in one fell swoop,” said Shayne Currie.

“There are different heartbeats in a newsroom now. But not all our journalists will be serving deadlines as short as seven minutes. We will try to build the content we have that’s unique – that others can’t copy”.

In recent years, NZME has aggressively pursued branded and sponsored content - stories created for advertisers but published alongside other news and information created by journalists. At the Future Forum in Sydney in September, NZME chief executive Jane Hastings described new questions that would arise in the editorial process in future:

Is that a story that needs to be expressed in print? How is it going to be amplified online? Actually, is there an event idea around here? What’s our social strategy? Is there a native [advertising] opportunity across this?

Does that mean the newly-integrated news operation will be responding to commercial opportunities identified by the sales and marketing side of the business? And that topics and events of interest to potential advertisers will get more attention?

"The executives are more tuned in to new business opportunities," said Shayne Currie, "but the journalists are there to cover stories. The independence of the newsroom remains. Every media company in the world is looking at new revenue streams. Branded content is one of those, but it won’t affect our journalists on the frontline”.