Scouting for gossip and clicks

A controversial journalist has returned at the helm of an online project promising gossip and showbiz news. Mediawatch looks at Scout’s first week, and finds it promoting in-house brands and personalities, while also targeting a rival with a takedown. 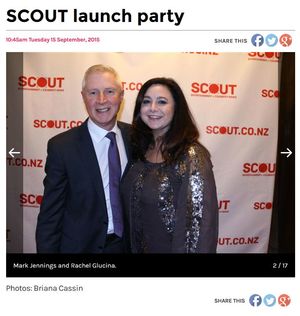 When New Zealand Herald gossip and showbiz writer Rachel Glucina announced on Twitter last June that  Mediaworks had "headhunted" her, many in the media were surprised. She'd just been accused of a serious breach of ethics to secure a 'Ponytailgate' scoop, and soon after The Press Council ruled "elements of subterfuge" had been used and a significant conflict of interest had not been managed.

This dented the reputation of the Herald, which had brought her gossip writing from the back of the Herald on Sunday into the main daily paper and its website. After her hiring, TV3's news chief Mark Jennings reportedly promised his journalists Rachel Glucina would never set foot in their newsroom.

But the chief executive at Mediaworks, Mark Weldon, didn't want Rachel Glucina for the newsroom. He wanted an entertainment website to be run as a joint venture.

Digital entertainment brands featuring snackable, shareable content  - especially video - are the fastest growing part of the media landscape, and there is a gap in the New Zealand market in this area"

The plan was for Scout to feed entertainment news into Mediawork's programmes on TV and radio. It's already providing 60 seconds of showbiz news before the evening news on TV3, and 3 News political editor Patrick Gower and Story host Duncan Garner will also be contributors. Clearly, Mediaworks is not worried about linking Scout with its journalism.

Mediaworks and its stars were once frequent subjects of Rachel Glucina’s stories for the Herald. Would the opposite apply now that she has switched?

I am independent. I don't think anyone would take it seriously if (Scout) was a PR platform for Mediaworks.

But its first video 'exclusive' targeted a high profile personality for two key commercial rivals of Mediaworks: TVNZ and NZME broadcaster Mike Hosking. Scout followed, filmed and photographed the "multi-millionaire motor-mouth" and his sports car, and posted an unflattering picture of him jogging with his partner. The story was slugged: Mike Hosking and his Ferrari cleaning fetish with a dust buster.

It was also no coincidence that Scout’s launch day also featured one Mediaworks presenter Duncan Garner “facing his fears” and challenging TV3’s Patrick Gower to do the same. News value? None. Entertainment value? A little. Promotional value for in-house brands? That’s the idea . . .

Most critics were unimpressed. After day one Nick Grant of The NBR said:

National MP Judith Collins was quick to congratulate her friend Rachel Glucina on her new job back in June.

In a profile on day two, Scout said Judith Collins appeared stronger after a terrible year in which her conduct was criticised and investigated.

What hurt most were the attacks on her family. She said there is an unwritten rule of not mentioning politician’s families, learned by both journalists and MPs, which “some people ignore”.

But one of those ignoring that “rule” in 2014 was Judith Collins herself.  During the Oravida controversy she named a TVNZ reporter who she claimed had asked for help getting a police job for her partner. Judith Collins later backtracked and apologised. Worth a mention you’d think in a profile of a politician voicing concern about personal attacks on politicians from the press . . .

Scout’s profile ended with this thought:

Now we just need to figure out whether or not we should fear her.

She clearly has little to fear from this new media outlet.

Scout also named Max Key as "the most influential New Zealander under 25" ahead of the likes of Lorde, Steven Adams and Brodie Retallick. On Wednesday, Scout hailed Max Key's business acumen - and his baseball skills - in a separate story about him joining a company that seeks to help New Zealanders get into top universities overseas.

Other news outlets carried the story too, including the Herald, under the headline:

Max Key: "I’ll get you into Harvard”

Max Key never actually said that in the Herald’s story, but this is the big problem for Scout.

Established news sites are already bulked up with stories about the rich and famous, and they are happily harvesting the clicks. Women's magazines have bigger chequebooks and strong relationships with big local showbiz names people are interested in.

Purely tabloid content hasn’t really sustained a successful media title for decades, since the heyday of newspapers like Truth, the 8 O'Clock and Sunday News.