Will we have the information we need in 2030?

A new project backed by six public organisations is asking whether New Zealanders will have enough information for society to succeed in the near future. What is it they're worried about? What's the media's role in this? Mediawatch attends the first gathering of the Civics and Media Project to find out - and highlights recent claims we are already in 'a post mainstream media era'. 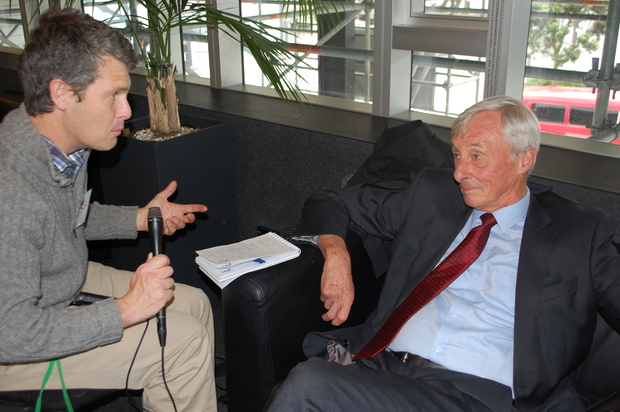 The good news is . . . New Zealand ranks highly on measures such as transparency, media freedom and civic engagement. So says a discussion paper put out by The Civics and Media Project, a new initiative backed by Victoria University, the University of Auckland, the Royal Society of New Zealand, the McGuinness Institute, NZ On Air and the Ministry for Culture and Heritage.

But the bad news is . . . we're slipping, according to the keynote speaker at the first gathering of the Civics And Media Project in Wellington this week.

"We need to find out why. And what to do about it," warned Professor John Burrows.

He knows a thing or two about civic engagement. He's currently the chair of the Flag Consideration Panel, and formerly a law commissioner who led a review of our constitutional arrangements in 2013.

The CAMP paper says "news and information are the fuel for the engine of a well-functioning society" and the news media are a key part of the answer to the big question it has posed: "Will citizens and communities have the news and information they need and want in 2030?"

But just like the population, the news media are changing fast.

Former New Zealand Herald editor-in-chief Gavin Ellis told the gathering we can't take it for granted that the news and information the media give us today will be available in fifteen years' time. Our big news media companies are currently struggling to preserve their profits in the face of competition online, and publishing news and information has become a smaller part of their business.

The company that now owns his former paper, the New Zealand Herald, is  NZME, which stands for New Zealand Media and Entertainment.

The major media companies here are all owned offshore, he added, with financial institutions having a large and growing stake in most of them. "The civic duty to inform New Zealanders, naturally enough, isn't a priority for them, he says".

The Civics and Media Project is modelled in part on a report by the US Federal Communications Commission in 2010 which identified problems in the US which have echoes here today.

"Gaps created by the contraction of newspapers have—so far—not been fully filled by other media. Some local TV news shows are investing more in reporting about critical local issues, but many are not. And some are exhibiting alarming tendencies to allow advertisers to dictate content). Commercial radio, cable and satellite play a small and likely declining role in local news".

The FCC report made some bold recommendations to support local-level news media (pdf) such as tax breaks for media companies and even subsidies and advertising support.  Gavin Ellis told Mediawatch it's time government agancies here stared thinking of interventions to safeguard the news media's future.

Brevity is a thing

While Professor Burrows has been in the firing line of the news media lately, thanks to the flag debate, he's spent much of his professional life watching the media from the sidelines, and the impact of technology. He is the country's pre-eminent expert on media law, and led a major review of media regulation for the digital age.

That was well reported by the media at the time, but the review of our constitutional arrangements - scarcely less significant than a new flag - made hardly any headlines at all.

The lack of interest in that, he says, helped him understand that "boring is bad" for our modern media. More and more, news and information has to be "interesting and fun". And today, the news media and social media are all available at the same time on the same screen.

It was no accident that that PM John Key launched the flag referendum first on social media, says Professor Burrows, and that's where the debate about it turned out to be the most vigourous. By contrast, hardly anyone turned up to public meetings with his Flag Consideration Panel.

Professor Burrows summed up the influence of social media this way: "Brevity is a thing".

What next for the project?

Organisers want to ensure it's not just a talking shop where media people and academics express concern and  discuss theories. Workshop 2 will be hosted by the University of Auckland in October and will examine what a well-informed society could look like in 2030. Workshop 3 will be hosted by the Royal Society and McGuinness Institute in November and this will look at what individuals, communities, business and government can do.

They hope to emerge with a plan to combat a decline in civic engagement which could become in bigger concern in the years ahead.