The paper that sold its own town to prove it exists

Last week, the local paper in Whitianga sold the town on Trade Me for $32 to draw attention to the fact that people there can’t list it as home when buying and selling on the site. A campaign in The Mercury Bay Informer prompted the online auction company to act, showing the power of a proper local paper going into bat for it readers.

Dunedin-based publisher Allied Press announced this week that one of the South Island’s most enduring newspapers will soon no longer be a daily. From the 11th of September, The Oamaru Mail will be a free weekly paper instead.

But that doesn't necessarily mean it will be a paper without clout in its community.

This past week, one free local weekly has scored a small win over the big name in online auctions in New Zealand.

For years it irritated people in Whitianga that they couldn't give their town as their location on Trade Me. Even though it has a substantial population, they had to opt for other places nearby categorised as ‘Waikato’ - such as Whangamata, Thames or Coromandel. Their online profile told buyers that they were there, and not in Whitianga.

To make a point, the chief reporter of the local paper The Mercury Bay Informer sold Whitianga on Trade Me for just $32. 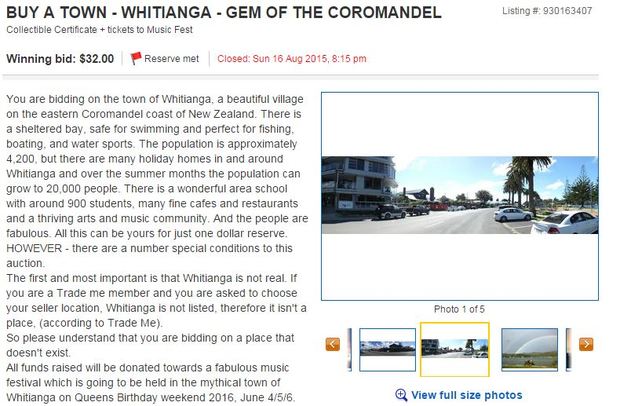 Whitianga 'for sale' on Trade Me. Photo: screen shot

However, there were special conditions attached to the sale:

The first and most important is . . . Whitianga is not real. If you are a Trade Me member and you are asked to choose your seller location, Whitianga is not listed, therefore it isn't a place, according to Trade Me. So please understand  . . . you are bidding on a place that doesn't exist.

The next issue of The Informer said its chief reporter Len Salt had been nagging Trade Me for two years to add Whitianga to its list of towns, but to no avail.

The most recent answer we had was a very friendly reply last year: "Right now a big focus is sorting out the crazy array of categories for fashion listings to make it easier to find what you want.” Thanks. Nice to know that T-shirts and silk garments take priority over ensuring that a town the size of Whitianga actually exists.

In an open letter to Trade Me, editor Stephan Bosman pointed out that Whitianga is featured every night on TVNZ's news weather map. And not only does it have a permanent population of more than 4,200 people  - which swells to more than 15,000 in summer - millions of dollars worth of real estate, cars, boats, marina berths, businesses and other property are listed on Trade Me at any given time. 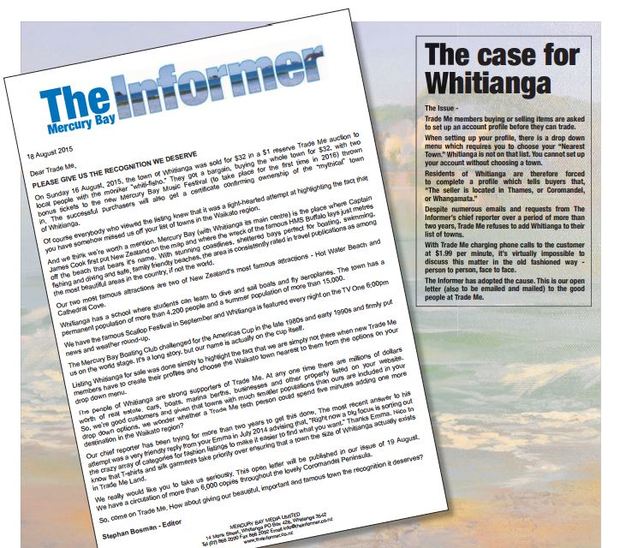 The Informer's open letter to Trade Me Photo: screen shot

That did the trick. The day after it was published in the Informer, Stephan Bosman received this from Trade Me:

We have been slow off the mark to add Whitianga to Trade Me as a selectable region, and we’re sorry this has made the townsfolk feel left out. We agree it should make the grade. 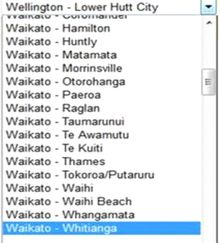 And now it has.

Within a week, Trade Me added Whitianga to its list of locations and Stephan Bosman says his paper hopes Trade Me people will visit so he can return the favour.

"We'll put them up for a couple of nights, thrown in dinner at a good restaurant and charter a boat to take them out show them the ropes of fishing in our part of the world.

As a scoop, it may not be Watergate, but it certainly shows a small local paper going in to bat for its readers can get a big business to take notice. 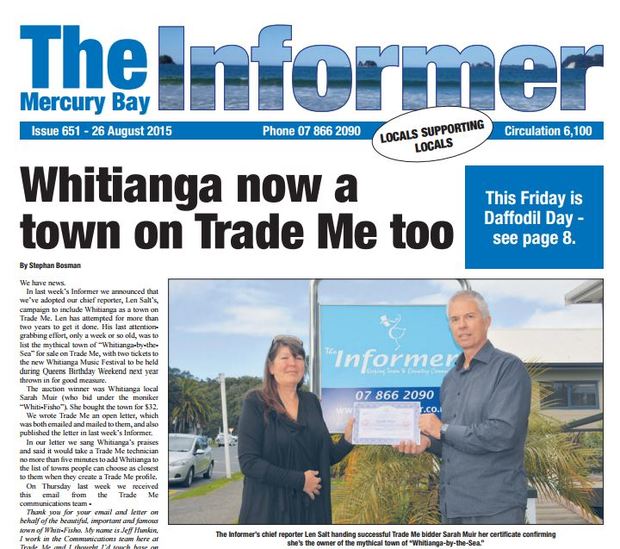