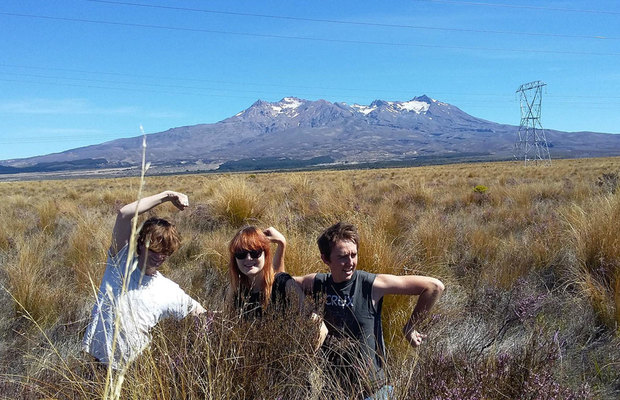 Name of project: Unsanitary Napkin
Real names: Hannah Salmon, Rupert Hunter, Ben Knight
Age (of project): 1 year
Hometown: Wellington
Associated acts: Rogernomix, All Seeing Hand, Downer Buzz, Bent Folk, Teen Hygiene, Daily Secretion
Formative musical experience:
Rupert - I don’t know! My dad loves music, and when I was a little kid I really liked Little Richard, “Boom Boom” by John Lee Hooker, and the punk-rock Popeye the Sailor Man from Saturday Morning: Cartoons’ Greatest Hits. I once asked my parents to make me a bowl of spinach for breakfast, because I was convinced it actually gave you big muscles and short bursts of super-strength. “Tutti Frutti” by Little Richard was on. I ate the whole bowl of spinach, then jumped on my dad and tried to wrestle him.
Hannah - I don’t know either. There were so many influential bands/musicians, some good, some terrible. Both my mum and dad were into music, albeit very different music. My mum would listen to Prince (although it was later “Emancipation” era Prince, the sexual nature of which made me feel weird), and Aretha Franklin, and Tom Waits, and 70s “jazz rock” like Steely Dan (for whom I have a soft spot - see Musical Guilty Pleasure). I also remember staying at my dad’s place in Dunedin and his partner at the time would play the Tank Girl soundtrack. That’s when I first heard Devo’s “Girl U Want”, an experience I treasure to this day. It’s also when I first heard L7, which I thought was the heaviest shit ever. There was a lot of shit between then and now, but I think those were pretty formative experiences for me.
Ben - My parents never had a stereo when I was growing up so I would listen to a radio station in Dunedin called “93 Rox” through a clock radio. When my older brother saved up for a boombox with a tape deck when I was 12, I started taping songs off the radio and made myself a mix-tape. It was mostly songs from the Ren and Stimpy soundtrack and some Ace of Base, but also had two songs, “Roots Radicals” and “Ruby Soho”, by Rancid. Despite it being cruddy California pop punk with a fake British accent, I was captivated, and when the internet happened, one of the first things I looked up on Alta Vista was “punk music”, and I never escaped its clutches.
Musical Guilty Pleasure:
Hannah - There are loads but I’m gonna go with Steely Dan.
Rupert - I’m from a Protestant background, so I think I have shameful pleasures. I feel ashamed about a lot of music I liked as a teenager. After reading Mötley Crüe’s book I stopped wanting to listen to music by guys like them. I listen to my own music a lot, and feel ashamed about enjoying it. Doubly so if I’m caught in the act.
Ben - Revisiting my formative musical experience (see above). And Dennis Marsh.