The drug courts on trial

The Alcohol and Other Drugs Treatment Court has been run as a pilot for the past 6 years, to see if funnelling drug-addicted criminals away from prison and into intensive rehabilitation can stop their re-offending long term. Insight's senior specialist reporter, Teresa Cowie visited the Drug Court in Auckland to find out how it works, and if it's worth the money to keep it going? 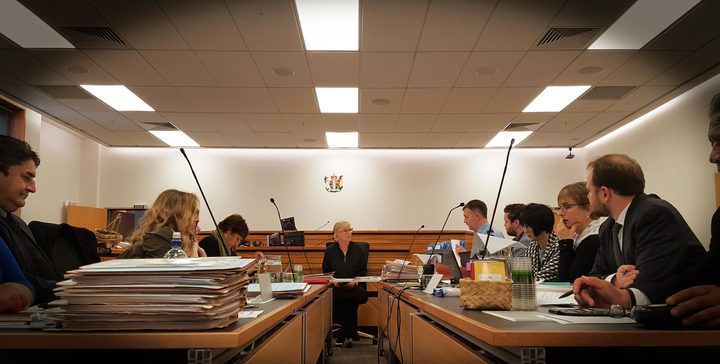 Mike* has spent more than half his life going in and out of prison.

He has not kept track of his long list of offences but what he does know is that they all happened either while he was on drugs, while he trying to sell them, or because he was trying to get hold of more.

Now 39, and like so many who have passed in front of the judges at the drug court, jail was no deterrent to him, it was simply part of life.

"All the jail time I've done, it was normal to me, I could go there and get back into my routine - porridge in the morning, training in the afternoon, jail was nothing to me."

The drug court pilot is aimed at a hardcore of repeat offenders, whose crime is driven by their alcohol and drug addiction.

It costs about $5.8 million a year to run, which is about $5m more than if offenders went through the regular court, but the extra cost is largely offset by what would have been spent keeping the offenders in prison.

Initial figures from the courts' judges suggest it's so far saved about $16m by keeping people out of jail.

Gently spoken and neatly dressed in brand new clothes and box-fresh suede boots for his court graduation ceremony, Mike described the first day of each trip back to prison like a homecoming: Most of the men from his family and many of the mates he grew up with in Otara were in there.

"My Dad's brothers were in there, my cousins...and when I walked out of my cell in jail, my uncle was there [and called], 'Hey Neph', my other uncle was there, 'Hey nephew', my cousins were there, 'hey cuzzie'."

But the last time Mike heard this roll call of greetings from his family in prison, something changed.

"I'm looking around and I’m thinking, 'F*** is this actually gonna be my life forever?' "

Mike's graduating from the court after successfully completing 18 months of intensive treatment and getting himself a job. But it was not straight forward.

That realisation he had about the rest of his life came after his first stint in the drug court saw him being kicked out for trying to cheat a drug test.

By his own admission, he was not ready. Back then, he saw the drug court as an easy option that could cut out prison time and get him back to partying and crime sooner.

Mike started writing letters to the judge and over time managed to prove he really was ready to change. 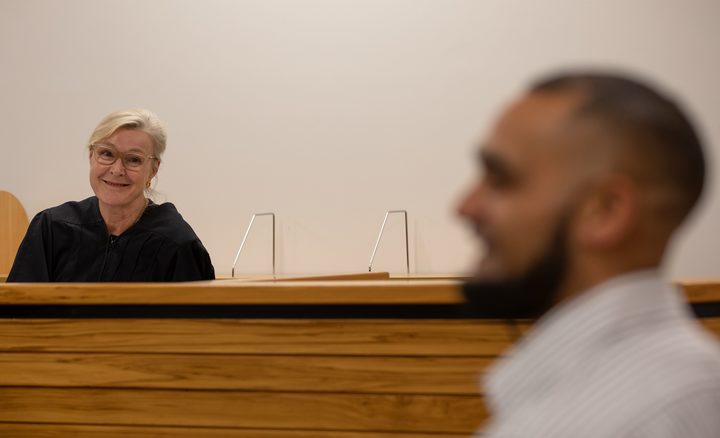 At the end of his time in court, he avoided being sentenced to prison. He was determined to build a relationship with his children, who missed out on getting to know their dad, because he was always locked up or chasing the next hit.

"Now I'll be there [for my family]. I would never have changed without the drug court, because crime is so deeply ingrained in me."

The Alcohol and Other Drug Treatment Court was started by Judge Ema Aitken, based in central Auckland, and Judge Lisa Tremewan in Waitākere.

There is no defended hearing for the offender. To get in, they have to plead guilty to their crime and show their offending is driven by alcohol or drug dependency.

They also must be facing a sentence of three years or less, and it cannot be one that involves serious violence, sexual offending or arson.

And importantly, they have to convince the court they are ready to make a permanent change to their lives.

But the sentence they would be serving is always hanging over them - if they consistently relapse, fail to meet their rehab commitments or reoffend, it is back inside. 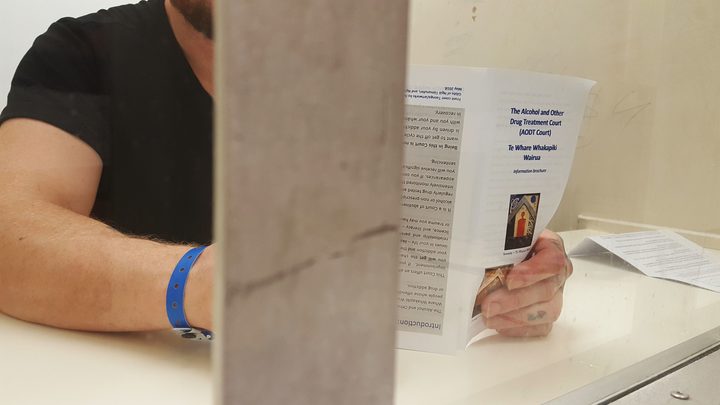 A drug court applicant in the holding cells looks over a leaflet about the court before his appearance Photo: RNZ Insight/Teresa Cowie

"You start to see the same faces coming back before you, and you start to ask yourself as a judge, ‘Is this how I am going to spend the rest of my judicial career? Imprisoning people over and over again?’ "

The court does not just look at what the offender (or participant as they are known in the drug court) has done, but also why they did it, Judge Aitken said. 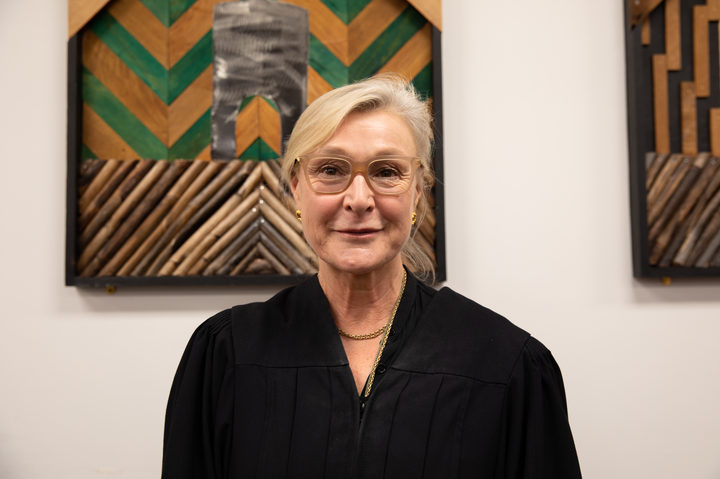 She said drug court was no get out of jail free card.

A treatment plan for each participant is set by the judge, case managers, lawyers and peer support workers; commitments to rehabilitation, counselling, frequent drug-testing, community service and making amends with their victims is full time work.

Drug court - I'm doing it for my children

Karen* is in the drug court.

She is a mother of four children who are 13, nine, eight, and six. She is serving her sentence of home detention from her mother's townhouse in a smart central suburb in Auckland.

It is early afternoon, the children are at school and her public servant mother is at work.

The shutters on the windows are tilted down, blocking any attempt by the weak spring sun to light the living room. 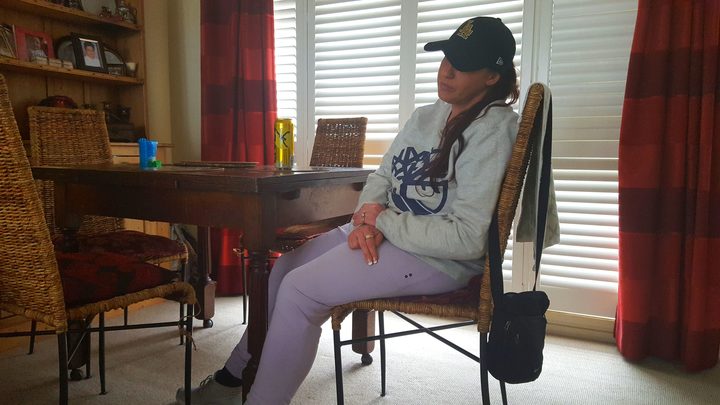 It looks like a lonely existence, with the others out of the house for the day.

The only company is a cat.

She cut herself off from all her partying friends, but she said she was too bothered by that.

She made new friends in the court, who are on the same path as her.

Karen first got into crime when she was a child. Now, 40, and despite decades of alcohol, drugs and crime she has never been inside.

"The first time I stole something I was eight years old, and I was with my own father, and he made me try some track pants on...and he told me to just put my pants on over the top and walk out with them."

But now it is crunch time: She was convicted seven times for driving under the influence and would be in prison by now, if her Mum had not found out about the drug courts.

"At first I was stubborn as...I thought I may as well just go in, do a lag and get it over and done with".

But her main motivation is her children.

"I feel really happy that I've had the opportunity… I feel really positive that my children have a good Mum, now that I'm able to be there for them and not worry about myself all the time, because I feel like it’s a really selfish thing, addiction."

In the nearly six years the court has been running, 495 people have been accepted into it - with 40 percent making it through to graduation.

Evaluations of the court so far show it has reduced reoffending by about 14 percent.

Karen said there was no way she would be going back to her old lifestyle. She had moved on and had the tools to deal with the triggers that could send her back that way.

A decision on whether to make the drug courts a permanent part of the justice system is due in the first half of next year.

*Some names have been changed to protect people's identity