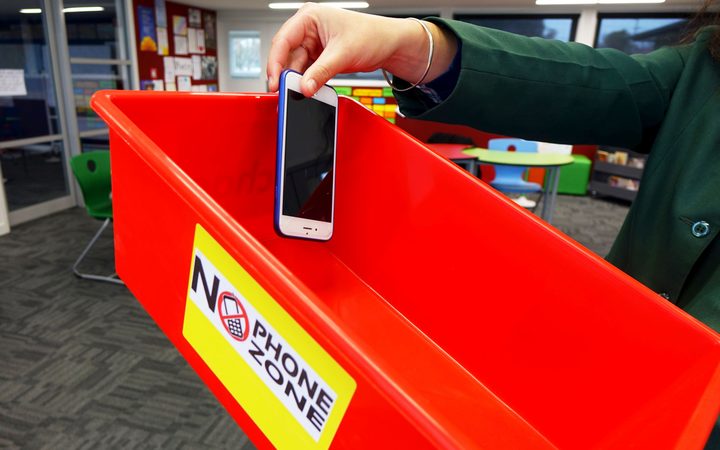 Mobile phones in schools are being accused of derailing learning and causing bitter squabbles between teachers and students as they try to police every ding, vibration and social media notification. When students in France return to school after the northern Summer break phones will be banned in their school by law. Insight's reporter Teresa Cowie has been asking students here what they think about phone bans. 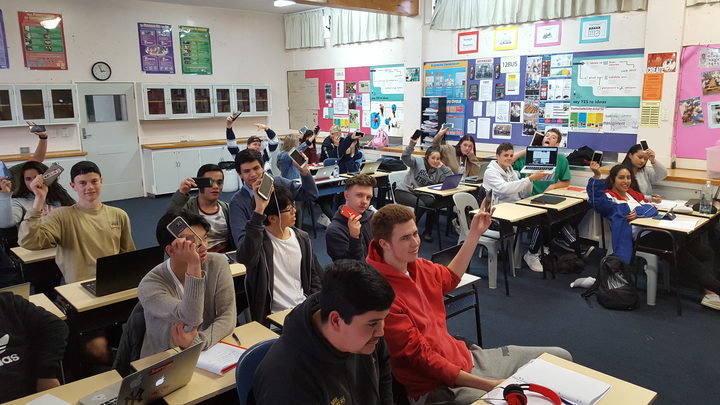 Who's got their phone in class? Pakuranga College students are leading the way on minimising distraction in class Photo: RNZ Insight/Teresa Cowie

It would be a struggle to find a high school student who thinks a total ban on mobile phones at school is a good idea. Insight did manage to find one or two outliers, but most students wanted to keep a firm grip on their phones while inside the school gate.

Many parents will be delighted to know that their teens actually do still like them, as overwhelmingly the main reason offered for hanging on to their pocket heroes was "I need it so I can contact Mum and Dad". Although this was usually followed by "...to come and pick me up".

But while the concept of a nationwide, French-style ban, didn't appeal, many students did think some boundaries at school were necessary, a good idea even.

Pakuranga College in Auckland was one of four schools Insight visited to explore policies they are trying out, and there the idea of a phone ban has been rejected.

The school felt the distraction phones bring would always be in their lives, as they progressed through school, into tertiary education and the workplace. Now, the school said, was the best chance students had of getting an education in how to manage that distraction.

At the school it is the students (not just the teachers) who are leading the way on making the most of technology in the classroom.

They were also charged with finding ways to get students to self-regulate their phone addictions and the College had established a Student-run Digital leadership Council to keep everything on track. 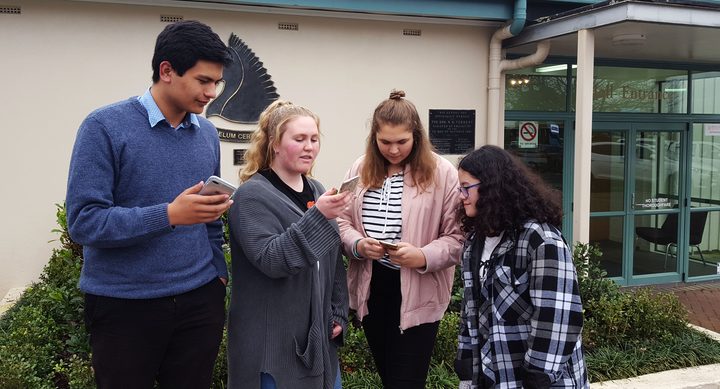 "It's a good and bad thing to ban it. Personally I believe you should be allowed phones in schools, but it should be moderated and limited to how much you can use it in the classroom."

Sarisha Claassen, 17, a Year 12 member of the digital council said phones could be helpful in class though.

"I don't think they should ban phones, I think they're a useful learning tool. I know in class we mostly use laptops, but sometimes if you need to take a quick picture of something on the whiteboard, it's quite handy".

"I think it's just learning about controlling the students and the distractions," she said. 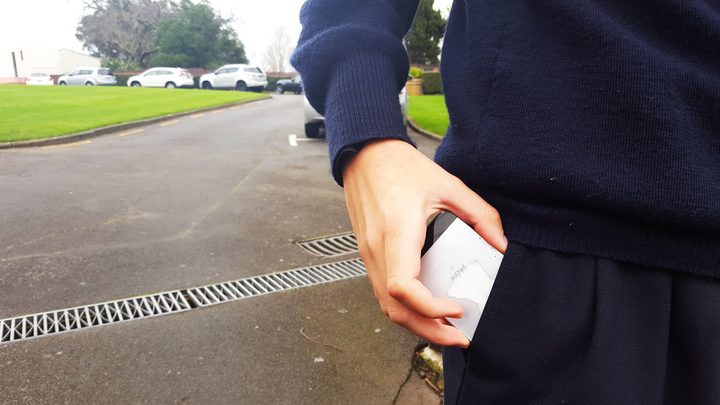 Research published in the Harvard Business Review earlier this year suggests the distraction mobile phones cause was immense.

The results showed that people taking part in an experiment who worked on mathematical tasks while their phones were in another room, performed the best, followed by those who left their phones in their pockets.

People whose phones were (face-down) on their desks did the worst, its research described the impairment to their cognitive capacity - as being "on par with effects of lacking sleep".

Katelyn Vargas said getting the message across about how distracting phones were was a struggle.

"It is very hard to prevent, because we're only a few people against a sea of many.

"It's like talking to a wall, in this day and age mobile phones are the centre of everything and getting that message through is very, very hard because we've grown-up with it like this."

Pakuranga College does have some subtle restrictions in place.

Each day students can choose only one device to log into the school online learning systems. Most students choose their laptops, because they are the most practical device to do school work on. This means they cannot access the school wifi if they want to use their phones and will have to use and pay for their own data. Most of the young people preferred not to use their data, so the system self-limits phone use - to a point.

The Digital Leadership Council is not just focused on phones though, it's working on a full programme to get students to be better digital citizens.

It is also teaching the teachers, to keep them up to date with what students are doing on their phones and how the devices can be better used for learning. 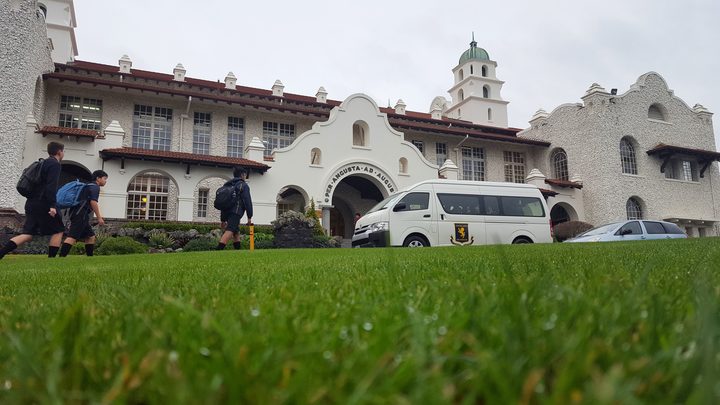 Across town at Auckland Grammar where its school motto is Per Angusta Ad Augusta; Through difficulties to greatness, the more than 2000 boys who attend the school have to battle through the entire day without using their phones. The school is solidly convinced that having class time interrupted by constant social media notifications will not lead to any sort of greatness when it comes to them getting a good education.

The school policy is that a phone could be brought to school, but once the boys passed through the vine-entangled archway at its entrance, the devices go in their bags for the rest of the day.

If a boy is caught using their phone it's confiscated for a week, and their parents had to come and collect it from the school office. 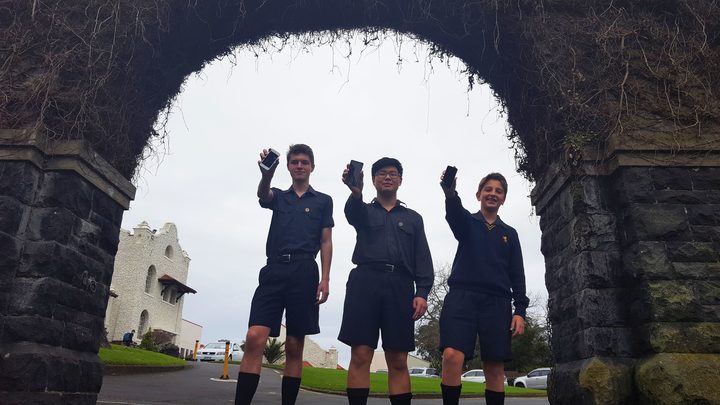 Form 7 student and Head Prefect Felix Marcon-Swadel said if the school had a more liberal policy, he would struggle to manage the distraction.

"I'd like the say I would be extremely disciplined, but that's probably not what would happen. At least some of the time I would end up using my phone for personal use."

He recently used an app to track how much time he was spending on his phone.

He admitted it wasn't all worthy activities, like organising the prefects, either.

"I'm always a little bit shocked about how much time I spend on my phone, so I do appreciate at Grammar, sort of having forced time away."

Giving students that enforced time away from curating their social media pages was one of the ideas behind France's nationwide ban of phones in schools.

President Emmanuel Macron made an election promise over the phones ban, with his government pushing forward the idea that young people needed the legal "right to disconnect" from the pressures of digital life during the school day. 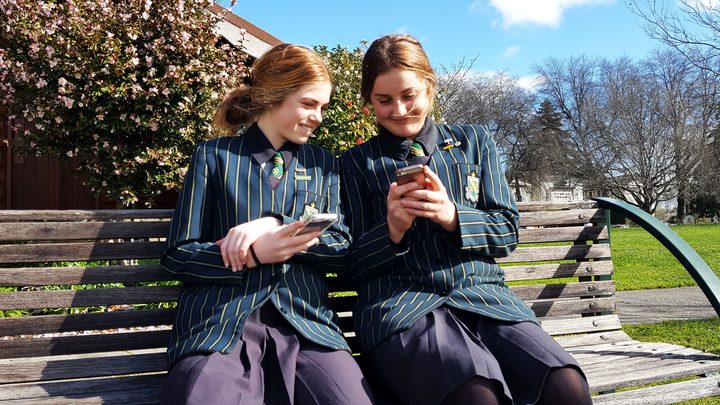 At St Matthew's Collegiate, a girls' day and boarding school in Wairarapa, students are allowed phones but there are heavy firewall restrictions and extra technology to limit access is coming next term.

The girls said the firewalls meant they could see notifications on their phones that there were new posts on their social media, but they couldn't access the post, which led to some serious FOMO (Fear of Missing Out).

Year 10 Student Marguerite Hood,14, said the new restrictions would be good, but in some ways a total ban would be easier.

"I feel like they should just take our phones off us in class, put them in a box as soon as we walk in the door."

One area the school has imposed a ban on phones and laptops is in the boarding house, after lights out.

The school was finding girls were staying on their phones into the night and arriving to class red-eyed.

She thought the boarding house phone ban from 9pm was a good idea.

"I think handing our phones in over night is important because otherwise I probably wouldn't sleep and I would be quite distracted by talking to other people and stuff."

Laura is starting NCEA next year and she hoped she would get a bit more time to use her laptop for finishing assignments.

As far as a nationwide ban on phones in New Zealand goes, the Secondary Principal's Association said urging all New Zealand schools to ban mobiles in the way France had would be wrong and impractical.

It said it supported the right for individual schools to manage mobile phone use in a way that worked for their teachers, students and parents.