In the decade since the Recognised Seasonal Employer (RSE) scheme was introduced, the number of seasonal workers coming to New Zealand from the Pacific has doubled, and it is set to continue growing.

The programme to allow growers to recruit labourers from offshore for a fixed period of time - to pack, maintain, harvest and pick crops - launched 10 years ago in April. Initially the number of visiting workers was capped at 5000 but this season that number has grown to 10,500.

However, as demand increases so do fears about how temporary workers from overseas are being treated. 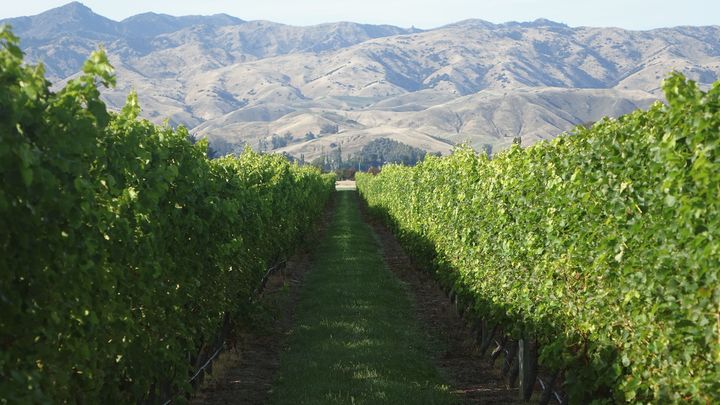 In Marlborough - home to roughly two-thirds of the wine grapes grown in New Zealand, where 75 percent of work on the vines is done by labourers brought in under the RSE - the majority of workers come from Vanuatu.

Given rather limited social opportunities, a group usually turns up to the free mid-week community dinner offered by a drop-in centre in the middle of Blenheim.

Centre manager Janette Walker has spent large parts of the day getting the meal ready. As a former farmer she is used to feeding big numbers of workers and lines up next to other volunteers to dole out sausage casserole, stir-fried vegetables and fruit crumble.

The queue snakes from the kitchen to the front door, and the room is full of busy noise as dozens of people - including the homeless, struggling families and retired people - line up to fill their plates. They then find a table and a spare plastic chair before sitting down to eat and have a chat. 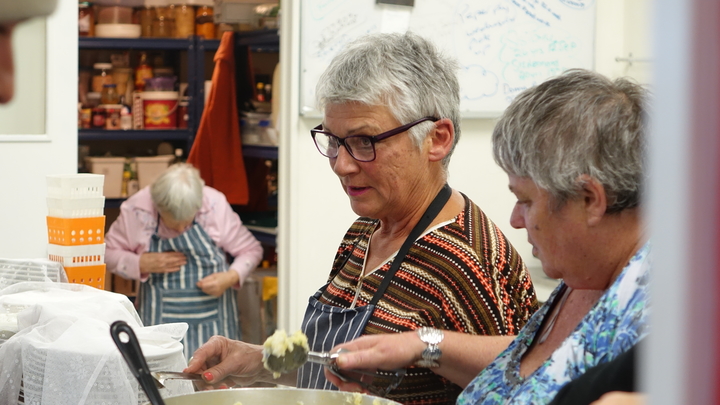 Over the weeks, as they tuck into dinner, workers have shared stories of their life in New Zealand, and Ms Walker  says the tales have left her worried.

"They need to earn a decent wage. It is difficult to come here. They are away from their families, they are working incredibly hard and they need to get a fair day's pay for a fair day's work."

But it appears that sometimes these workers don't get that fair day's pay.

With the wine industry doing well, Ms Walker says she thinks something is wrong if workers are taking home less in 2017 than they did in 2008.

In one case she was told of a person taking home $200 for a six-day week, after deductions for items such as rent for their shared accommodation, and transport. 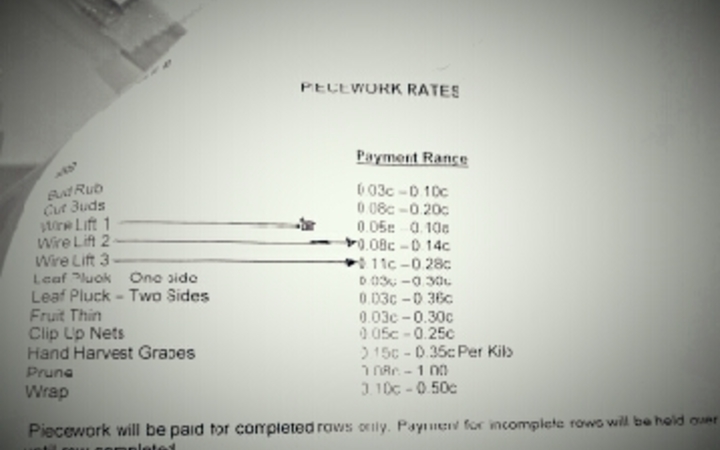 An example of payments for vineyard work Photo: SUPPLIED

Ms Walker, who was a farmer in a previous life, says such unfair working conditions would not have passed muster with her employees back then.

"Shearers would have walked off the job if they'd been told the price per sheep was dropping because they were working too fast."

Most of those working in Marlborough are out in the fields doing jobs such as pruning, leaf thinning or hand picking and they are paid on a 'piece rate' or per job on each plant.

Ms Walker says she suspects some contractors have been sliding the piece rate down to make sure that no matter how fast workers moved up and down the row, their pay stayed on, or close to, minimum wage.

Henry* is one of the Vanuatu workers who felt he had been short-changed. Self-effacing and quietly spoken, he regards the opportunity to earn cash by doing seasonal work in New Zealand as a privilege.

He was able to build a modest house back home and wants to extend it so that the girls and boys in his family would have separate rooms, but despite working as hard as he had done in previous years, his weekly pay this season is down.

"My expectation is for $3000 to $4000 this season to take back to Vanuatu to do other things for my kids," he said, but the actual pay packet has fallen far short of that.

Henry describes his fellow workers as shy, and says it is hard for them to complain.

The process for any complaints is for workers to go to their employers first, and then officials at Immigration NZ or the Labour Inspectorate.

There is no labour inspector based in Blenheim and Ms Walker, who is standing as a Labour candidate in the next general election, says the Labour Inspectorate has limited interest in checking on anything other than ensuring the basic 30 hours at the minimum wage. 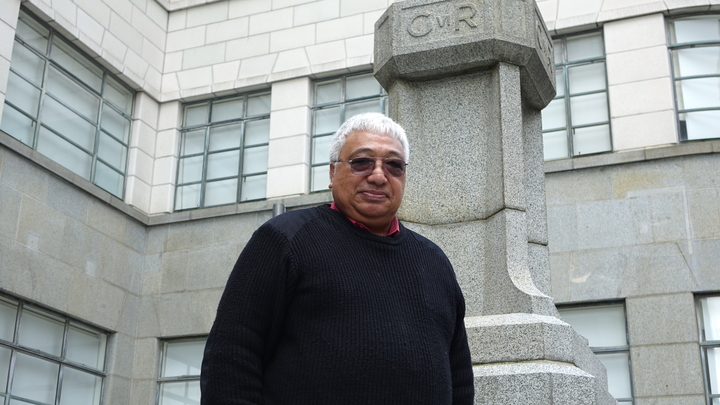 Immigration NZ RSE manager George Rarere says workers are given a great deal of information about who to turn to and numbers to call in the event of any issues.

When asked about the use of varying piece rates to keep pay at low levels, the Labour Inspectorate said it investigated breaches of minimum employment standards, but would not go into any detail in an interview and passed further questions back to Immigration NZ. 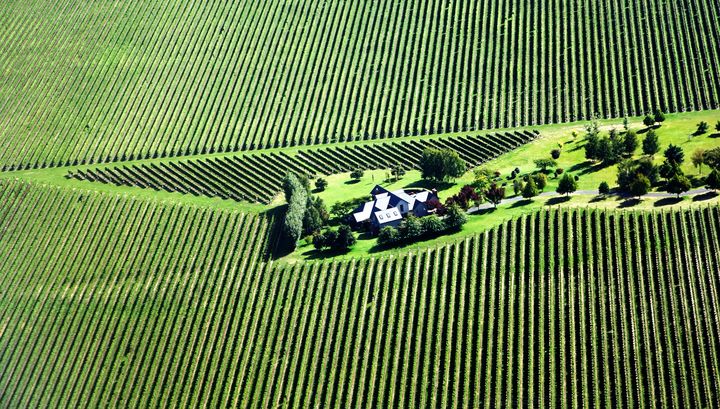 The demand for seasonal workers is expected to grow as viticulture and horticulture boom. Photo: RNZ/Philippa Tolley

Marcus Pickens is the general manager of Wine Marlborough, which markets the region for the Wine Growers Association. Given the importance of reputation in the business, he acknowledged its reputation could suffer if poor work practices were discovered. He was confident the systems in place were enough for now, he said.

However, the organisation has predicted strong growth of 25 percent in the next five years - and that burgeoning demand for workers is likely to be shared by the horticulture industry - especially in Hawke's Bay, the region which employs the most RSE workers. 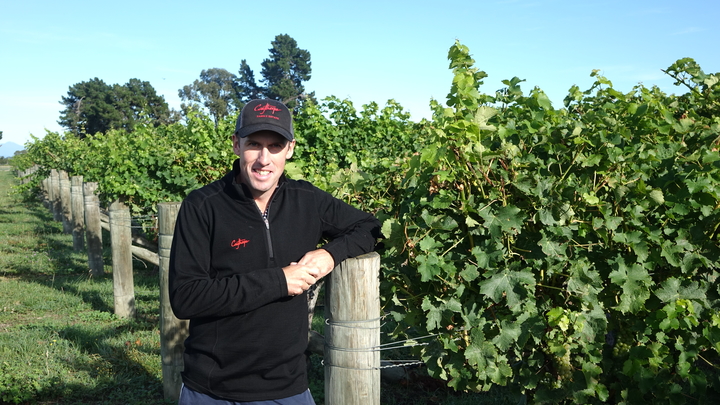 As the industry grows, farmers feel they will struggle more when it comes to labour.

For grape growers such as Simon Bishell, a fifth-generation farmer based in Wairau Valley, his property can no longer be worked by the family alone.

He says Blenheim and the wider region in Marlborough are too small to provide the seasonal staff needed and there is a need to continue pushing for more New Zealanders to get involved in the industry.

But, in the end, the reality is stark: without the RSE workers, the industry would collapse.

Back at Blenheim's drop-in centre, Ms Walker says she wants the Pacific workers to have independent advice and support through a union - in short, for those who made up this vital workforce to be treated with the respect they deserved.

*This name has been changed to protect his identity.