The move to create a seat just for Maori on New Plymouth's local council has caused racial tension amongst the city's leaders and triggered a binding citizens-initiated referendum.

As an Insight investigation has been finding out, the reaction to a proposal made by the city's Mayor has been described in equal measure as political suicide, visionary and a threat to the fundamentals of democracy.

So is the formation of race-based wards an example of how to work together with Maori, or does it drive a wedge between them and Pakeha? 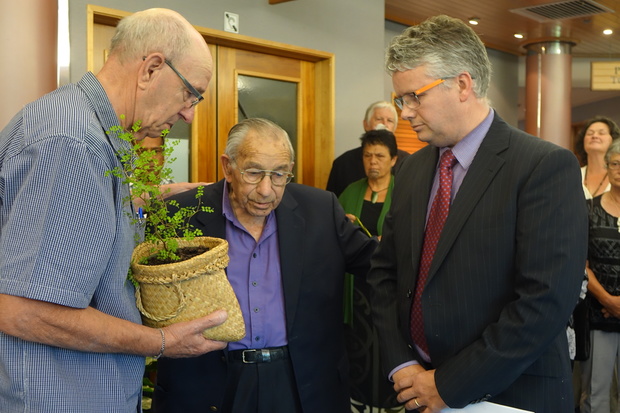 Kaumatua Rangikotuku Rukuwai (centre) blesses Hugh Johnson (left) and New Plymouth Mayor Andrew Judd following the handover of a petition likely to spark a referendum on the establishment of a designated seat for Maori on the council. Photo: RNZ / Robin Martin

There can be no argument that the New Plymouth District Council's decision to establish a Maori ward has divided opinion in the city.

It  passed by the narrowest of margins, 7 votes to 6 in September last year, and John McLeod, a former soldier, quit his council seat on the spot in protest.

Almost as quickly, Hugh Johnson, the then president of the New Plymouth branch of Grey Power, made good on his promise to start a petition to force a binding referendum on the issue. 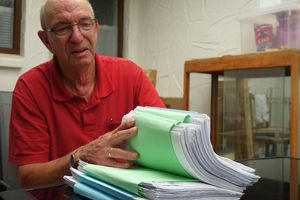 Hugh Johnson with his petition against the Maori wards. Photo: RNZ / Robin Martin

Both men claim a Maori ward represents separatism based on race and it is against their principles.

Hugh Johnson handed over his petition of more than 4000 signatures at a small and somewhat solemn ceremony at the council chambers earlier this month.

The retired electrical engineer, who is a former Lower Hutt councillor, has lived in New Plymouth for 15 years.

He says his reasons for not supporting a Maori ward are straightforward.

"I believe we are one country, one lot of people, not divided. The Maori seats in Parliament separates the Parliament and we don't need to spread it out into the local government area.

Mr Johnson said for a change as fundamental as a Maori ward the voters must have their say and that is why he's called for a referendum. 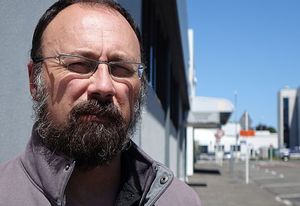 Dion Tuuta is a Taranaki columnist and was a research officer at the Waitangi Tribunal before becoming chief Treaty negotiator for the Ngati Mutunga iwi.

He said the sentiments of those who have rallied against the formation of a Maori ward have to be acknowledged and form a vital part of the debate.

Andrew Judd's championing of Maori representation started out, he said, as simply meeting the council's statutory responsibilities and ended up in a personal epiphany.

"Steps along the way have included working committees, representation on standing committees, all of which have failed for one reason or another and the last option which is actually legislated by the Crown is the Maori wards seat."

The 50-year-old Mayor, who admits he was previously in the "get over it" camp when it came to Maori grievances, said the process opened his eyes to what representation means for Maori.

"In joining with Maori on marae and hearing the stories of the past and of how they are having to face challenges today, yes, it was an epiphany and now I've seen what took place and understood and heard. I can no longer look back." 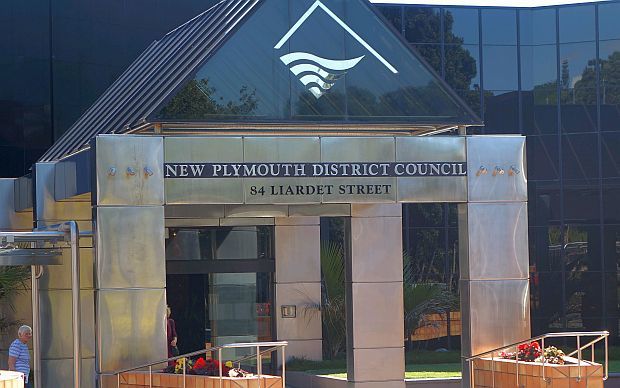 Under the Local Government Act, councils must seek meaningful engagement with Maori, which most do through various liaison committees, kaumatua forums, memorandums of understanding and regular consultation.

But the fact remains only 3.6% of council seats around the country are occupied by Maori.

Even taking into account the geographic spread of Maori and their relative youth, this falls well short of the 15% of New Zealanders who identify as Maori.

Maori wards is one response open to councils to help address this imbalance.

Only people on the Maori electoral roll can vote in a Maori ward.

Candidates for a Maori ward have to be nominated by two people on the Maori roll, but they do not have to be on the roll themselves or from local iwi.

Winston Peters said Maori are concerned about the same things as other New Zealanders, and not interested for special deals such as Maori ward seats.

"The mass majority of Maori couldn't give a tinkers about these sorts of demands. They want the real things, jobs, houses, first-world salaries, a decent education system for their children, healthcare for the old and their young. That's want they want."

Philanthropist businessman Gareth Morgan has just co-written a book, Are We There Yet? The future of the Treaty of Waitangi, which charts his vision of the way forward for New Zealand.

He says Maori wards deny people the right to equal citizenship and could sow the seeds of future discontent.

"If you give any group unique political rights you automatically, to the extent those rights give them power over other people, start crowding out democracy.

Mr Morgan is however quick to qualify this position because, he said, Treaty obligations are not being honoured Maori wards are part of a suite of policies such as Maori seats in Parliament and education quotas, necessary to redress imbalances.

"Until we get the Treaty honoured we have these mitigation policies in place which is basically an acknowledgement by the government that they are not honouring the Treaty."

But he's still not a fan.

"I just think in the case of wards themselves it's a bit of a sop in a way. It's almost like they are saying 'have a ward and now bugger off, don't annoy us anymore'."

The Electoral Act was amended in 2002 to speed up the creation of Maori wards, following Environment Bay of Plenty's drawn-out wrangle to establish one via an Act of Parliament in 2001.

Since then the Waikato Regional Council has established two Maori wards and about six other councils have flirted with the idea, but ultimately not gone ahead with it.

One person who knows how designated Maori seats work in a local body setting is the chair of the Waikato Regional Council, Paula Southgate, and she can only see an upside.

"We have two seats … and those two members sit around the table and are active decision makers over all the governance matters we face. They are inputting a Maori perspective all of the time into all of the plans we are making and all of the decisions."

"They are constantly bringing that kaititanga focus, guardians of the natural resources, and that's appropriate because a lot of what we do is resource management."

Ms Southgate says there was only limited resistance to the introduction of the seats in Waikato and they have been fully embraced and are seen as business as usual.