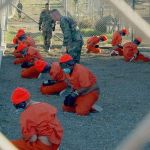 Barack Obama's first commitment as President was to order the closure of the Guantanamo Bay detention centre within a year.

But the attempt to shut it down has been dogged by problems, and more than 12 months on the camp remains open.

In this programme the BBC's Jon Manel explores how President Obama went about trying to close the world's most controversial prison camp.

And discovers why the US administration failed to meet the closure deadline.