Navigation for Inside Child, Youth and Family 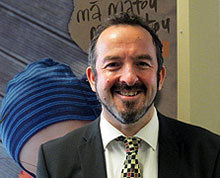 Paul Nixon has been CYF's chief social worker for about two and a half years. He has come from Britain, where he had an extensive background in care and protection.

In Aotearoa, he aims to tackle a number of problems frontline social workers are facing in their day to day jobs. Another major focus is how the agency deals with whānau Māori.

Mani Dunlop spoke to him about CYF's image with the public and the families it works with.

CYF promise of openness, honesty too late for some

Fergusson doesn't have many photos of daughter Krystal on display. They make him cry.

That's because Krystal committed suicide at just 12 years of age.

"A lot of the photos (of her) I've put away. They make me cry too much," said Fergusson, whose last name cannot be used to protect Krystal's identity.

Krystal's death followed her removal from a foster home after she made sexual abuse allegations about a caregiver. That meant she was separated from her siblings, which greatly distressed her.

A coroner's inquest into her death found a test carried out by a social worker to gauge Krystal's psychological distress and suicide risk was miscalculated, so she did not get the help she needed. It concluded she was let down by Child, Youth and Family (CYF).

Fergusson, who has 12 children, said they were taken from him and his wife when they were both facing drug charges.

He said he was not perfect but believed Krystal would still be alive if it were not for the agency's mistakes.

"I think they need to change their ways and be more transparent," he said.

"They did make a lot of changes, and I'm pleased with that. Even though she's gone, she's still made a mark on education in the sense that she educated those people."

CYF has acknowledged it failed Krystal and is promising more honesty and openness as it tries to rehabilitate its image with both the public and the families who have had to cope with its failures.

The agency is undergoing a major review of work loads and management, due to be completed in December 2013.

But while the review is being carried out, the agency charged with looking after the most vulnerable children in the country is under fire.

Chief social worker Paul Nixon came to New Zealand with a background in child protection in Britain. He has been in his role here for two and a half years and said he knew mistakes could be made.

"We've tried hard in the past to articulate that and I think sometimes we've done that really well," he said.

"We're trying to do that into the future, too. We won't always get it right but we'll always do our best and be honest and open and explain to people what's happening and why we're doing what we're doing."

This year, coroner's findings were also released into the death of Isaiah Nathan, who was 13 when he died. Isaiah had been missing from a CYF home for three months when he stole a car and fatally crashed it.

The coroner found there was a major communication break down between CYF and the police about who was looking for Isaiah.

There had also been alarm over how the agency vetted its caregivers, after approved caregiver Daniel Luke Taylor pleaded guilty to eight charges of sexual offending against boys, including one who had been in his care in Kaitaia.

Mr Nixon said CYF was trying to be more open with the public about its work.

"It's a hard story to tell, to talk to the public about child sexual abuse or serious neglect. These are hard concepts to communicate with clarity, so that's quite a hard thing to do," he said.

"But we're keen to do that, and it seems to be very important to me that if we're going to be accountable as a public service agency, we need to be able to explain to people what we're doing and why we're doing it."

Association of Social Workers in Aotearoa chief executive Lucy Sandford-Reed said caseloads were too heavy and there was a lack of professional support within the agency.

Social workers were under a huge amount of pressure, and the agency's image was mostly negative, she said.

"When you're in the business of care and protection and youth justice, often an organisation like Child Youth and Family does get a bad name because they are seen to be removing children from their families.

"I think the grind of working in that can be difficult."

Ms Sandford-Reed the caseload review would hopefully help fix the under-resourcing and heavy caseloads workers were having to take on.