Navigation for An Indescribable Beauty

A young German writes letters home to his mother after immigrating to Wellington in 1859.

Wellington, 1859, and a young German immigrant called Friedrich August Krull writes a series of letters home to his mother about his new life in a far-flung country. More than century later, those letters have been collected in a new book An Indescribable Beauty, published by Awa Press. The letters capture a country on the cusp of change, and describe a New Zealand we would struggle to recognise today. 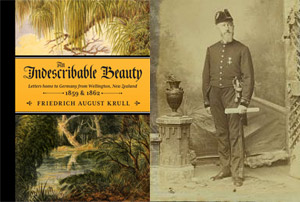 Fredrich Krull in uniform of Consul for the German Empire. He was appointed in 1871 aged 36. This photo is from the collection of Whanganui Regional Museum.