"For Māori people to see words like Aotearoa or te reo Māori and its use in general to be thrown around so lightly and so harmfully, I think it's dispiriting for a lot of people in that they start to disengage from the debate as well." - Morgan Godfery

Political commentator Morgan Godfery says that to be told your name for your country is wrong can be harmful, as it shows deeply cultural and deeply personal issues that go to the heart of their identity can be up for debate.

With National Party leader Judith Collins demanding the debate on whether the name Aotearoa should be put to a referendum, Māori are again experiencing a heightened level of racist attacks - and the harms are not trivial. 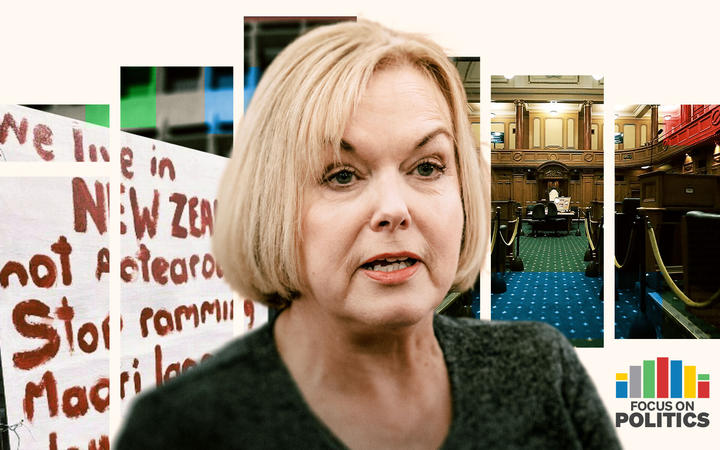 National MP Stuart Smith's suggestion there be a referendum on the use of the name Aotearoa caused division between politicians and New Zealanders alike, and party leader Collins was quick to lend her support to the idea.

Collins has been accused of dog-whistle politics and race-baiting, she's also been praised for standing up to wokeness and voicing New Zealanders' fears. She told RNZ the call for a referendum was not coming from her but - no matter her motivation - she set a wave of harm in motion.

National Māori Authority chair Matthew Tukaki received a racist letter at his home, from an unknown sender. He believes it's no coincidence that the letter arrived in the thick of the debate around the name Aotearoa.

"This is politicians who are creating an operating environment that emboldens these racists and this nonsense sort of conversation."

He's not the only one. Law student Phoebe Sullivan was sitting in a study room on her phone, when the racism rolled in and says the debate felt like an attack on her cultural identity, her language, and her people.

RNZ broadcaster Māni Dunlop is used to waves of racist texts whenever a Māori issue hits the headlines. Sometimes she laughs them off, other times it feels personal.

Research suggests that when comments move from debate to racism, the impact is much greater than just hurt feelings, it has a consistent link with health - particularly mental health.

Collins has been accused of desperately trying to climb back up the polls by adopting a political approach like that of controversial former National leader Don Brash. His 2004 speech at Orewa Rotary Club exposed Māori to attack over wider race issues and there are signs the debate over Aotearoa could do the same.

On the other side of the coin, times change. A Colmar Brunton poll last year found 84 percent of New Zealanders felt te reo Māori was an important part of New Zealand culture.

Māori Language Commission CE Ngahiwi Apanui says even provincial New Zealand, which Collins claims are upset by the use of the name Aotearoa, are actually supportive of te reo.

National looked outdated when it called for a debate on the use of the name Aotearoa, he says, and if there is a referendum they might be surprised at the result.

"At the end of the day, the data that we're seeing probably supports people changing the name from New Zealand, which is not even an English name. And if that happens, I'll be a very happy chappy."