How armwrestling saved NZ champion Maateiwarangi from a life in prison

Maateiwarangi Heta-Morris has broken 7 arms since he began armwrestling competitively.

At 6 foot 2 and weighing about 160kg, his stature and incredible strength has earned him the title of 'Big MAT' or 'the Beast' - and also New Zealand's Superheavy-weight Arm wrestling champion for the last eight years.

Having just competed in the World Armwrestling Championships in Romania this week, he came away ranked 10th in the world in his division and was also awarded a Gold medal for his role as Team captain.

He told First Up the sport has saved him from a life in prison and he's come a long way from armwrestling his mates for food on top of rubbish bins at Western Heights High School in Rotorua.

"Yeah, I was just doing a bit of it at high school on the rubbish bins just for food or whatever and then fast forward a little bit - then I started doing it at the pubs," he said.

"It just went from pies to jugs. Pies to beers."

He remained undefeated in his town for years, until one night, the DJ at his local pub beat him.

"Someone had gotten him out and he smoked me. But the way he beat me, I knew it wasn't the normal way that I had been armwrestling and he had told me that he had learnt a few techniques," said Maateiwarangi.

"He messaged me a couple of weeks later and said there's a group up here in Auckland called the Sons of Samson. They're an actual arm-wrestling group and we went up there for training and definitely got schooled up." 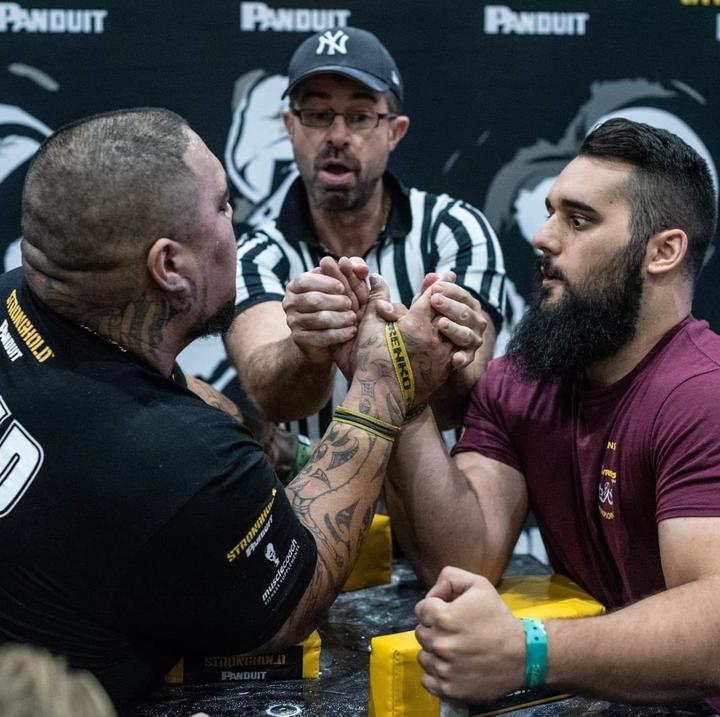 So from the pub to competitive armwrestling - he's held the title of New Zealand's super heavyweight arm wrestling champion since 2012.

He says his success has been driven by his passion for his culture so he's infused his culture into the sport he loves, taking his Aunty to the World competition in Romania who is an expert in Tai mirimiri - Māori massage therapy - to help with his preparations and recovery.

This year he brought even more mana to the table when he came face to face with his opponents wearing his freshly-tattooed tā moko.

"This is my mataora and for me to wear this, it is a representation of my whakapapa, where I'm from, our culture, my kids and the mahi I do," explained Mr Heta-Morris, himself a tattoo artist and has done tā moko on others.

"This is a big respect to the Atua that helped us with our art, our culture. Every time I step up to the table I go up there with my tūpuna behind me. Even more so now that it's on my face. I'm proud to wear it." 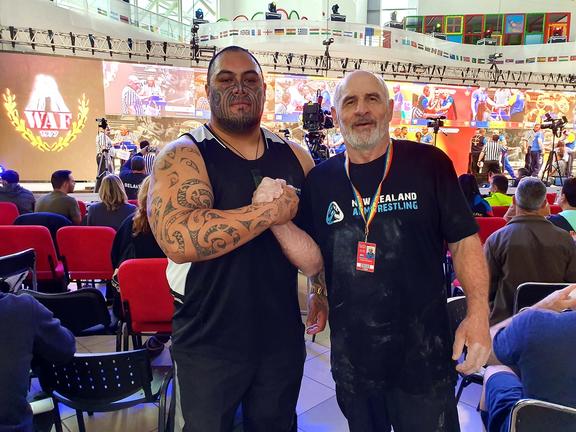 While his competitive title is 'the BEAST', Maateiwarangi is a sentimental gentle giant at heart.

"One thing I usually do before I step up on stage is - I look up to the top right of me and I sort of envision my grandparents watching me. My grandmother was probably one of my biggest followers and fans and she didn't know anything about armwrestling, nothing at all. But I can see her up there so it's pretty cool and right then, I usually get this tingling feeling up the back of my neck and that's usually when 'the beast' is turned on."

But it's not just about the thrill of competing. The sport has become so much more than that for Maateiwarangi

Before armwrestling, he had a hard life and battled alcohol abuse. He says the sport became his saviour and turned his life around.

"I wasn't what you would call a good role model for my family and for my kids and my grandmother could see that ... probably in jail and not able to see my kids. It's a bit of a hard question eh, but things are a lot better now" said Maateiwarangi.

"I owe a lot to the sport. It gave me discipline. It gave me something to do. That there was the biggest reason - I had no driving force, I had no vision, no ambitions. I was just living day by day.

"If anything - I'm more happy that [my nan] got to see me turn my life around before she left."

He's got a message for troubled young men today.

Maateiwarangi said each match is about bettering himself every time.

"I've always said that at the end of the day, I'm just arm-wrestling myself. So I use that when I go up on the table.

"I'm on a mission. So I'm doing something with my life."