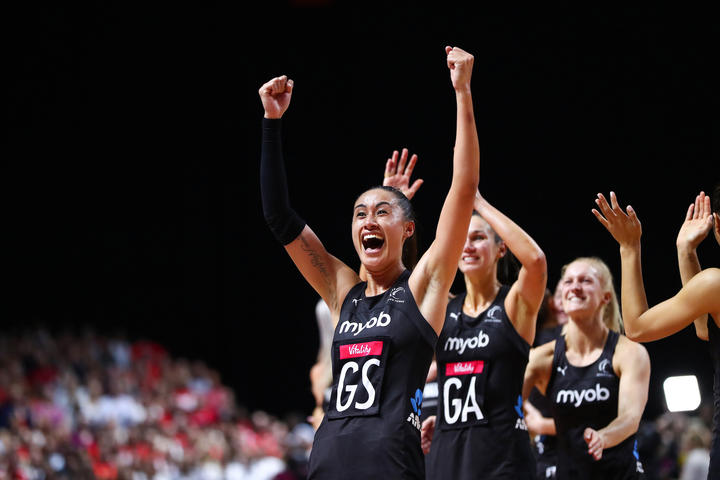 "The moisture in my eyes tells me all I need to know, I was there in Jamaica in 2003 and remember vividly that match and this one mirrored it in many ways."

"The start was slow, by the end of the first quarter they had got back on to even footing with the Australians and then they just fought and they scrapped and to be brutally honest I didn't think this Silver Ferns team had a performance in them quite like that yet.

"Noeline (Taurua) despite her ecstasy at the moment will tell you that this is not by any stretch of the imagination the finished product as far as she's concerned with this team, she's still building, it's utterly remarkable that she has achieved this."

"In my opinion, Noeline Taurua is the best netball coach in the world, even though she's never won a world title as a coach before."

"To say this side was magnificent is to do them a disservice, they played for sixty minutes with deep intense concentration, every player on the court. Every player made a contribution."

"I'm just immensely proud," He told Indira, "I got to spend some time with the team earlier in the week and they were really calm, Noeline Taurua has brought a structure to the team that they have all bought into"

"We decided that t was going to be a stressful occasion so we thought we'd share the stress, I know she (PM Jacinda Ardern) is immensely proud of the team as I am."

"I have been sending messages to Jenny Wiley and Alison Ferguson and to Katrina Rore, we'll find a time to talk soon but this is a real moment for them. There's a huge crew of their whanau over there with them who will just be so proud, these are people who've been with them their whole careers. they are a tight unit and I'm pretty sure they will celebrate tonight and we look forward to seeing them in New Zealand soon."

And their homecoming?  "I'm pretty sure the people of New Zealand will want to give them a warm welcome and I'm sure we'll have some conversations about that in the coming hours."

"I don't know about Jacinda but I certainly won't be going to bed after that! It's a working day Monday, cabinet day, we will certainly be able to celebrate the amazing success Silver ferns in our Cabinet meeting."

Players from the New Zealand Mens' Netball team gathered in one of their homes in West Auckland in the early hours of Monday morning to watch the game together.

Coach Sarah Michelle Vaeau had almost lost her voice by the time she spoke to First Up and said she had been yelling at the TV during the Weekend in the Ferns match against England and then Australia in the final.

"My Messenger app was going off around the country between the teams' players as we're all spread out around the New Zealand," she said.

"Us Auckland players got together this morning and my voice is probably the best out of the room actually," said Ms Vaeau laughing.

"I was kind of running stats so that I could put it up on my Facebook live but we were all on the edge of our seats. We knew that it was going to come through and once they got that three-goal win, we knew that they'd have it in the second-half."

While the Mens' Netball team toppled the Silver Ferns twice in their preparations for the World Cup., Ms Vaeau said they had been backing the Ferns all weekend.

"Although they lost twice to the New Zealand Mens' teams in the Cadbury series, they really did hit their targets pre-Worlds. And look - it paid off!"

"They'll probably take a couple of hours to get through all their messages of love and support but so hugely proud and how great is this for our country and the sport as a whole?"

RNZ Sports reporter Ravinder Hunia has been in Liverpool covering the World Cup Netball tournament and was standing in the Media box waiting for Coach Noeline Taurua and the Ferns' players to come out after the presentation ceremony.

"To not be awarded the gold this time will be foreign to a lot of the Diamonds' players who are fairly new," explained Ravinder referring to Australia's three-time back to back win of the Netball World Cup championship tournament.

"But exciting times for New Zealand netball and kudos to Noeline Taurua - she really did solve the Australia Diamonds Rubix cube and got the win."