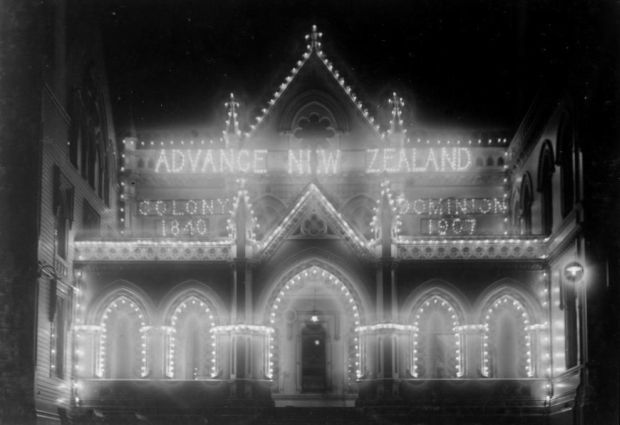 What kind of country were they leaving behind? What sort of life did they lead prior to the war? Who were these men from a young country, and what do New Zealanders of today know about the New Zealand of a century ago?

On August 5, 1914, a densely packed crowd of around 12,000 people cheered  the news that Britain—and therefore the Commonwealth, had declared war on Germany. The news delivered via telegram from King George V—read by Governor Lord Liverpool, was promptly followed by an endorsement from Reform Party Prime Minister William Massey. 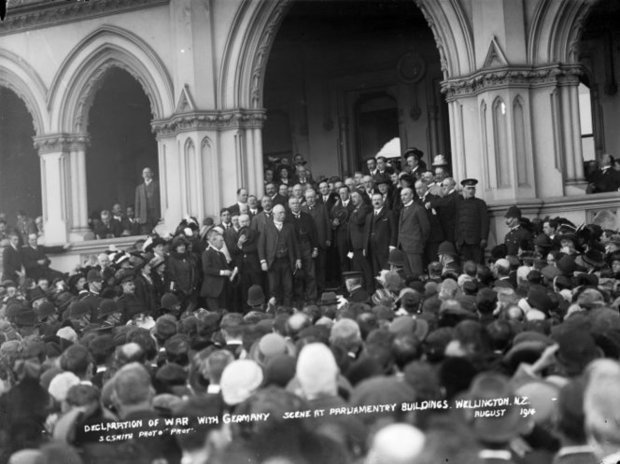 Ladies and Gentlemen and Fellow Citizens,—After the very startling announcement just made by His Excellency the Governor, I fear that we are all of one way of thinking—that the Empire, the British Empire, and the British people are to-day face to face with the most serious crisis ever experienced in the history of the Empire, and I think we shall come through successfully. I am confident we shall. (Loud applause.) Yet we must take notice of the very earnest advice contained in the last announcement of His Majesty the King, and which has been repeated by His Excellency the Governor: ‘The British people must stand together calm, united, resolute, trusting in God,’ and I am glad to say, ladies and gentleman, that is the feeling which obtains to-day, not only in New Zealand, but in every part of the Empire. In consequence the British people are able to-day to present a united front to their enemies. (Applause.). So far as the New Zealand people are concerned, New Zealand has done its duty on every occasion that the Empire required assistance, and will do its duty on the present  occasion, and will do its duty in a whole-hearted manner.

That we shall be called upon to make sacrifices goes without saying, but I am confident that those sacrifices will be met individually and willingly, and in a manner worthy of the occasion, and the highest traditions of the great race and Empire to which we belong. Our first duty is to do everything we possibly can to protect our country, and at the same time do everything we can to assist the Empire, and when we have done all that mortal man can do the rest must be left in the higher hands of ‘Him that keepeth Israel and that neither slumbers nor sleeps.’  My message to you at the most trying moment of history is this—

“Keep cool, stand fast, do your duty to your country and Empire.”

It should have been the pinnacle of Massey’s career as a politician and of his ambitions to serve and be sustained by Great Britain. But like the half-built Parliament House behind him, William Ferguson Massey presided over a nation that was struggling to write its own narrative and was starting to show the strains of fiction.

We were a nation of insecurities and fears.  Highly militarised, we were nervous about the possibility of our ties with Great Britain coming loose and the rise of Germany and Japan in the Pacific. There were economic problems looming on the horizon. And long-buried rifts were beginning to re-emerge between worker and employer, Pakeha and Maori, Protestant and Catholic. So who were we then? What did we think about the issues we were faced with? What do New Zealanders of today know about the New Zealand of a century ago? And what are we mistaken in believing?

This being New Zealand, there was plenty of sport being played. We were active and identified ourselves as a strong, confident and competitive international sporting nation.  Rugby was by far the dominant sport and athletics was a very popular spectator event as was competitive wood chopping. Canterbury’s favourite son Anthony Wilding won the Wimbledon singles title in the years: 1911, 1912, 1913 AND 1914 and also cleaned up twice at the Australian Open.

Not only did we like to play and watch sports, we also liked to put our money where our mouths were – betting was a popular past time which meant that match-fixing wasn’t unknown. And although it took some time for New Zealand society to accept women within the wider sporting arena; tennis, golf, and croquet were favoured as suitable sports for women, with cycling becoming.

In the year before the outbreak of the War, New Zealand was surprisingly modern and curiously recognisable. We had a sophisticated food culture and an emerging literary scene; we were incredibly well-read with plenty of libraries to facilitate our literature needs.

Music was the food of love and there was plenty of entertainment to be had; vaudeville, music hall, and light classical concerts were booming, and it was almost impossible to avoid the many brass bands that were dotted about the cities and towns. Many homes had pianos, and sheet music was sold in music stores across the country. Immigrants from the UK often brought with them bound copies of their favourite music scores—their early version of a ‘mix tape’ in the form of a large book.

But leisure aside, we were also busy cultivating a global outlook on trade and policy, making headway into industry—exporting our butter and lamb to Britain, and importing much of their culture back to here.   New Zealanders had incredibly sophisticated taste-buds beyond bread and butter. According to  David Veart — author of ‘First Catch Your Weka: A Story of New Zealand Cooking,’ Kiwis loved their food, taking inspiration from international cuisines and utilising imported ingredients.

In 1909, the government of Sir Joseph Ward passes the Defence Act, which imposes compulsory military training on all males aged 12 to 30. By 1914, this means that New Zealand has at its disposal, a legion of fit young men with the facility to fight. We were primed and ready, waiting in the wings—along with a battle cruiser which we had gifted to Britain. The HMS New Zealand  was offered not only as a symbol of New Zealand’s support of the mother country, but also in the ultimately vain hope that Britain would use it to patrol the Pacific. 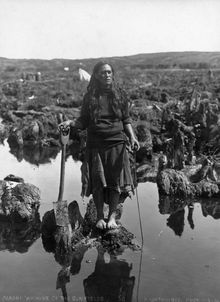 Tensions and the Rise of Industry

New Zealand experienced vast change in the lead-up to the war, transitioning from colonial life to that of a fully-fledged modern society with a bustling international trade, prosperous nation with an increasingly urban rural divide.

Underneath the surface of Pakeha prosperity in the ‘Better Britain’, there were strong currents of angst, not the least of them to do with race relations. As Felicity Barnes explains, while we strived to be a modern nation, that modernity had a monochromatic feel to it.

Census figures show Maori numbered around 50,000 out of a population of over a million at this time and controlled around 30% of available land. But the land was poor and nearly unusable for farming. While Pakeha New Zealand shifted and development towards urbanisation ,  Maori  become increasingly confined to rural life, described by historian Michael King as ‘a rural proletariat, part of it land-owning but not land-using; part of it disinherited by the loss of land, and increasingly reliant on seasonal work. 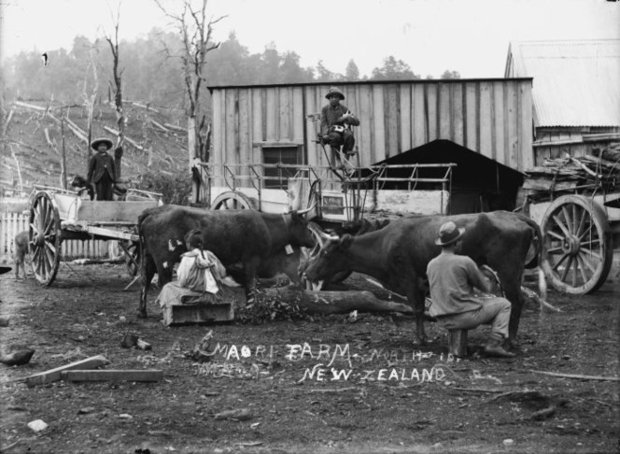 With a rise in urban population, disparities prevail and disputes arise over wages and—the first in a series of strikes occurs at a Huntly Coal mine, followed by a large dispute at the Wellington waterfront (late October 1913). Other strikes break out across the country and continue until January the following year.  In many ways, these strikes become a war between the workers as the Red Feds  under the umbrella of the New Zealand Federation of Labour battled ‘Massey’s cossacks.’

Holding Tight and Growing Up

The newly-minted Dominion was a forward-thinking country with its sights set high, and predominantly on ourselves and our place in a modern world. We were simultaneously desperate to cut those apron strings, yet ill-prepared to release our grip.

So farthest flung from Britain we might have been and possibly clinging a little too tightly to mum, as the centenary of our involvement in the Great War rolls in it’s important that we look more closely at the kind of people we were then. Because we were more than an uncouth farming nation with an unwanted indigenous people. We were traders, musicians, artists, authors, conservationists, foodies, farsighted internationalists and spiritual innovators. And when we chose to hold the hand of Mother Britain, it was about more than just duty. 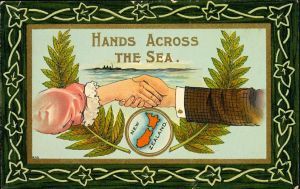 Recipes from Papers Past

An interest in old cookbooks and nostalgic recipes is no modern hobby. In this article published in the Press on the 8th of July 1919, “M.M.” writes about a book she’s been lent, most likely The Frugal Housewife (or complete woman cook. Wherein the art of dressing all sorts of viands, with cleanliness, decency, and elegance, is explained in five hundred approved receipts) by Susannah Carter, first  published ca 1765 in Clerkenwell

The author takes delight in the book’s use of the quaint English and the old-fashioned spelling, as well as the luxurious ingredients and sheer excess.

…the processes, as a rule being very tedious, and the ingredients required anything but frugal. Altogether "The Frugal Housewife,"  quite apart from its ideas on economy, is a delightful book to read in these days of busy lives for it gives a quaint idea of old-English life and unhurried lives. Quite recently a Wellington magistrate referred to the women who rushed homeward at 5:30pm with the chops for their husbands' evening meals under their arm, as "the frying-pan brigade.”What, I wonder, would these busy ladies think of the making of a Battalia Pie?" 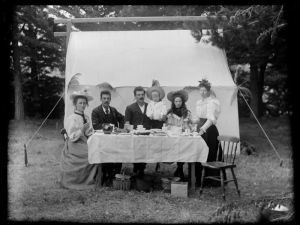 While economy is a dire necessity in the countries now at war, financial conditions, which are becoming strained in our own land, make it no less important here. Many a housekeeper who finds it necessary to retrench in household matters is not sufficiently well versed in small economics to make them count. The French housekeeper is the most economical of housewives, and what to the Australian would be emergency economy, to her is a matter of course. To begin with, the French method of buying only a day's supplies at a time enables her to economise more than would be possible if a more lavish form of purchasing were customary. The Australian may well profit by some of the little savings of the thrifty Frenchwoman, and she may begin right at the bread boiler, saving every crust of roll or bread. The larger crusts — and how they accumulate! —serve in many ways —toast to make rusks, if fresh; or saved to put in the bottom of the salad bowl to absorb the dressing, and to be eaten when the salad has disappeared. Pieces of toast are cut in little dice, and when required for croutons are heated by toasting in a frying pan in a little melted butter and served golden-brown. The crumbs are dried in the oven, rolled fine with a rolling pin, and put away in glass jars for cutlets, etc. but they must be watched to see they do not become stale or mouldy.

Lettuce leaves, the ones we throw away, are saved by the French and brazed in good gravy as a vegetable, tossed with bacon fat and vinegar in a covered frying pan, and served as wilted lettuce, or cooked in broth for cream of lettuce soup. A few lettuce leaves with a spoonful of sugar added to green peas or tinned peas give them a delicious flavour. Added to pea soup they are entirely satisfactory.

Outside cabbage leaves are never thrown away by the French, but are saved, chopped, and cooked with salt beef or pork to give the meat a flavour. A little cream is added and perhaps a few croutons of fried bread.

If the French wife peels apples or peaches, does she throw away the parings? Never. She pops them into a little porcelain saucepan, with the requisite amount of sugar and water and presently there is a tumbler of delicious jelly.