Georgina Beyer on Carmen Rupe: 'We had to live in this twilight'

“From the good and the great to the lowest of the low, she bridged a gap,” says Georgina Beyer of transgender trailblazer Carmen Rupe.

Carmen was born Trevor Tione Rupe in 1936 and grew up in the small North Island town of Taumarunui. She was one of a family of ten, and was brought up doing ‘the kinds of chores a girl would do.’ 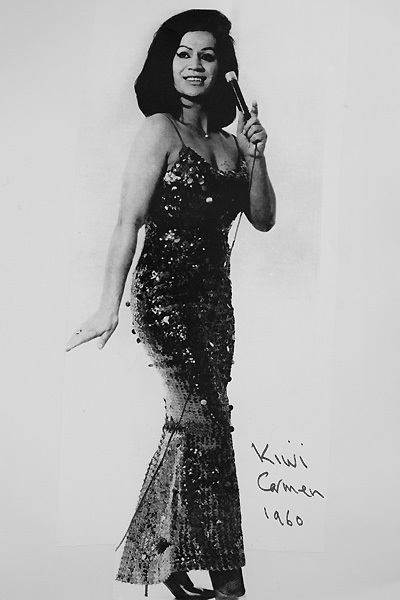 Carmen realised she was different when she was about eight-years-old, and explored her trans identity throughout her teens and early twenties, taking direct inspiration for her name from one of her idols, Spanish Romani dancer, Carmen Amaya - the first female flamenco dancer to do footwork largely reserved for male performers.

Also a keen flamenco and belly dancer, Carmen had a variety of jobs before she headed off to the bright lights of Sydney’s cabaret circuit, and the infamous red-light district, King’s Cross.

But on returning to New Zealand in the late sixties, Carmen was keen to add some spice to Wellington’s nightlife scene. She set up a number of businesses including cafes, a brothel, a curio shop, and a nightclub.

One of her most popular businesses was Carmen’s Coffee Lounge - a late-night international cafe, which ran from 6pm to 6am.

Georgina Beyer, New Zealand’s first-ever transgender MP, arrived in Wellington when she 16-years-old and felt at home as a patron at Carmen’s establishments.

“She had a beautiful spirit and a wairua and although she was this extraordinary person, she had this compassion for those who were down and out and underprivileged,” says Beyer from her Wellington townhouse.

The Balcony on Victoria Street also attracted a steady stream of punters. It seated up to 400 people and focused on variety shows. There were striptease performances, drag queens and crossdressers, flamenco and comedy acts.

Busy round the clock, these were destination hotspots and Carmen made a concerted effort to employ people from the rainbow community at a time when job opportunities were limited.

“The law worked against us so we had to live in this twilight zone,” says Beyer of the prejudice that prevailed at the time.

“Camen was an omnipresent figure...she protected us from the haters and homophobes,” says Beyer.

“She was an awesome presence and had very little judgement of you.”

Carmen was a savvy businesswoman who knew how to attract attention. She was often seen gliding down Cuba Street in designer ball gowns, and she knew every single shopkeeper by name.

Beyer says Carmen’s larger-than-life presence helped to desensitise imagery around drag, taking it from a performance vehicle into the everyday. 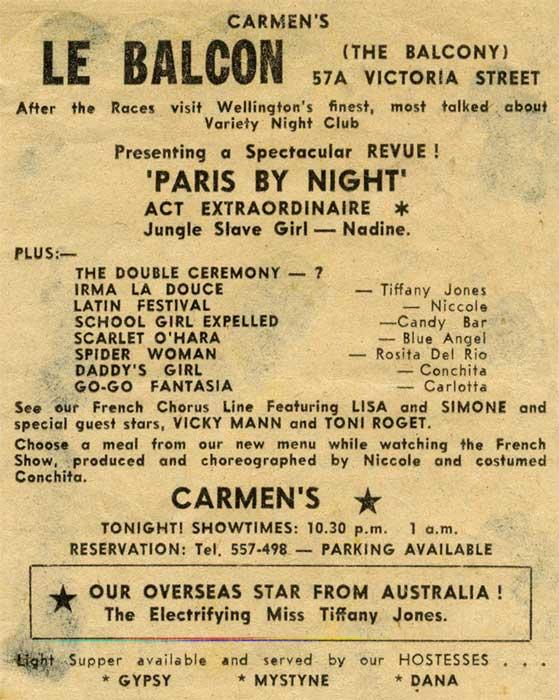 And Carmen wasn’t afraid to flaunt her wares.

“The now-defunct Truth Newspaper probably remained alive for some time with the stories they got to write about Carmen and the scandal that would surround her,” says Beyer who recalls the infamous time Carmen attended the races, revealing her ‘cavernous’ cleavage.

“She dropped the top of her dress. It made a mockery of the norms of the day and she pushed it with just those little moments,” Beyer says.

Carmen made the most of every opportunity, whether promoting her businesses, or charity causes. In 1977 she famously campaigned for Mayor of Wellington and was supported by property developer Bob Jones.

“She just knew that she came from a world that was not treated fairly or equally, and she pointed out things in the area of human rights.”

“I came in touch with her in the 90s at a group setting to do with HIV and aids,” she says.

Dame Catherine remembers Carmen was generous with her time, despite being in demand for public speaking engagements, or otherwise.

“MP Tim Barnett and I were wandering around the sex worker zone in Sydney and she was clearly working, but really pleased to see us,” Dame Catherine says.

“As we were talking there was a really young man hovering, obviously waiting for us to clear off so he could pick up Carmen.” 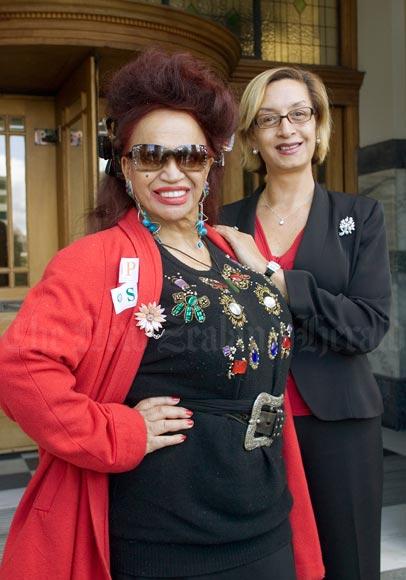 During the mid-nineties, the NZPC opened a community space on Willis Street, which had been damaged after an arson attack.

“We had to get it painted and glammed up and Carmen came along and informally opened the new place for us. I remember her sitting there, bouncing babies [on her knees] and chatting,” Dame Catherine says.

In this homely setting, everyone was in awe of Carmen.

“She certainly had a presence and came across as quite humble. She didn’t have a showoff kind of manner, she was very approachable and wasn’t the life and soul of the party in that context.”

A recipient of Diva Hall of Fame (1996), Carmen also performed at the Sydney Gay Games and received a Hero Lifetime Achievement Award, (2003) among other achievements.

Carmen was living in Sydney when she passed away due to kidney failure. She was 75-years-old.

As an open trans person and very public figure, Carmen left a legacy behind that will never be forgotten.

“You couldn’t meet Carmen and not remember her.”

Listen to the latest episode of Eyewitness to find out more.