Eyewitness: the Sisters Overseas Service and the 1977 Abortion Act

When restrictive new abortion laws are passed, a group of women decide to act. 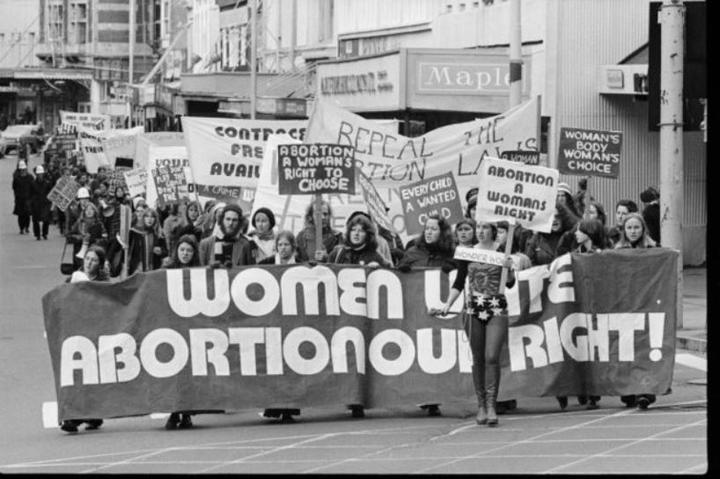 It's June 1978, and Judy* has a lot on her mind. In her second year of nursing college and dealing with a difficult break up, she was struggling with the typical challenges of being a teenager, but was also beginning to feel ill. Judy was taken into hospital with stomach pains, diagnosed with appendicitis, and rushed into surgery. When she came around from the anesthetic, she was told something shocking. She’s pregnant.

“I was not sexually active, so how did it happen?”

Judy racks her brains. She looks back through her calendar and works out the date she must have got pregnant. But Judy can’t remember much about that night, which is weird -  she’s never had a memory blackout before. So she asks her flatmate; did anything strange happen that night? Her flatmate remembers that Judy was brought home by security guards that night when she was found wandering the grounds of the nurse’s accommodation in a total daze. Again, really odd, and really out of character.

But then…. it dawns on Judy.

“It turns out that a young man I knew at school had coerced me into going over and saying goodbye to him because he was going back to Canada, and I was roofied (drugged) and raped.”

Judy confronted her rapist last year and today, she feels like she’s finally getting some closure. But in 1978, she was lost and confused. She had no support. She felt totally judged.

“I’m pregnant and everyone’s saying ‘well how did you get pregnant? Who was it?’ ‘Ah I don’t remember' and of course immediately, in that day and age, I was just a dirty bitch. And the whole family, everybody other than my nursing friends, all were like, ‘ew, you’re worse than the worst. Worse than a slut because you can’t even remember having sex.”

Judy felt her future closing in on her.

“It got to the point that I couldn’t cope. I mean honestly, it was like what am I gonna do? You know, I’ll get kicked out of nursing, I’ve got nowhere to go, except home, and that’s not really what I want to do because my mother was really terribly judgmental.”

Judy felt stuck. Just months earlier, the Contraception, Sterilisation, and Abortion Act of 1977 had come into effect, and getting an abortion in New Zealand had become pretty much impossible. 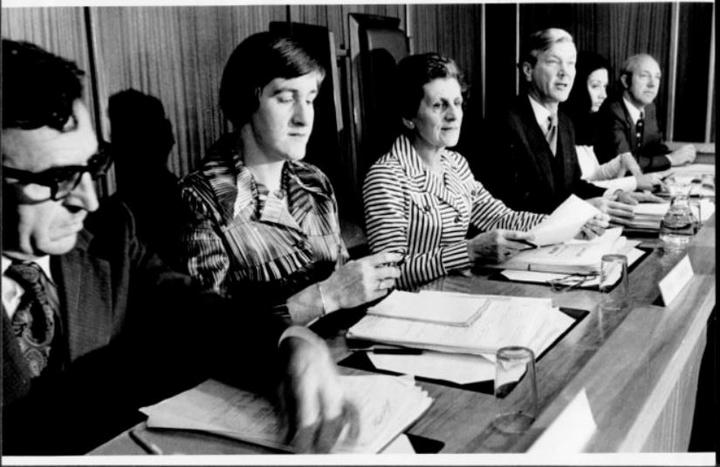 The law on abortion in Aotearoa has always been confusing.  So confusing, that at the beginning of the 1970s, only a third of doctors actually understood what qualified as a legal abortion.

Before 1977, if you wanted to end a pregnancy, the process was difficult and in no way guaranteed. Even if you could find a doctor who would write you a report recommending an abortion at a public hospital, you would still have to go through assessment committees, get the approval of four doctors, gynaecologists, the medical superintendent of the hospital, social workers and psychologists. And even when women jumped through all those hoops, they could still be denied an abortion. And they often were.

If you had enough money, you could go to a private clinic, but the procedures offered there were invasive and expensive, and clinics could still deny people. Some women preferred to travel to Japan, the United States, or the UK, and once abortion was legalised in South Australia at the end of the 1960s, many women went there.

But if money and time were short, some women chose DIY options like drinking poison, using knitting needles and douching with hot oils or bleach – all potentially lethal.

By 1974, the Auckland Medical Aid Trust was set up, offering safe abortions and counselling. Sympathetic doctors referred patients there, knowing that there would be fewer hoops to jump through.

But not everyone was a fan. The clinic was illegally raided by police, and there were constant lobbies to shut it down. 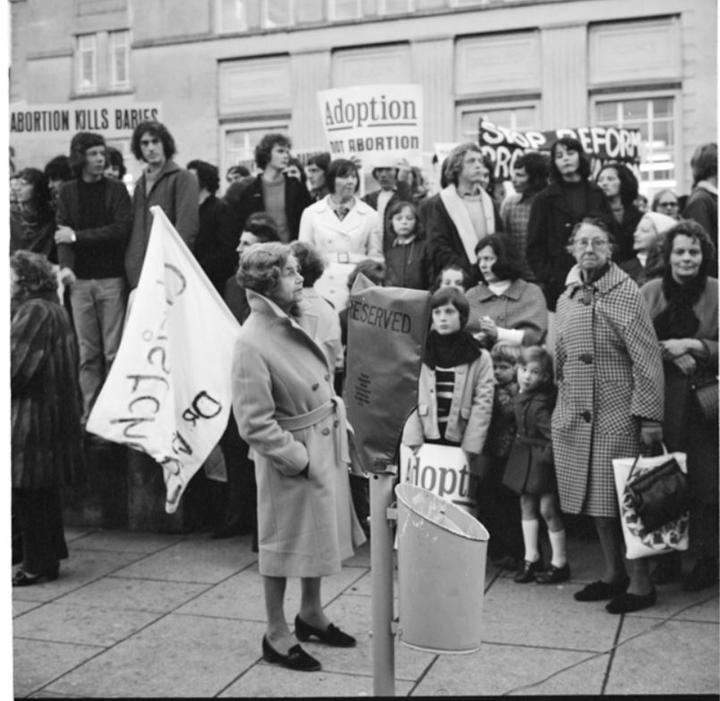 By 1975, the abortion topic was getting so hot that the National government commissioned an inquiry. Two years later, in the week before Christmas, 1977 – after lots of amendments and an epic all night sitting – the Contraception, Sterilisation, and Abortion Act was passed.

Jan Clark had been involved in the campaign to reform the law on abortion in New Zealand, and she was there that long night in Parliament.

“There was a ghastly inevitability about the actual passing of the bill about three o’clock in the morning… it wasn’t a shock because we knew the way the numbers were going.” 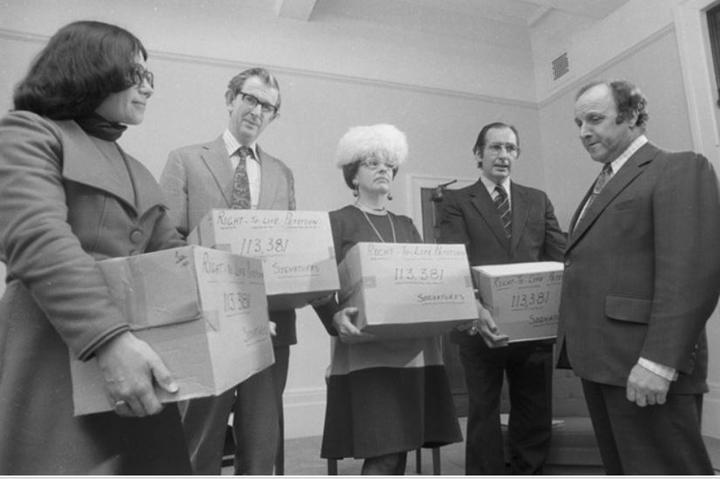 The Society for the Protection of the Unborn Child, aka SPUC, had a big influence. They claimed to have over 30 members in parliament. Lucy Kirk, the wife of the late prime minister Norman Kirk was one of SPUC’s most high-profile supporters.

Also there to witness the Act passing was Dr Carol Shand, a GP who’d been referring patients to the Auckland clinic for abortions. She remembers the confusion in parliament that night.

“Nobody quite understood it, actually, when it was passed.”

Yes, the bill was still confusing. In some ways, the Act actually expanded the legal grounds for abortion – terminations up to the 20-week mark were now legal -  but it also introduced new caveats that restricted where abortions could be legally performed. That meant the Auckland clinic was forced to close, and it was much harder for women to get a safe abortion in New Zealand.

In the weeks after the Act was passed, women mobilised. From Auckland to Christchurch, Dunedin to Wellington, women like Carol and Jan formed grassroots groups to help other women travel to Australia for terminations. They called themselves The Sisters Overseas Service, or SOS. They published branch numbers in feminist magazines and newsletters, and the word spread.

Judy heard about SOS from a friend at nursing college.

“I was given a number and (told)  ‘try these people’ and I rang them.”

At the other end of the line, was a volunteer - one of the many women across the country working to operate a help line for women seeking abortions. Jan Clark was one of those volunteers.

“Eighteen hours a day, potentially you had to be available… it was amazingly busy, between about ten and twenty calls a day”

The conversations were all about providing emotional and practical support. Judy still remembers the call she made.

“It was all, ‘we’re here to help, now this is what we’re going to do, no don’t worry about anything, all you have to do is A, B, C and D… that’s fine...’. It was like this calm cloud around me which meant that all of a sudden, all the other noise stopped, and I could get on and do what I needed to do.”

Jenny* was another volunteer for SOS, based in the Dunedin branch. She remembers the sense of urgency and solidarity of that time.

“We came together because we shared a kind of common outrage that women’s lives, here, in a so-called democracy, were just not able to be lived in the way that we wanted.”

In Wellington, Carol Shand used her medical connections to link up with the best abortion clinics in Australia.

“My role was as a trustee – so we legally set up the service and administered the finance… and I was also, in the beginning, very knowledgeable about what clinics were available.”

Most women paid their own way, but for women who couldn’t, SOS benefited from donations. Lee * was one of those donors. A member of the Labour Party then, she used her political connections to push for reform.

Across the country, SOS got together with women’s groups, like REPEAL, to gather thousands of signed petitions calling for reforms in the law. The petitions were collected in Auckland, boxed up, and had to be delivered to Wellington to be considered in parliament. Lee was asked to drive them down there in her new car. 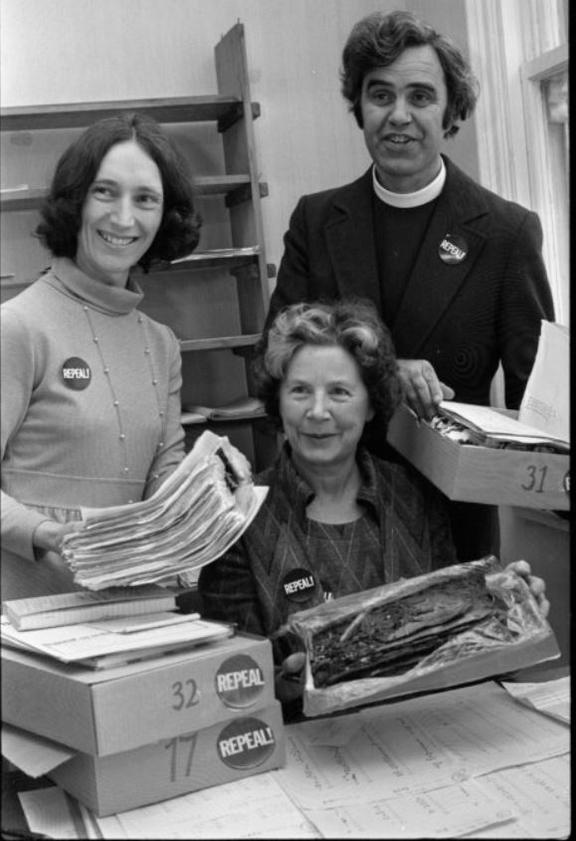 Rev John Murray (director of "Repeal"), Brenda Cutress, and Winifred Everitt (national co-ordinator of "Repeal") with boxes containing some of the 300,000 signatures making up the petition against the 1977 abortion legislation. Photo: Leaders of "Repeal" with some of the petition boxes. Dominion post (Newspaper): Photographic negatives and prints of the Evening Post and Dominion newspapers. Ref: EP/1978/1855/8-F. Alexander Turnbull Library, Wellington, New Zealand. /records/22713416

On the long drive down, Lee stopped in to visit a relative. Over a cup of tea, she noticed a poster on the kitchen cork board, naming her aunt as the secretary of the local branch of SPUC, The Society for the Protection of the Unborn Child.

“Which was the absolute antithesis of what I was hoping for and working for.”

As Lee drove to Wellington, Judy  was boarding a plane to Sydney.

“I think there were about five of six of us, there was a group of us all going over at the same time. We didn’t know each other. There was one older lady, but the rest of us were relatively young. It was really funny because we didn’t talk about why we were there, we just talked about good things in our lives. At the other side a taxi bus took us to the centre, and then at the end of it, it felt like I was free.”

After Lee delivered those petitions to parliament in 1978, areas of the Act were softened and by the 1980s, it was possible for a woman to get an abortion in New Zealand rather than having to travel to Australia. The need for SOS was gone, and the organisation disappeared.

But since then, not much has changed. Abortion is still in the Crimes Act and women still need to prove to two doctors that the pregnancy threatens their life, physical or mental health.

This government is due to review the law this year and there are thousands of women around the country awaiting change, and others hoping to stop it.

We don’t know what the future holds, but Judy knows how she feels about her past.  And there’s one thing she wants to say to the women who helped her back in 1978.

“I never ever said thank you, because I was not in a state to do so, but they’re just awesome. These women bucked the system, and for that they should be celebrated.”

*These women preferred not to use their surnames for this story.