The mighty Manchester United FC go head-to-head in a match with an amateur Auckland team. How do you reckon the game turns out? 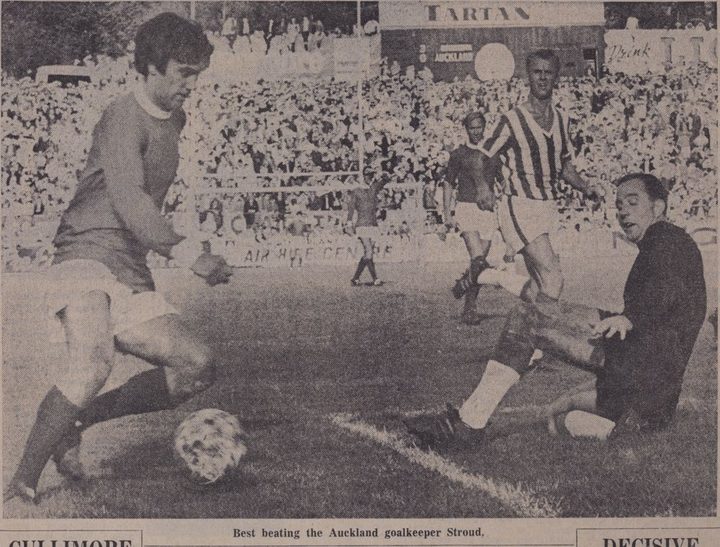 It’s been 50 years since Kiwi footballers  Mark Burgess and Billy Hunter played against probably the best Manchester United team of all time.

But when they turn up at RNZ’s Auckland studios, both men look fit enough for another 90 minutes and are full of memories.

In 1967, their David and Goliath moment occurred when their amateur Auckland XI took the field against First Division champions Man United - at a rugby league ground.

Hello! Hello! We are the Busby Boys!

The Red Devils, as they’re known, were probably the best football team in the world back then. They’d just won the First Division championship (now the Premier league), two of their team were World Cup winners and in the following years, this tough professional team would dominate the European competitions.

By contrast, back then Mark Burgess was a young employee at a trading company and Billy Hunter had just started his own trucking business. Mark had been named New Zealand Footballer of the Year in 1965 and played First Class cricket for Auckland. Billy was a tireless, tough defender, a fearless header of the ball and keen on a bit of “interaction” with opposing players.

The two would fit in training whenever work allowed. Billy recalls parking his truck at Auckland Domain before running to join a training session "then I'd run back to the truck to carry on the day's work."

From the banks of the River Irwell to the shores of Sicily...

In 1967, Manchester United were becoming the mega-brand we know today. The club was near the end of a 10 year rebuilding period after the Munich Air Disaster which killed several of their players and support staff. A young Bobby Charlton and manager Matt Busby survived the crash and were in the squad that arrived in Auckland in late May.

Premiership Football is a different game now and the idea of any top team coming to New Zealand seems far-fetched. Back then Man U regularly took off-season tours but mostly stuck to Europe. But this time United's 12 match tour took in the United States and Australia with two games penciled in for New Zealand, the first against Auckland.

Mark and Billy knew a lot about Man United’s intimidating record, but not much about how they actually played. Remember, this was before live TV broadcasts made it to the other side of the planet. Billy remembers going to the cinema to watch England win the 1966 World Cup final days after the game. 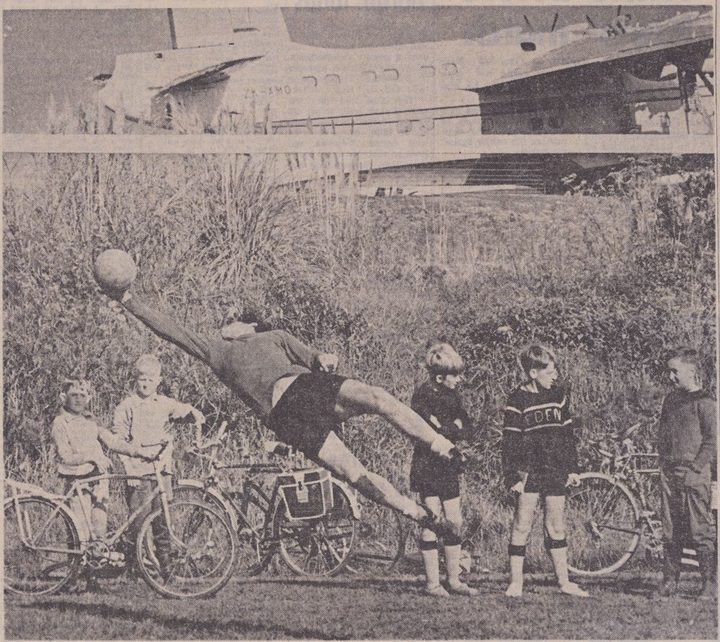 When West Ham United played the Wellington Phoenix in 2014, they fielded what could politely be described as their B-team. But the United squad of ’67 had all their aces; George Best, Denis Law, Bobby Charlton and Nobby Stiles, John Aston and a teenage Brian Kidd, who now manages arch rivals Manchester City. This was a legendary team; Best, Charlton and Law (the United Trinity) were called the Beatles of football.  Manager Matt Busby said his team were in town to win –and to entertain.

Such was the anticipation, Newmarket Park, Auckland’s home of football, was rightly considered not big enough to host the event.  Nearby Carlaw Park was big enough – but it was a rugby league ground. On the morning of the game, and in true Kiwi DIY style, the goal posts from Newmarket Park were trucked to Carlaw and placed in front of the league posts while groundsmen repainted the markings on the pitch.

Neither Mark nor Billy had set foot on the ground before running out for the start of the game. It was 2.30pm on Sunday, 28 May 1967 and 26,000 spectators were in the stands (the most ever at Carlaw Park for any sporting event). Mark remembers being so nervous he could hardly breathe. 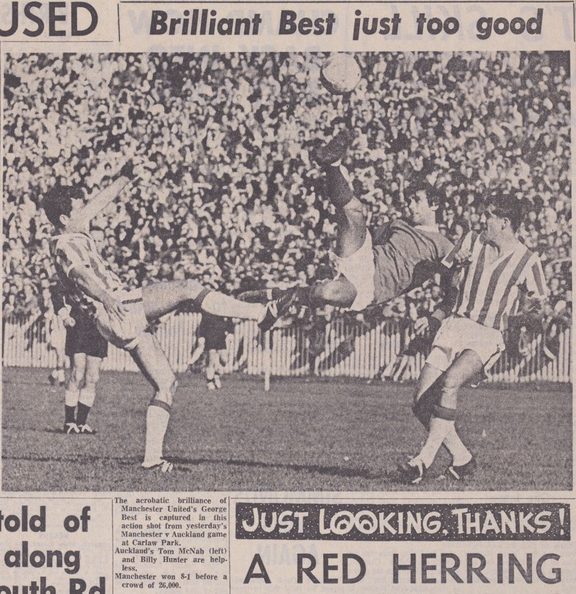 Auckland held their own for nearly 15 minutes before the inevitable began to happen. John Aston scored for United and by half time they were up four goals to nil.  They scored again after the interval but Mark Burgess set up team mate George Lamont for a goal that had the Auckland crowd roaring. Of the goal, Mark says simply “I gave it to George and he smashed it into the back of the net."

Superstar George Best carved up the opposition but came a cropper when he ran into Billy Hunter and another Auckland player. Best ended up on the ground; Manchester United had the penalty. Billy is still a little coy about it, jokingly blaming the other guy but also puts it down to a piece of George Best magic. He says he was going for the ball…

…but it just wasn’t there anymore!"

The final score, eight goals to one in Manchester’s favour, surprised no one but Auckland weren’t embarrassed by their efforts against the best team in the word. The crowd was thrilled by the skills of the United team and diehard rugby journalist TP McLean commented that the All Blacks could use the speed they had shown.  More people saw the Beatles of Football play in Auckland than had shown up for all the Fab Four’s New Zealand shows three years earlier! 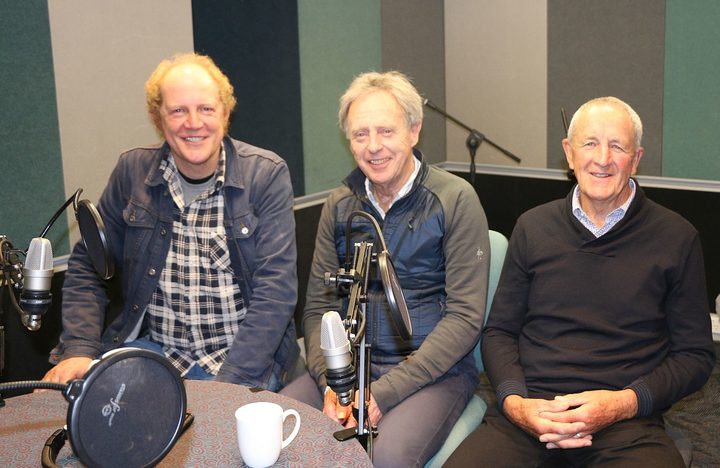 Over a few drinks that night, Billy and Mark got to know the Mancunians a little better and began to see them as people, not gods. Billy puzzled these professionals when he said he wasn’t being paid to play.

(The Man United players) said, ‘Oh, when we want money we just ask the manager and he gives us whatever we want!’

Both men played the next game in Christchurch, where United walloped a sorry New Zealand selection 11 goals to nil.

Billy Hunter played six internationals for the All Whites, ran his trucking company and had a successful business career. Mark Burgess gave football away after 1967 to concentrate on cricket, playing 50 Tests matches and captaining New Zealand before retiring in 1981. 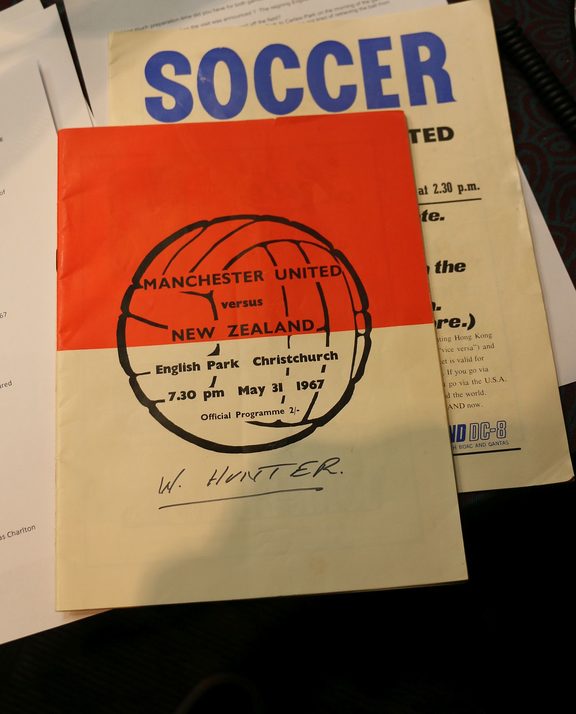 A subdued Manchester United returned to Auckland in 1975 after spending an uncharacteristic season in the Second Division. They won, of course, but by only two goals to nil. But memories remain of Sunday, 28th May 1967 when, some say, the best United team ever, treated Auckland fans to a nine goal fiesta of football.

This story was produced by John Baker and Justin Gregory, using archival audio from Ngā Taonga Sound and Vision. You can subscribe or listen to every Eyewitness podcast on iTunes or at radionz.co.nz/series. Please give us a rating!