Eyewitness producer Justin Gregory remembers the Pope's flying visit and tracks down a special item he left behind... 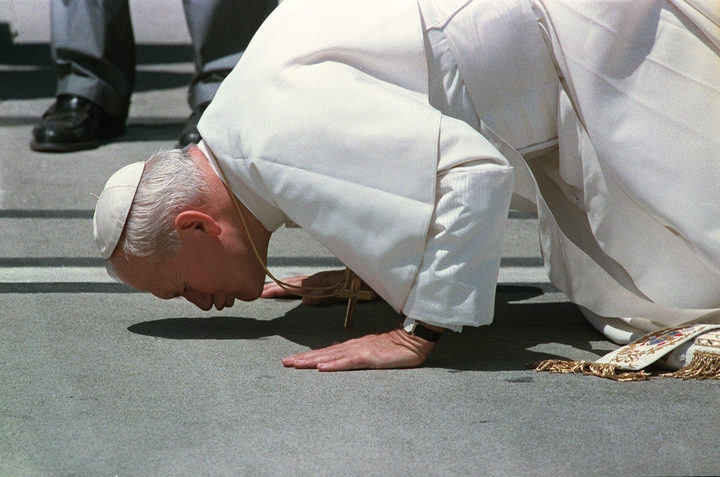 Just 50m from Christchurch's ruined Catholic Cathedral, six shipping containers sit in a row. Behind high fences and securely locked, they store treasures rescued from the cathedral, including the prize we've come to find - a unique piece of papal paraphernalia.

But the containers are not easy to get into.

"Am I allowed to swear?" asks Father Chris Friel, the administrator of the Cathedral of the Blessed Sacrament on Barbadoes Street. 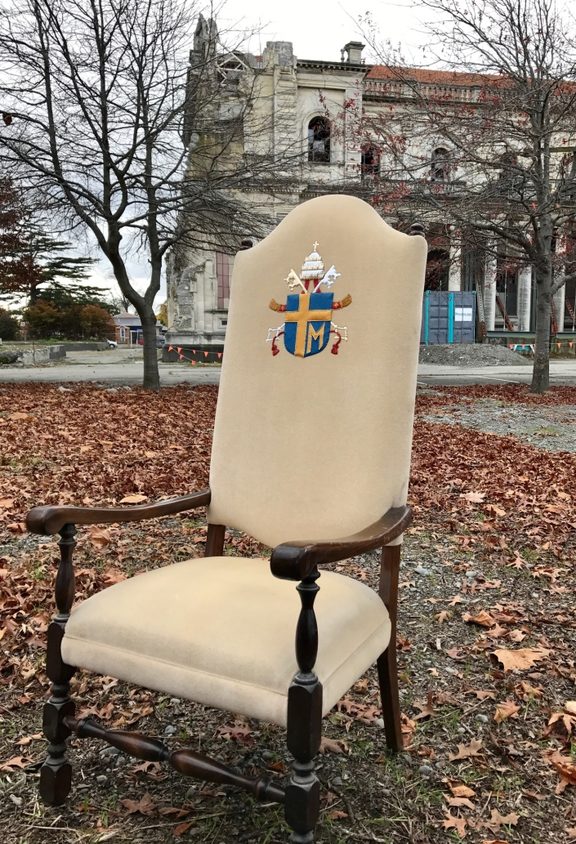 While Father Friel and property and facilities manager Mary Curtis struggle to open one of the containers, he tells me the Cathedral came through the 2010 and 2011 earthquakes reasonably well.

But six months later, cracks in the walls were discovered and engineers warned its dome had to be removed. When this happened, as with Jericho, the walls would come tumbling down.

"The workers were given one hour to get inside and were asked to strip everything from the cathedral that could be taken. These are now all [in] these containers here." - Fr Chris Friel

After a big effort - but no swearing - the container swings opens to reveal its contents, stacked haphazardly on top of each other.

"There we go. There's an organ I can see here, there are vestments, there's a crucifix, a piano...

"...and looking directly at us, is the papal chair used by Pope John Paul II for Mass at Lancaster Park on the 24th of November 1986."

Only one Catholic Pope has ever made the trip all the way from Rome to New Zealand. In 1986 His Holiness Pope John Paul II spent three days in Aotearoa, and the local Church prepared for his visit in a uniquely Kiwi way.

Pope John Paul II flew in to New Zealand on Saturday 22 November 1986. He kissed the ground at Auckland Airport and after a state welcome climbed into our version of the Popemobile - a converted ute - for the drive to Auckland Domain for Mass.

The Pope flew to Wellington that evening and on the next day, a Sunday, battled high winds while celebrating Mass at Athletic Park. He left for Christchurch shortly afterwards. 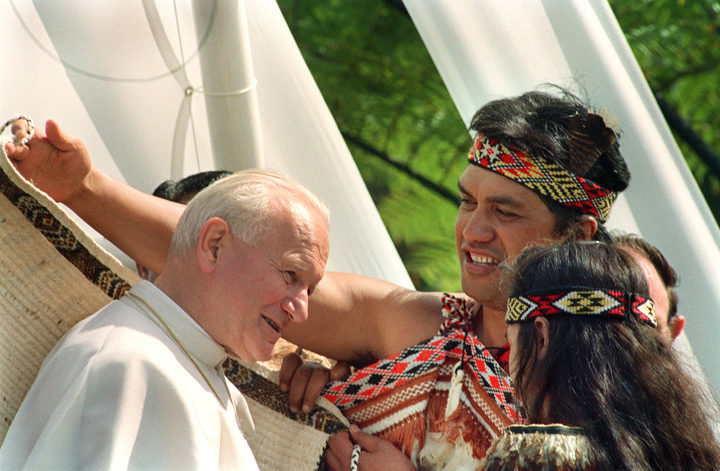 On Monday 24 November, the Pope attended a Liturgy at the Catholic Cathedral, then once more climbed on the back of the ute for the trip to Lancaster Park. The rain popped in to see his Holiness as he led the Mass and drenched the 40,000-strong congregation during a reading from Mathew Chapter 5:45.

"For he causes his sun to rise on bad as well as good...

"...and his rain to fall on honest and dishonest people alike."

To their credit, the crowd laughed. Bless 'em. 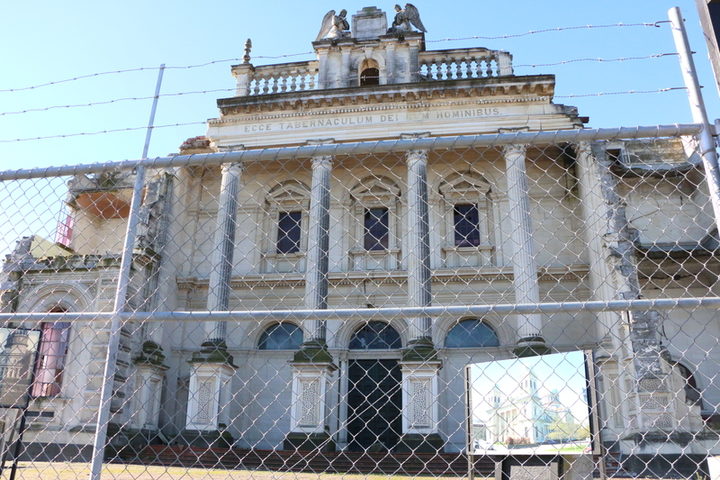 Christchurch had been busy preparing for the Pope's arrival for several months and a network of nuns and Catholic tradespeople were on the job. Sisters from the Carmelite Monastery of Christ the King embroidered the Pope's Coat of Arms onto a piece of cream velvet while cabinet maker Joe O'Neill crafted the frame of a tall, elegant chair. 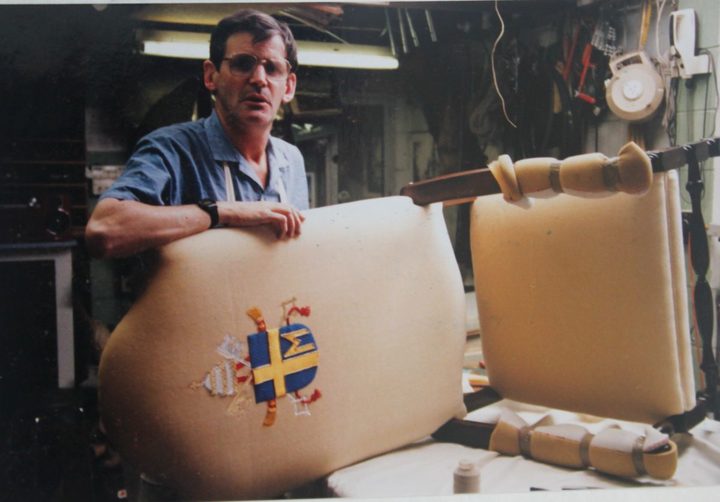 Upholsterer Colin Loach was given the job of putting the pieces together, but by the time the chair was inside his workshop, he had discovered a problem. 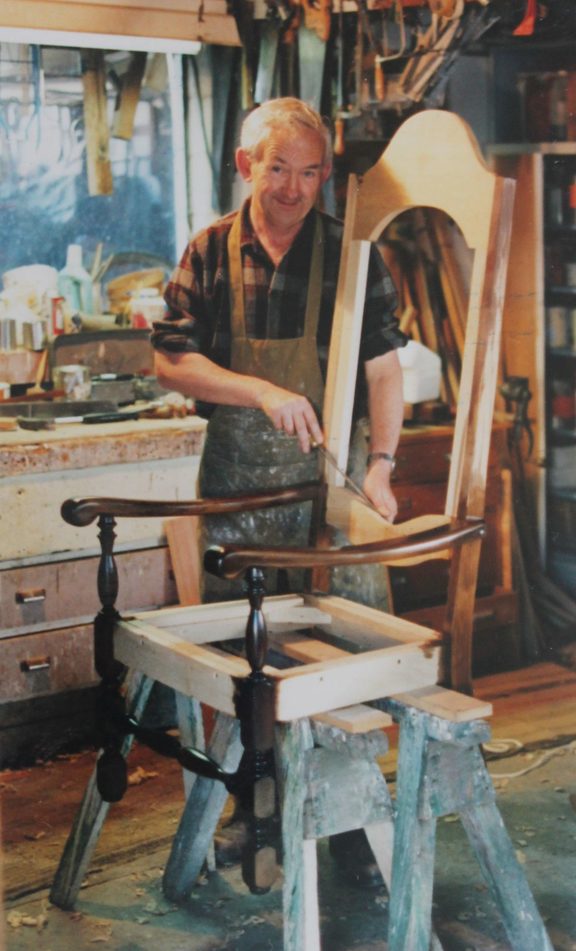 "It was so big that it banged its head on the ceiling," he says. "It was awkward to work with on the bench so I did most of it down on my hands and knees, appropriately. And pure white velvet is probably the worst fabric you could ever work with."

For security reasons, Colin worked on the chair in secret, not even telling his children what he was doing. Before completing it, he slipped something special inside.

For many years he was a tram driver at both Ferrymead Heritage Park and in the city. On the back of a photo of a Christchurch tram he wrote his and Joe O'Neill's details, identifying them as the chair's makers.

"And I stuffed it in among the springs. I must say I was quietly amused to see him there [the Pope, at Lancaster Park] in all his glory. Little did he know he was sitting on a picture of a Christchurch tram!"

And little did the Pope know, someone else had already sat in his chair: Colin’s elderly next door neighbour – a Protestant.

"I sat the chair in front of his door. He wandered out with his leg in plaster and a smoke in his mouth and in his pyjamas, of course. He said, 'What the bloody hell's that?' I said to him, 'It's the Pope's throne'.

"And that was when he collapsed in the chair, had his photo taken and declared himself the world's first Presbyterian Pope!"

John Paul II died on 2 April 2005, and was made a saint nine years later. He remains the only Catholic Pope to make it to our shores.

A full 31 years after he left, his chair is still in good shape. The cream velvet covering's a bit dusty but unstained, while just a few small scratches mar the arms. It's in much better shape than the cathedral that housed it for so many years.

Like its Anglican equivalent, the Cathedral of the Blessed Sacrament awaits a final decision on its future. A rebuild is the preferred option and when - and if - it's completed, all the objects inside the shipping containers will find a new home inside. The Pope's chair, with a photo of a Christchurch tram still stuffed in its springs, will be on display and hopefully safe for another 30 years or more. 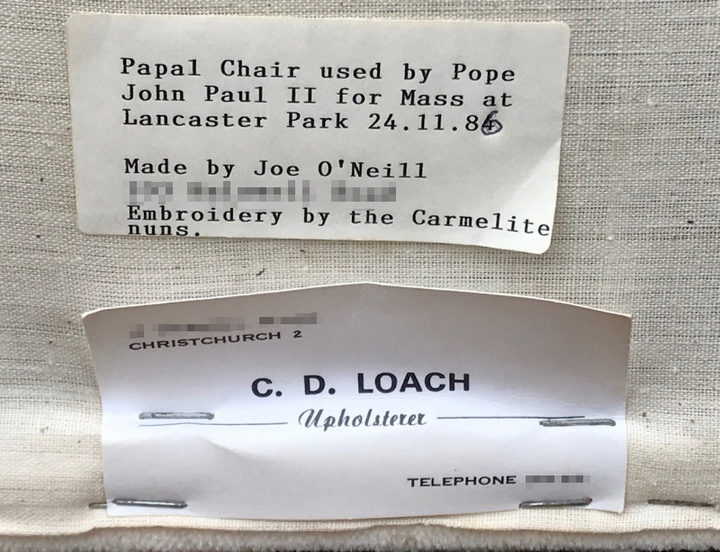 Labels certifying the work of Joe O'Neill and Colin Loach, attached to the underside of the the Papal chair. Photo: Justin Gregory/RNZ.

This story was produced by Justin Gregory and used archival audio from Ngā Taonga Sound and Vision.  You can subscribe or listen to every Eyewitness podcast on iTunes or at radionz.co.nz/series.