In 1999 the people of Timor-Leste or East Timor were given a chance to say yes or no to an independent future. It was the culmination of a quarter-century of struggle. Less than a year after declaring independence from Portugal in 1975, they were invaded by neighboring Indonesia. Resistance began almost immediately. During the occupation, more than 100,000 people lost their lives as Indonesia attempted without success to subdue the people of what they called Timor Timur.

Twenty-four years later, a United Nations-supervised popular referendum offered the East Timorese the choice of becoming either an autonomous province within Indonesia or striking out on their own. The tensions between pro-freedom groups and anti-independence militia exploded after the referendum and would ultimately result in the deaths of nearly 1500 people and the forcible relocation of 300,000 East Timorese across the border into Indonesian-controlled Western Timor.

New Zealander Tim Howard was in Baucau, East Timor’s second largest city, as an official observer in the lead up to voting. He had been there once before in 1996 to make contact with the resistance groups that were fighting against the Indonesian occupiers. And while that had been a time of great danger and secrecy, he tells Eyewitness producer Justin Gregory that on his return to Baucau he immediately noticed a different atmosphere. 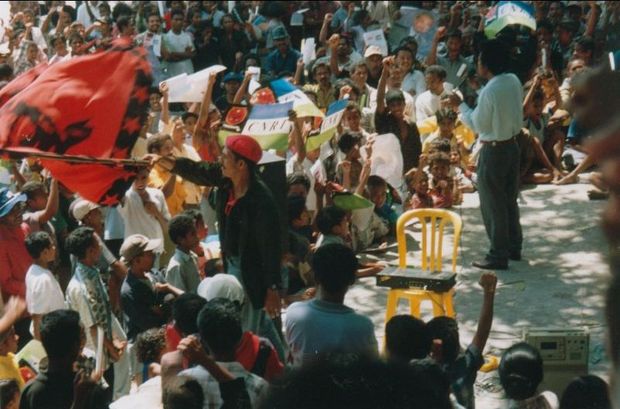 1974 Portugal withdraws its presence as a colonial power from East Timor. Civil war breaks out between various Timorese political factions.

1976 East Timor annexed as the 27th province of Indonesia and renamed Timor Timur.

1991 Indonesian soldiers open fire on protestors at the Santa Cruz cemetery in Dili, capital of East Timor in front of international media. Approximately 200 are killed.

1999 Violence breaks out between pro- and anti-Indonesian groups after the results of a United Nations sponsored referendum are announced. 78% of the voting population choose to reject Indonesia’s offer of greater autonomy in favour of independence. A UN-authorised international military force led by Australia enters the country. Indonesia withdraws and pro-Indonesian militia groups are suppressed. The United Nations Transitional Administration in East Timor assumes administrative control.

2002 East Timor becomes formally independent. Xanana Gusmao is elected and sworn in as the country’s president.

Tim was a Catholic priest until 1993. While working in Samoa in the early 1980s, he was exposed to the situation in Timor by Dom Martinho da Costa Lopes, the head of the Catholic church in Timor. On his return to Aotearoa, Tim linked up with others like Helen Yensen, Maire Leadbeater and Terry Dibble in Auckland to be active in the solidarity movement. Tim went to Timor at the invitation of the resistance movement Fretilin in 1996, again for two months in 1999 as an observer of the preparation and aftermath of the independence referendum with the International Federation for East Timor's Observer Project, and at the ten year anniversary solidarity conference of 2009. Tim is now a member of the international and national solidarity movement with West Papua.