Drive just about as far as the milk tanker goes in Taranaki's eastern hill country and you might come across Kane Brisco flipping tractor tyres.

The sharemilker knows the benefits of keeping fit and is on a mission to help his farming mates and neighbours improve their fitness levels, especially in the run-up to the busy calving season.

When Country Life visited, he was at the tail end of calving and gearing up for another summer season of boot camps and paddock sessions.

Kane says farming used to be a much more physical job and dairy farmers, in particular, now go into a really busy couple of months unfit, after two months of relative downtime when the cows are dried off.

"Everyone goes and grabs the post rammer on the back of the tractor now instead of the spade. That's how it's changed."

They're also busy and, being isolated, can't always make it to a gym in town.

So twice a week from January to July, people turn up at his paddock gym after milking for an hour-long workout.

Kane incorporates equipment from the farm into his workouts, like tractor tyres and old cow shed railings, with elements from CrossFit and strongman events.

"We do what's called a farmer's carry as one of our main exercises so that quite simply is carrying something in both hands, like you would a couple of full buckets of milk to your calves. We add a bit of extra weight on it because it is a really good exercise."

He says tyre flipping is a favourite and there is an array of tractor tyres, "every size for every person."

"Once in a while, if people are feeling a bit frustrated ... they can get the sledgehammer out and give them a good old whack too. That always goes down a treat," he laughs. 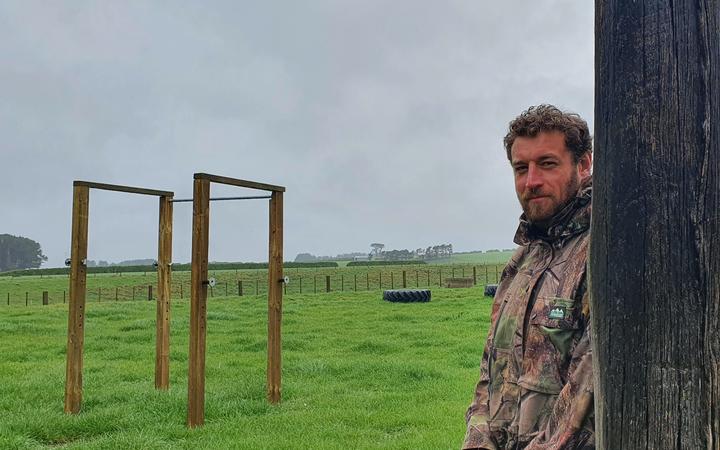 Kane Brisco in his paddock gym Photo: RNZ/Sally Round

Kane says sports have always played an important role in his fitness.

"Being physically fit helps you make good mental decisions on-farm as well. It's been a tool I've always used.

"There's a lot of uncertainty, a lot of change coming. If I can be a part of helping people adapt to that better and be better farmers and, in general, better people, I think that would be pretty cool."