They say playing in the Ranfurly Shield is tough. Down in South Westland they reckon it's not a patch on the Woodham Shield.

"I have played against players from club rugby who are average or good but when they pull on a Woodham Shield jersey they seem to grow another leg, your heart grows bigger," says Rob Wilson, the captain of Whataroa (population 288), one of the power houses of the Woodham Shield right now.

"It becomes another level of rugby where you get normally nice placid fellow turns into an absolute savage for 80 minutes trying to destroy the opposition, sometimes his best friend, to win the shield." 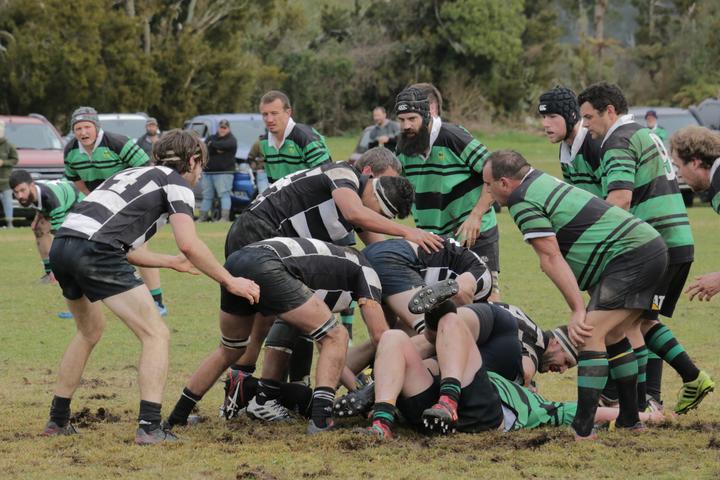 The shield he is talking about is now 71 years old and at the heart of the South Westland community. It honours George Woodham, a keen player and deer hunter, who was accidentally shot while hunting near Hokitika.
Woodham Shield.

He had been going to take over the family farm at Evan's Creek, near Hari Hari.

Every year four teams that make up the South Westland club play off for the shield in a competition that is as much about the areas as the rugby, says Rob Wilson. 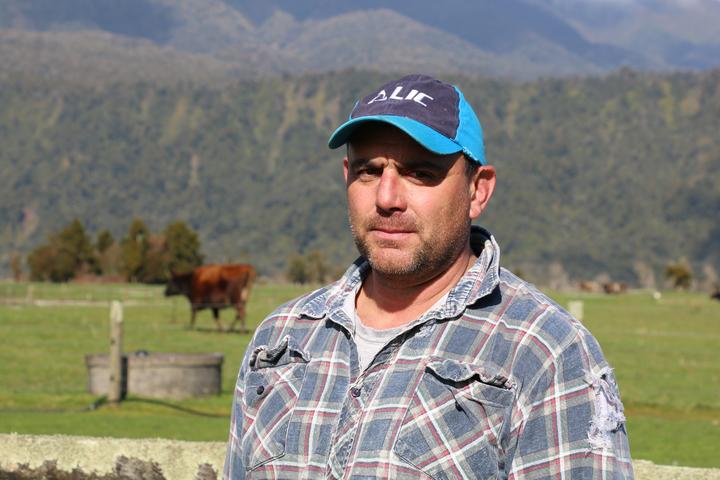 "For us in South Westland, the Woodham Shield is part of our way of life. So on the rugby field you get to express how hard South Westland is. How hard the people are here. We enjoy it when guys from away get on the field in the Woodham Shield jersey. They leave the field knowing they have been in the battle. It's a hard place to be and a hard place to live and the Shield field is where that gets to be expressed by the young men of South Westland - and some old ones, too."

The farmer has been captain of Whataroa for around a decade now. First a wing, then a number eight and now prop.

Asked about the dark arts of the front row, he claims none of that happens in these shield challenges.

"Oh it is very clean in scrummaging in the Woodham Shield. It is next level. Quality rugby and a lot of honour among gentlemen up front. Don't think I could ever remember a disagreement in the front row," he deadpans. 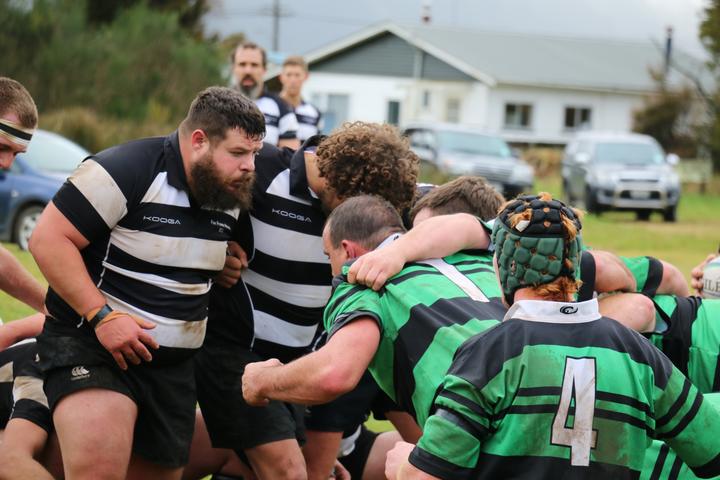 It was a tough battle upfront. Photo: RNZ / Cosmo Kentish-Barnes

The shield is competed for by the four teams of Whataroa, Ross, Hari Hari and a combined team of Haast and Franz Josef and Fox Glacier townships, called South.

Wilson reckons the shield is bred into young boys in the area.

"The first game that you probably watch as a youngster in South Westland is the Woodham Shield. The people before you in South Westland have all done it, too. All the young men aspire to lift the shield for their town. It is something that is bred into us really." 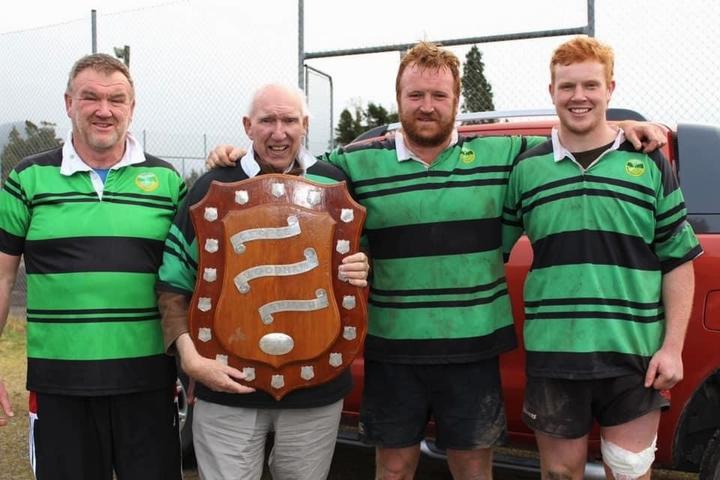 Three generations of the MacRae family have played for Whataroa. Photo: Cheryl Riley

Whataroa dairy farmer Gary MacRae, who played for the shield from 1984 to 2012, says the passion in the area for the competition hasn't diminished.

"It is great to see; my father played for it, I played, and I have got two boys playing today. Each one of those generations would have been playing with the same amount of passion.

"We are just a small area and over the years lost our forestry. We don't have everything here but when it comes to the Woodham Shield everyone gets in behind their team and it is a good day out."

Barry Adamson, 83, and born and bred in Hari Hari, reckons this is among the toughest competition in New Zealand rugby.

"Oh it is tough all right. They talk about tough Ranfurly Shield games, but they have never seen a Woodham Shield game. I tell you. There've been some great games." 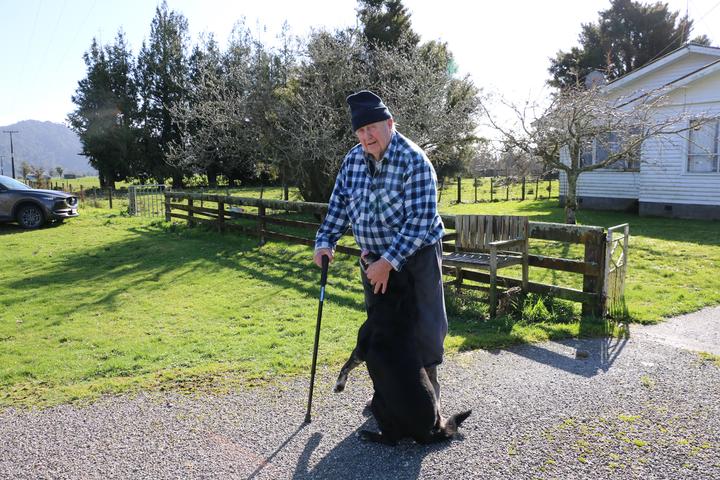 Wilson, the Whataroa captain agrees; "You are giving the shield the respect by showing the opposition that you are going to go your hardest and give your best. They know you have done everything you can. So when you win, you definitely win. But when you lose you feel it."

The games are also a way to lift the spirits and bring the community together, reckons Ben Monk the Franz Josef-Fox-Haast coach, and stalwart of playing for the shield until he "blew a knee out" a while back.

"I remember it as a kid; it was what we all thought rugby was. We lived and breathed it and now to be a part of it is incredible. It is magic to help gel everyone and lift everyone's spirits." 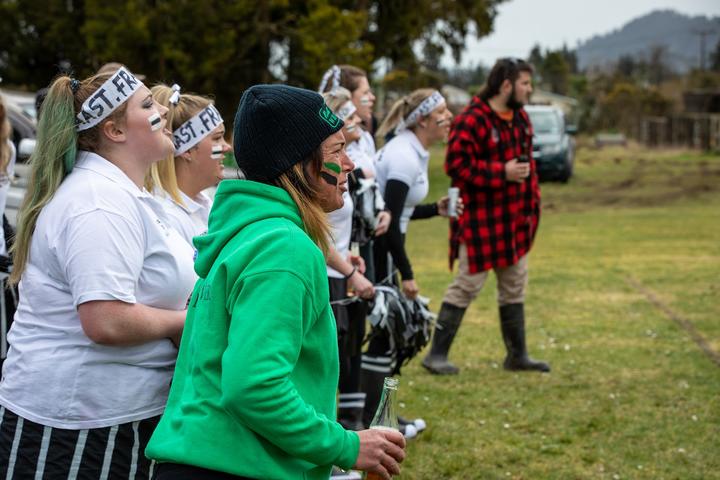 Kay Godfrey, George Woodham's niece, says the shield is a tribute to the people of South Westland; they have kept the memory alive and the passion of the local game.
Supporters on the sideline.

"Each year it means a bit more, as you get older you appreciate it more. My grandparents first presented the shield and I don't think in their wildest dreams they thought the region would be playing for it in 70 years time, and with such passion. It is a tribute to South Westland, that the memory has been kept going for so long."

And who won the shield?

Well, it sits in the Whataroa rugby clubrooms over summer.

For the record, in the final game Whataroa beat South 25-6, though the score blew out in the last few minutes. 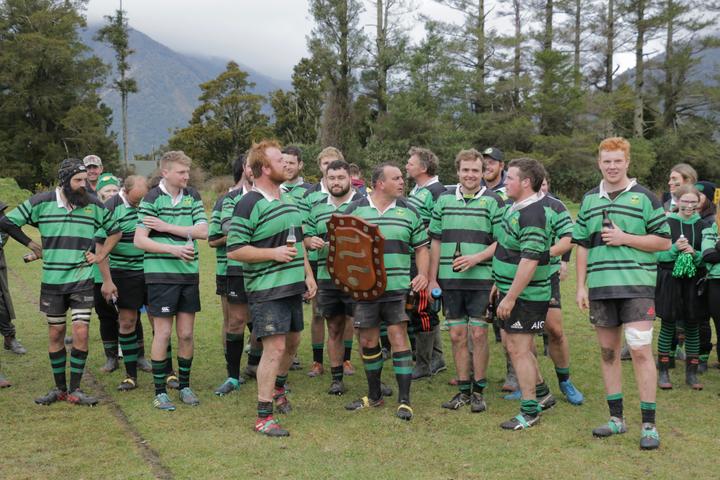 The shield will sit in the Whataroa rugby clubrooms over summer. Photo: RNZ / Cosmo Kentish-Barnes