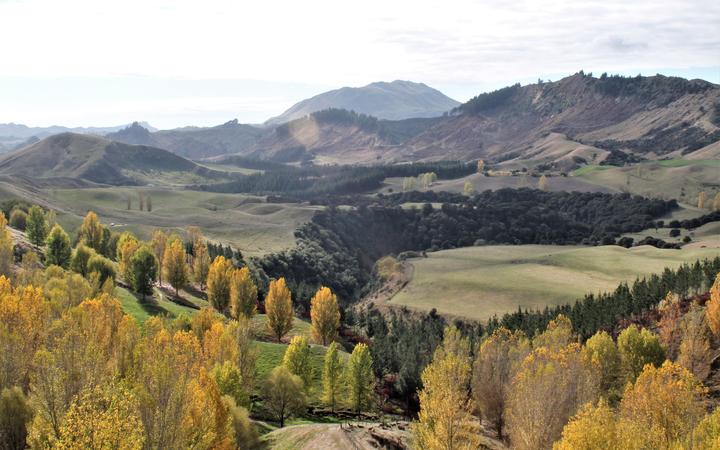 The QEII Trust protected gully (the dark area in centre) winds through the Potters Elsthorpe farm Photo: RNZ/Sally Round

Evan Potter pulls out another chunk of rabbit meat and eases it into the trap.

"This is brilliant because you shoot a rabbit to get rid of one pest and then you use that pest to catch another pest."

Traps are sprinkled along the edge of the gorge which winds through Evan and Linda Potter's 720-hectare sheep, beef and deer farm, Waipapa, near Elsthorpe in Hawke's Bay.

As the trap is set and sprung, Linda emerges from the bush clutching a handful of kowhai seeds.

"She vanishes and then she turns up with these little pockets of treasures," Evan says.

Nearly a quarter of the farm is protected under a QEII National Trust covenant and the couple need to keep on top of the pests - ferrets, possums and feral cats - which damage the regenerating trees and native bird life.

The Potters' passion for biodiversity on their farm and being early to adopt sustainable farming methods have won them the title of National Ambassadors for Sustainable Farming at the Ballance Farm Environment Awards.

They took over the property in 1998 when the kowhai were struggling.

"We called them stick trees back then and that was effectively a result of the possum population."

Evan initiated the first possum control area in the district, involving 50 other farmers.

The couple took out 2800 possums from their own gully in their first poisoning and another 1800, mostly juveniles, within 18 months.

After a fair few years of pest control,  the kowhai are now like a "sea of yellow", Linda says, and the birds have followed.

It was the best use for the land type and a practical way of managing the land with just the two of them on the farm.. 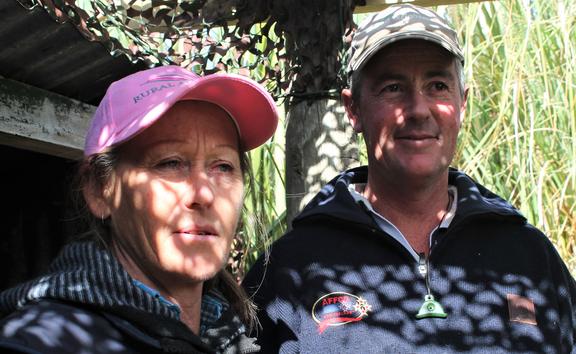 Linda and Evan Potter in their maimai Photo: RNZ/Sally Round

Waipapa is nestled under the jagged peaks of the Silver Range, which has recently been designated an outstanding natural landscape.

It's a tough farming environment with variable soils, steep slopes and an increasingly dry climate.

There's only a tinge of green in the paddocks as autumn slips into winter.

Understanding the challenges and focusing on solutions, as well as growing biodiversity on the farm, contributed to the Potters' win.

Evan says they have a lot more safety valves when dealing with drought for instance.

"Mobs that we can just drop tomorrow. All our cattle are tradeable so we can sell every cattle beast on the farm if we had to and it doesn't change the production system too much."

Product diversification has also served them well although the far-reaching implications of Covid-19 are one of their biggest challenges yet.

They are dealing with a 16 to 40 percent drop in value across everything they sell and Evan says now there are supply chain issues, a shortage of parts for tractors, for instance. 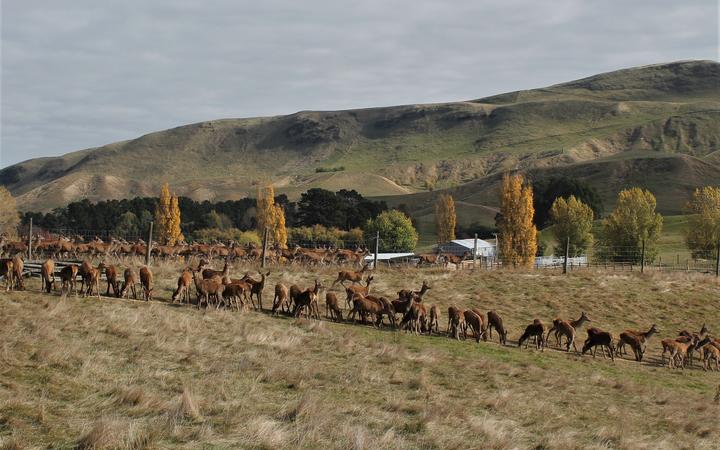 "You really tighten up your business management and work out what comes in has to match what goes out, otherwise it's a short term venture. It's got to be sustainable."

They were bowled over to receive the award as they say they do what they do because it just makes practical sense.

"I guess it's a bit of a responsibility to carry on doing what we're doing, sharing our story with anyone who wants to listen, having an open door policy and an open mind to talk to different individuals that may agree or disagree with us," Evan says.

The Potters are preparing for another round of tree planting this winter and they're hoping more retired areas will eventually look like the mature bush in the heart of the QEII block. 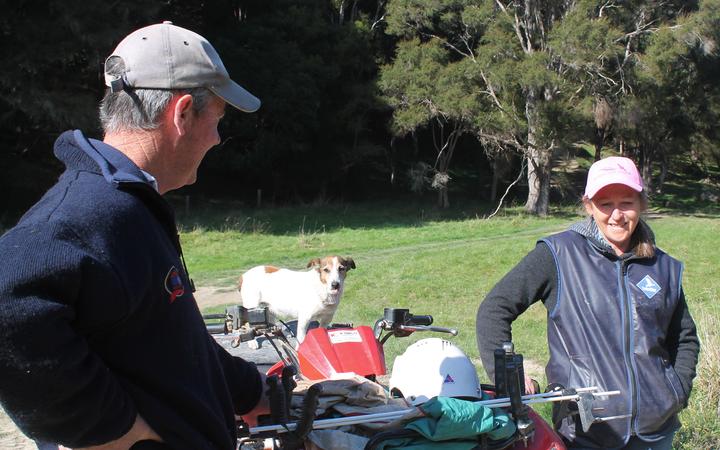